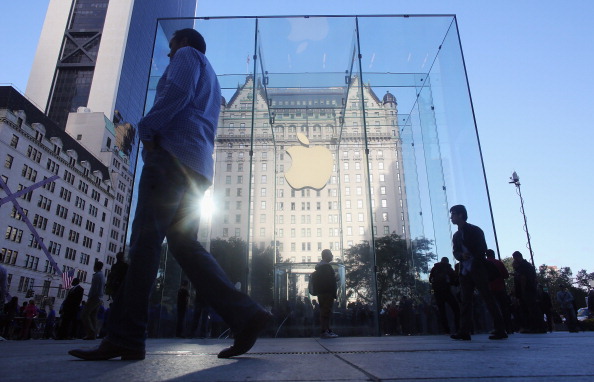 Apple (NASDAQ:AAPL) shares reached a new one-year high of $607.07 in midday trading on Monday as the stock continues to benefit from a substantial boost following the company’s stronger-than-expected fiscal 2014 second-quarter financial results. Apple stock has skyrocketed by nearly 14 percent since the company’s late-April quarterly earnings report. The iPhone maker reported revenue of $45.6 billion and earnings per share of $11.62 for the March quarter, beating expectations of $43.7 billion revenue and $10.19 EPS. Apple’s share price has ranged from $388.87 to $607.07 over the past 52 weeks.

Along with the strong earnings report, Apple also revealed that it was making several changes to its capital return program that may have increased investor excitement. Apple announced that it was increasing its share repurchase program to $90 billion from the previously announced $60-billion level. Apple also boosted its dividend for the second time in less than two years, raising it by approximately 8 percent to $3.29. The upcoming seven-for-one stock split that is scheduled for June 2 may also be helping to drive Apple’s recent gains. Although the split doesn’t change Apple’s overall market value, the lower entry level stock price may increase confidence in Apple by allowing more small investors to have a stake in the company’s future.

Apple’s recent advancement follows Friday’s announcement that the Cupertino, California-based company had reached a limited truce with Google (NASDAQ:GOOG)(NASDAQ:GOOGL) to drop multiple patent-infringement lawsuits against each other. Another rumor reported by the Korea Times this morning suggested that Apple may be seeking a similar settlement with arch-rival Samsung (SSNLF.PK). Earlier this month, Apple concluded its second major patent-infringement trial against Samsung in California that resulted in a nearly $120 million damages award for Apple. However, the amount was much lower than the nearly $2.2 billion in damages that Apple was seeking.

Apple may also be benefitting from recent bullish moves from prominent activist investor Carl Icahn. Last week, a regulatory filing made with the Securities and Exchange Commission revealed that the billionaire had boosted his stake in Apple by another 2.8 million shares last quarter. Icahn now holds more than 7.5 million shares in Apple that are worth approximately $4.5 billion based on Apple’s current stock price.

Finally, investors may also be excited about Apple’s rumored acquisition of premium headphone maker Beats Electronics that is supposedly taking place sometime this week, per sources cited by Re/code. According to the rumors, Apple will acquire Beats for $3.2 billion, the most the iPhone maker has ever paid for a company.