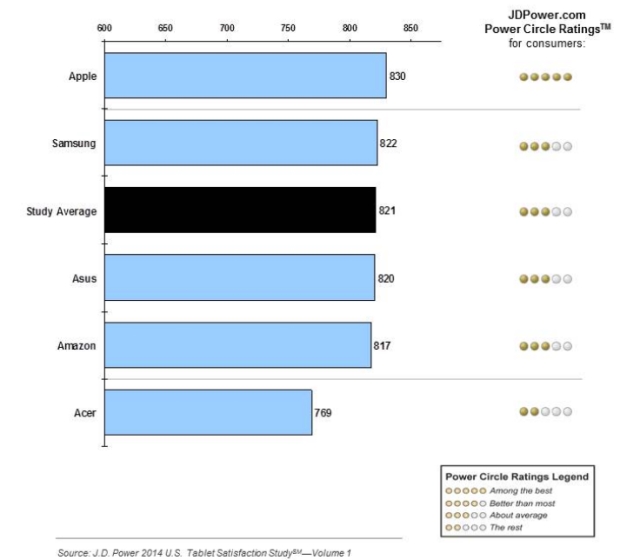 Apple’s (NASDAQ:AAPL) iPad retook the overall top spot in J.D. Power and Associates’ latest study of consumer satisfaction in the tablet market, after losing in the overall rankings to Samsung (SSNLF.PK)  in the previous study, released in the fall. As noted on J.D. Power’s website, the marketing information company measures consumer satisfaction with tablets in five categories, which are listed in order of decreasing importance: performance (28 percent), ease of operation (22 percent), features (22 percent), styling and design (17 percent), and cost (11 percent).

As seen in the graphic above, Apple received the highest overall satisfaction score, 830 on a 1,000 point scale, while second-ranked Samsung received a score of 822. Apple and Samsung were the only tablet makers to score above the average satisfaction score of 821. Apple achieved the highest scores in all of the categories except for cost. Samsung only scored above average in the features, styling and design, and cost categories. In the last study, Samsung received an overall higher score than Apple due to its tablets’ low cost, despite the iPad’s “among the best” scores in four out of five categories.

According to J.D. Power and Associates, the average price of a tablet has dropped to $337 in 2014 from $390 in 2012, a decrease of $53. However, the increasing number of lower-cost tablets has affected overall consumer satisfaction with tablets, especially in the ease of operation category. J.D. Power noted that the average initial set-up time for tablets has increased to 64 minutes in 2014 from 55 minutes in 2012, due to the increased number of features and pre-loaded apps.

“Price has significantly impacted the marketplace,” said J.D. Power and Associates’ senior director of telecommunications services, Kirk Parsons. “The average purchase price continues to drop and consumer expectations of tablet performance and features are different than they were for past products. Subsequently, overall satisfaction has declined, especially with ease of operation, as navigation features and functions have changed.”

Worldwide tablet sales remained essentially flat in the first calendar quarter of 2014, according to data released by market research firm IDC. Apple shipped 16.4 million iPad units, a decline of 16.1 percent from the year-ago quarter. Despite the decline, Apple maintained its lead as the top tablet vendor in the world, with a 32.5 percent market share.

Apple also continues to lead in overall PC shipment numbers when tablets are counted alongside desktops and notebooks. According to market research firm Canalys, Apple was the biggest PC vendor in the world during the March quarter, with more than 20 million units shipped for a 17 percent share of the market. However, it should be noted that the iPad accounted for approximately 80 percent of Apple’s “PC” shipment numbers.

Apple is widely expected to unveil a new version of its flagship iPad later this year. According to a research note from KGI Securities analyst Ming-Chi Kuo obtained by MacRumors, Apple will launch an upgraded iPad Air in the third quarter that will feature an “A8 processor, Touch ID (fingerprint recognition), and main camera resolution of 8MP.” Kuo also predicted that an upgraded iPad mini with Retina display will be unveiled around the same time.