An analyst at Raymond James, who reiterated an Outperform rating and a $600 price target on the stock, suggested that Apple (NASDAQ:AAPL) may be gearing up to launch an iPhone 5S as early as the third quarter of this calendar year.

“A number of component suppliers to Apple have recently indicated an expectation of earlier seasonality this year than last year, both in terms of sluggish orders near term and expectation of growth after a springtime lull,” read a note issued by the analyst. “This appears consistent with at least one new iPhone model (we are presuming iPhone 5S branding) earlier in calendar 3Q this year than the late September launch of the iPhone 5 last year. This should cause much lower iPhone shipments in calendar 2Q and higher shipments in calendar 3Q.”

Like any prediction, the comments should be taken with a grain of salt. Many analysts favor channel checks and supplier activity as a means to gain insight into Apple’s product launch and sales cycles, but accurate prediction remains elusive. The enormous disparity between expectations and reality at the end of the last quarter — partially the result of wonky sales forecasts based on supplier activity — helped catalyze a 12.35 percent crash in the company’s stock price after its actual sales data was released along with its earnings.

On that note, the analyst lowered his full-year 2013 revenue estimate 1.33 percent to $180.96 billion, and increased his earnings estimate fractionally to $43.91 per share. This compares to average revenue estimates of $182.60 billion and earning estimates of $44.52 per share for the same period, making the Raymond James analyst slightly more bearish than average.

Previously, an analyst at Mizuho Securities suggested that a new iPhone model may come by mid-2013, citing supplier checks as well. “While shipments in the March quarter are expected to experience a significant sequential drop, we expect a new version of iPhone in the June-July time frame.” An analyst at Wedge Partners also indicate that checks suggest a July debut for the next iteration of the iPhone. 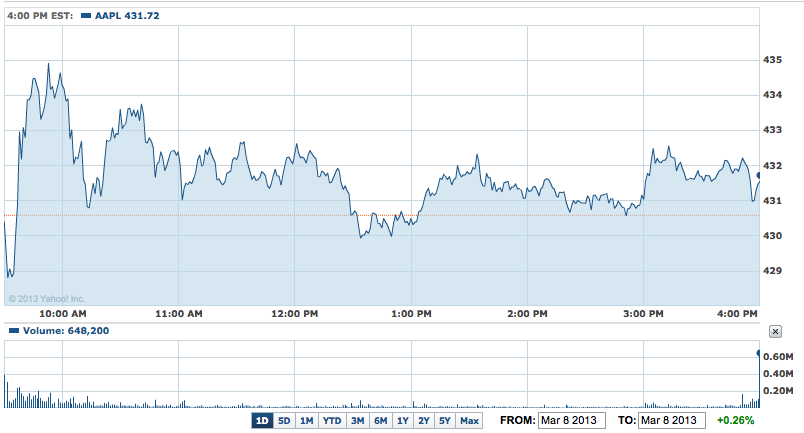 Don’t Miss: Is Time Working Against Apple in the Samsung Patent Trials?