Apple reported its latest round of earnings after Monday’s closing bell. Despite the negative sentiment surrounding the tech giant over the past year, the results beat on the top and bottom line. In addition, Apple managed to push its cash hoard slightly higher to a new all time record.

For the company’s fiscal 2013 fourth quarter, Apple posted a net profit of $7.5 billion ($8.26 per diluted share), down from $8.2 billion ($8.67 per diluted share) a year earlier. Revenue increased from $36 billion to $37.5 billion over the same period. While growth and innovation remain a concern among some analysts, the results topped Wall Street’s earnings estimate of $7.92 per share on revenue of $36.8 billion.

Through all the stock volatility and product rumors, Apple grew its massive cash hoard to a new record-breaking level. Taking the total of Apple’s cash and cash equivalents, short-term marketable securities, and long-term marketable securities, the company’s cash position grew to $146.8 billion, a fresh all time high. In comparison, Apple held a total cash position of $121.3 billion a year earlier. As the chart below from Zero Hedge shows, the fact that Apple is increasing its cash position is just business as usual. 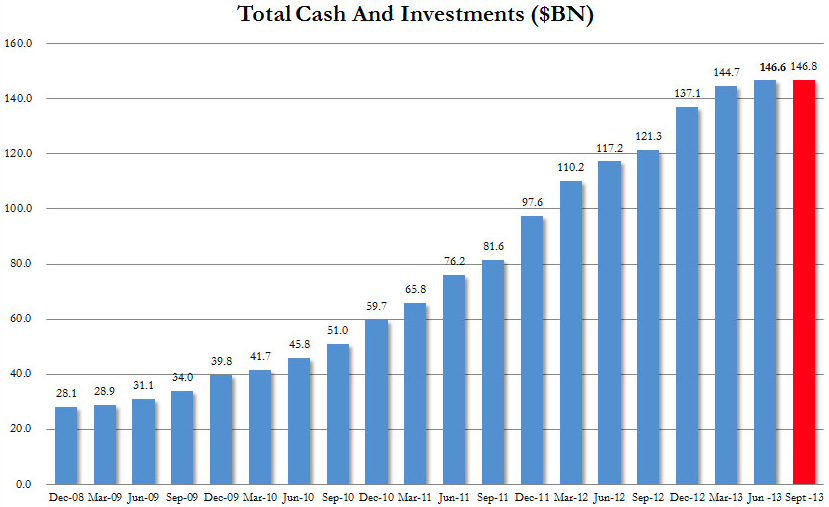 Although Apple grew its cash hoard by $140 million from the previous quarter, it was the slowest sequential growth in at least 5 years. Yet, the company’s total cash position is bigger than the entire market capitalization of Hewlett-Packard (NYSE:HPQ), Dell (NASDAQ:DELL), Netflix (NASDAQ:NFLX), Best Buy (NYSE:BBY), and Pandora (NYSE:P) combined.

“We generated $9.9 billion in cash flow from operations and returned an additional $7.8 billion in cash to shareholders through dividends and share repurchases during the September quarter, bringing cumulative payments under our capital return program to $36 billion,” said Peter Oppenheimer, Apple’s CFO. About $111.3 billion of Apple’s cash pile is held offshore for tax purposes.

Earlier this year, Apple announced the biggest capital return program in market history. In April, Apple’s Board of Directors approved a plan to return $100 billion by the end of 2015, representing a $55 billion increase from the original plan announced last year. It raised its buyback program from $10 billion to $60 billion and hiked its quarterly dividend 15 percent from $2.65 to $3.05 per share. The move marked a bottom for shares and placed more cash in the pockets of shareholders.

As the chart above shows, it has been a volatile year for Apple. Shares started the year at $550 but sank to a 52-week low of $385 in April. Since then, shares have surged more than 35 percent.

Apple is currently the largest dividend payer in the market and holds the achievement of launching the biggest single share-buyback program in history, surpassing previous record-holders Microsoft (NASDAQ:MSFT) and Procter & Gamble (NYSE:PG).