Apple Is King of the Small and Medium Business Market 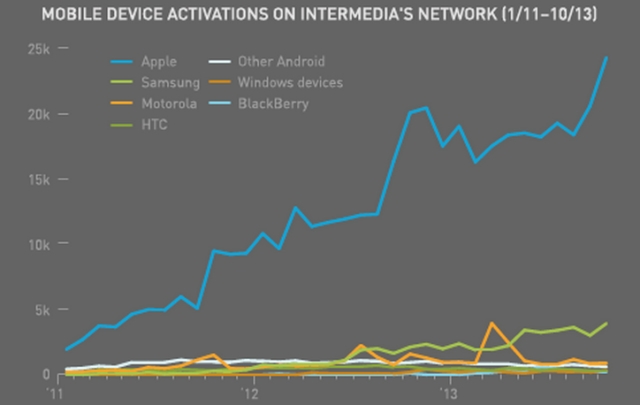 Apple (NASDAQ:AAPL) dominated the enterprise market among small- and medium-sized business, or SMB, customers in 2013 according to the latest data from cloud-services provider Intermedia. As noted by Intermedia, Apple accounted for approximately 190,000 activations during the first 10 months of 2013. This was 76 percent of the total device activations on its network.

In contrast to Apple’s overwhelming majority share, Samsung (SSNLF.PK) only accounted for 29,000 activations, or a 12 percent share of the total device activations. However, the Korea-based smartphone maker was still far ahead of the other Android, Windows, and BlackBerry (NASDAQ:BBRY) device runner-ups. For example, Google’s (NASDAQ:GOOG) Motorola was a distant third place with a 5 percent share, while “other Android devices” accounted for a three percent share.

Although Apple is dominating the SMB enterprise market, Intermedia noted that each device vendors’ growth didn’t appear to come at the expense of another. In other words, the overall growth of the mobile enterprise market accounted for the expansion of each vendor’s user base. However, Apple’s user base was much larger than the other vendors’ user bases.

Besides showing Apple’s dominance of the SMB market, Intermedia’s data also showed that businesses preferred the iPhone 5S over the iPhone 5C, despite the higher cost of Apple’s flagship device. In October — the first full month after the new models were released — there were only 1,521 iPhone 5C activations. In contrast, there were 6,906 iPhone 5S activations. Intermedia suggested that the activation rate difference may be due to business owners placing a premium on increased functionality, or simply due to buyer confusion about “competing plans and prices offered by mobile providers.”

One of the iPhone 5S functionalities that SMB customers may be attracted to is the Touch ID fingerprint scanner that provides an easy method for enterprise users to secure their business devices. Although Intermedia anticipated that the BYOD (bring-your-own-device) trend in the workplace would lead to an activation spike around the holidays, the cloud-services provider found no significant correlation. Instead, activations tended to increase according to vendor release cycles. As the largest device brand on Intermedia’s network, Apple’s iPhone and iPad launches both initiated significant activation spikes.

Although Apple dominated the SMB enterprise market in 2013, Intermedia warned that Samsung and Microsoft (NASDAQ:MSFT) could pose threats in the “medium term.” Samsung is beefing up its mobile security with its KNOX security software, while Microsoft saw 93 percent growth during the year, despite accounting for only 1 percent of total activations.