Apple (NASDAQ:AAPL) maintained its second-place ranking in the worldwide smartphone market in the second quarter of 2013 with a 13.2 percent share, according to the latest data from market research firm IDC. Meanwhile, Android increased its market share to 79.3 percent from 69.1 percent in the same quarter last year. Android-based unit shipments also grew by 73.5 percent in the last quarter.

Although the iPhone maker saw a 20 percent decline in unit shipment numbers from the year-ago quarter, Apple’s standing in the global smartphone market is still strong considering that the company did not even launch any new products in the last quarter. Last year Apple had a 16.6 percent share of the worldwide smartphone market. 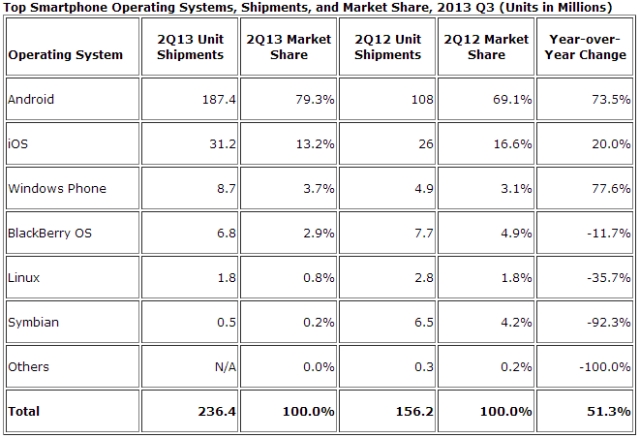 “The iOS decline in the second quarter aligns with the cyclicality of iPhone. Without a new product launch since the debut of the iPhone 5 nearly a year ago, Apple’s market share was vulnerable to product launches from the competition,” stated Llamas. “But with a new iPhone and revamped iOS coming out later this year, Apple is well-positioned to re-capture market share.”

On the other hand, Android’s numbers were boosted by the release of Samsung’s (SSNLF.PK) new Galaxy S4 last quarter. IDC also noted that Android was helped by substantial growth in Asia. The Korea-based LG and three Chinese smartphone vendors accounted for 62.5 percent of Android’s growth last quarter. In this sense, Android seems to be doing best in markets that are less penetrated by Apple.

Recent smartphone market data from comScore’s (NASDAQ:SCOR) MobiLens service seems to bear this conclusion out. MobiLens found that Android’s growth in the U.S. market remained stagnant last quarter while Apple’s iOS increased its share of the market by 0.9 percentage points.