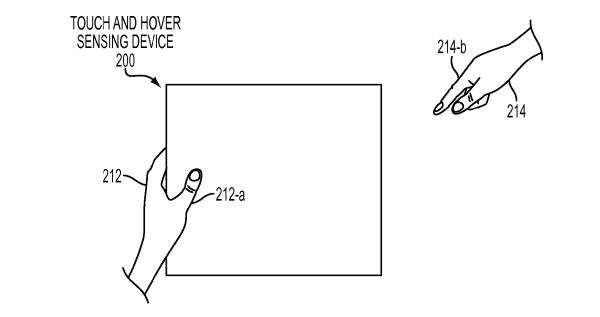 For example, a panel may not register a user’s intended “hover event” if the event is masked by an incidental touch. This often occurs when the user’s hand that is holding the device accidentally touches the edge of the screen. In the patent, Apple outlined a method that would allow the device to discern the user’s intent based on certain input thresholds.

After it determines the user’s intent, the system then compensates for the unintended touch event by adjusting the baseline of the touchscreen sensors. Conversely, if the system determines that it was an intended touch, it will make adjustments that ensure both events are detected. In the patent, Apple said, “These and other approaches can advantageously provide improved touch and hover sensing.”

Apple’s second patent is called “Seamlessly embedded heart rate monitor.” As suggested by the title, the patent covers a method that would allow an electronic device to detect “a user’s cardiac activity and cardiac electrical signals.”

But rather than using wires, the device would utilize leads embedded in the device’s housing that would enable it to read electrical signals from the user’s skin. According to Apple, this patented technology could potentially be used for biometric security purposes, similar to how the Touch ID fingerprint scanner is currently used in the iPhone 5S.

“Using the detected signals, the electronic device can identify or authenticate the user and perform an operation based on the identity of the user,” Apple said in the patent. The document also suggested that the device could be used to “determine the user’s mood from the cardiac signals and provide data related to the user’s mood.”