Apple’s iPad Business Is Anything but Dead 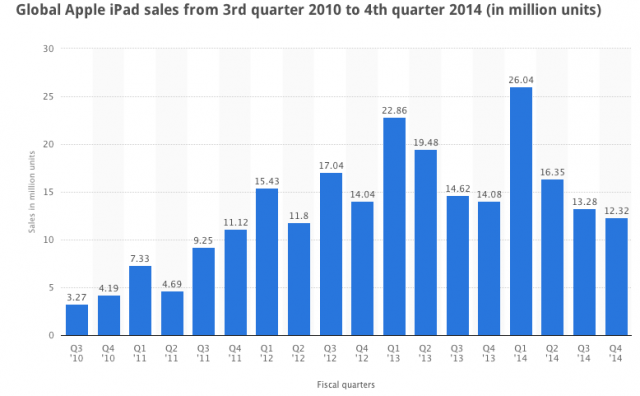 The world’s most valuable company continues to receive more than its fair share of sensationalism. Apple’s iPad business recently came under scrutiny after posting a lackluster quarter. Headlines used “crash” and “tank” to describe sales figures, while others suggested the end was near for the tablet. However, the death of the iPad is over-exaggerated.

The International Data Corporation (IDC) expects full-year iPad shipments to decline for the first time in its history. In fact, Apple’s performance is a major reason why the IDC estimates that the worldwide tablet market will slow to a 7.2% growth rate this year, compared to a 52.5% pace in 2013. Nonetheless, the slowdown is hardly unwarranted or crippling. Despite their similar appearances, tablets do not have the same life cycles as smartphones.

“In the early stages of the tablet market, device life cycles were expected to resemble those of smartphones, with replacement occurring every 2-3 years. What has played out instead is that many tablet owners are holding onto their devices for more than 3 years and in some instances more than 4 years,” explained Ryan Reith, Program Director with IDC’s Worldwide Quarterly Mobile Device Trackers. “We believe the two major drivers for longer than expected tablet life cycles are legacy software support for older products, especially within iOS, and the increased use of smartphones for a variety of computing tasks.”

The two reasons given for longer life cycles actually sound like benefits for Apple. Legacy software support helps build customer loyalty, and the increased use of smartphones is a major catalyst for the iPhone lineup, which accounts for the majority of Apple’s profits. Furthermore, Apple is not exactly resting on its laurels. Apple and IBM have formed a partnership to create a new class of business apps. IBM will also sell iPads and iPhones to business clients worldwide.

On the October earnings conference call, Apple CEO Tim Cook reminded analysts and investors that the iPad has sold a staggering 237 million units over the past four years. That is more than twice the number of iPhones sold over its first four years, and a huge crowd of potential buyers for future models. The life cycle of these iPads is still being discovered, but Cook sees the recent slowdown as a “speed bump” instead of a fatal issue.