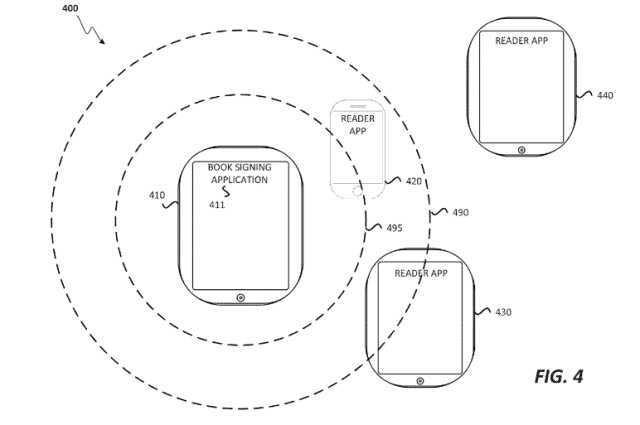 Apple (NASDAQ:AAPL) outlined a unique system that would enable an author to embed his or her autograph into a user’s digital media in a recently published patent uncovered by Apple Insider. In a patent titled “Embedding an Autograph in an Electronic Book,” Apple notes that e-books have many notable advantages over traditional printed books.

In order to add this capability to e-books, Apple developed a method for authors to embed an autograph into digital media. However, Apple’s system would also take advantage of the multimedia capabilities of digitally stored content by allowing the author to embed “text, audio clips, images, photo albums, videos, or other media items” in addition to traditional autographs.

In one embodiment, Apple describes an “autograph hot spot” in which a reader’s device could receive an autograph from the author’s device based on their proximity to each other. In this sense, an e-book signing event would appear to be very similar to a traditional book signing event. Apple also outlined a method for “virtual signings,” where the author can sign e-books via a chat room or instant messaging.

In order to facilitate this process, Apple proposes an autograph-generating app that would allow authors to produce their autograph and embed it into a user’s digital content. Some embodiments allow the author to create their autograph by using their finger or a stylus on a touchscreen. Other methods utilize a capture application that would save handwritten autographs in a digital format.

Although Apple primarily describes a method for autographing e-books, the patent also notes that “The systems and methods can be altered to also work with other media, such as music albums, music tracks, movies, applications, or other consumable digital media stored on a user’s electronic device.”

Although it is not known if Apple has any plans to implement this autograph system in its iBookstore, the patented autograph system could possibly give the Cupertino, California-based company a competitive advantage over other e-book retailers.