Does Corporate America Still Have a Bad Reputation?

Harris Interactive, a New York custom market research firm, recently conducted its 14th annual Reputation Quotient Study. The report asked more than 14,000 people to select companies that are most visible to them on a daily basis. The respondents were then asked to rank the top 60 most visible companies by 20 attributes folded into 6 dimensions. Technology remains the highest-rated industry in corporate America, but the number of companies with great reputations continue to decline.

The report is based on attributes such as admire and respect, trust, clear vision, growth prospects, high quality and supports good causes. These can all be difficult to find in major corporations. According to the RQ study, 44 percent say the overall reputation of corporate America is either poor or very poor, while only 28 percent say it is excellent or good. Twenty-three percent of respondents say the overall reputation is fair.

Show your portfolio some love! Click here now to get our stock picks at our Valentine’s Day special price. 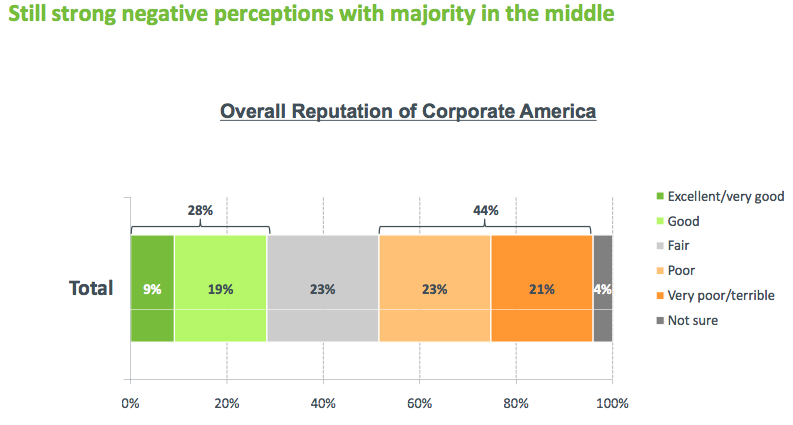 Robert Fronk, executive vice president of reputation management at Harris Interactive, explains in a statement, “The public seem to have become pragmatically realistic with their expectations of corporate America, and we characterize this year’s overall findings as the great muddling of corporate America.”

The perceived change in the reputation of corporate America has changed very little year-over-year. In 2013, 36 percent of respondents said reputation stayed the same, compared to 31 percent in 2012. 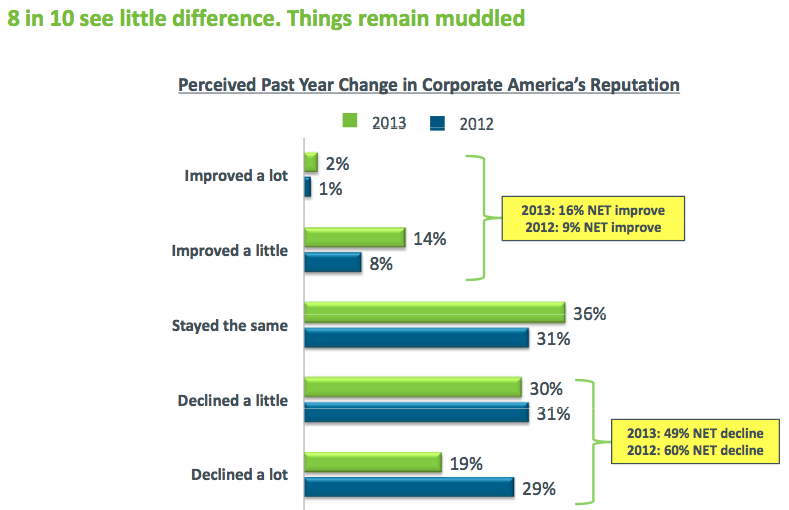 The number of great companies are in decline…

Companies with a RQ score above 80 are considered to be excellent. Unfortunately, the number of companies in this category peaked in 2011 at 16. Last year, the list was cut in half to only 8. Now, the excellent list only stands at 6. 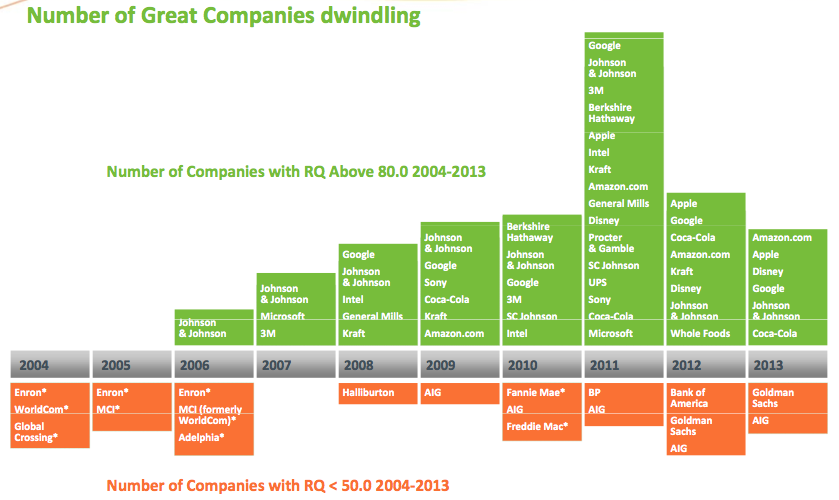 Amazon.com (NASDAQ:AMZN), Apple (NASDAQ:AAPL), Disney (NYSE:DIS), Google (NASDAQ:GOOG), Johnson & Johnson (NYSE:JNJ) and Coca-Cola (NYSE:KO) all posted RQ scores above 80 this year. Amazon edged out Apple for the top spot, with a score of 82.62, compared to Apple’s 82.54. It receives nearly 100 percent positive ratings on all measures related to trust. Meanwhile, Google has been rated in the top five for eight consecutive years.

“Our results show that Amazon has managed to build an intimate relationship with the public without being perceived as intrusive,” adds Fronk. “And as the company that is so widely known for its personal recommendations, more than nine in ten members of the public would recommend Amazon to friends and family.”

To little surprise, major financial firms still rank poorly among the public. Goldman Sachs (NYSE:GS) and American International Group (NYSE:AIG) were at the bottom of the reputation list for the second consecutive year, with scores of 49.39 and 48.57, respectively. Bank of America (NYSE:BAC) received a low score of 55.85, but it was the most-improved company compared to the previous year, when it received a score of 49.85.

Investor Insight: How Cash-Strapped are Americans?