Does This Leak Prove the iPhone 5C Is Ready to Launch? 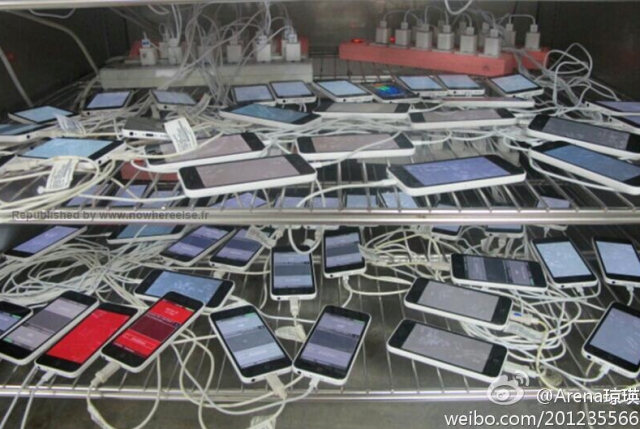 As the expected September 10 launch date for the next generation of iPhones draws closer, it seems that the number of supply chain leaks is proportionately increasing. The latest leaked image to emerge online appears to offer even more evidence that Apple (NASDAQ:AAPL) is finalizing its iPhone 5C preparations for an early September launch.

Once again, the Chinese microblogging site Weibo is the source of the latest leak, via the French website Nowhereelse.fr. The image purports to show dozens of plugged in and activated iPhone 5Cs as they undergo final testing.

According to Steve Hemmerstoffer at Nowhereelse.fr, the photo was taken by a Pegatron employee who handles quality assurance. The phones are being tested for “their capacity and their general operation,” he noted.

All of the iPhone 5Cs depicted in the photo appear to have white plastic rear shells. Hemmerstoffer is convinced that the images are authentic, although he noted that the black border surrounding the screen of the white iPhone 5C “seems suspect.”

The iPhone 5C’s plastic construction is a marked departure from Apple’s typical high-end smartphone design. However, many analysts believe that a lower-cost iPhone will help Apple capture a larger share of emerging smartphone markets. For example, Morgan Stanley analyst Katy Huberty recently noted that the iPhone 5C could start Apple “on the path to smartphone market share leadership” in China.