The iTunes Store has become a significant source of income for Apple (NASDAQ:AAPL) as well as the center of the Cupertino, California-based company’s ecosystem. Apple Senior Vice President and Chief Financial Officer Peter Oppenheimer noted the iTunes Store’s “strong growth in revenue in both content and apps” during the company’s third-quarter earnings call.

Using newly available iTunes information, Apple analyst Horace Dediu at Asymco offered his observations and estimates about Apple’s lucrative online digital media store. Although the “total quarterly revenue of $4 billion from iTunes software and services” was slightly less than last quarter, Dediu said in a note that this quarter is still the “second highest after $4.1 billion last quarter.”

Other than the television and film entertainment content that fuels the iTunes Store, Apple also sells an incredible amount of mobile apps through its App Store. “Our developers have now created more than 900,000 iOS apps including 375,000 apps made for iPad,” Oppenheimer said in the earnings call. 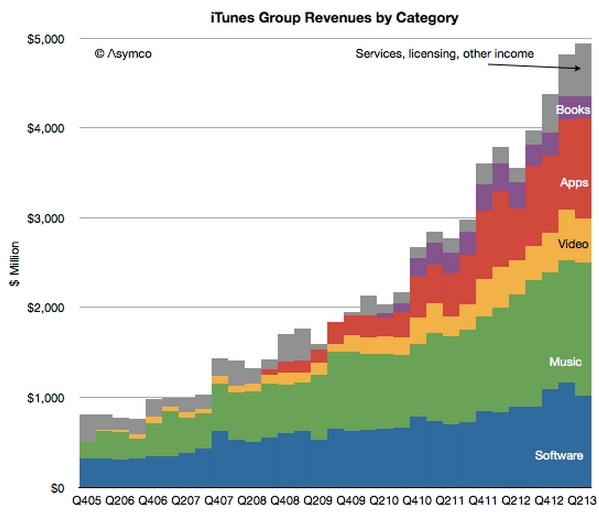 Dediu also noted the exceptional growth of the App Store, which “continue[s] to accelerate with a near doubling of revenues.” He pointed out that more than half of the $11 billion that has been paid to app developers was earned in the past four quarters.

On the other hand, “Book revenues are contracting as pricing pressure is being felt,” Dediu wrote. After a federal judge ruled that Apple violated antitrust laws when it conspired with multiple publishers to fix prices in the e-book business, the Department of Justice presented a proposal to the court that is designed to prevent further anticompetitive conduct in Apple’s e-book business. This proposal is likely to further squeeze Apple’s revenues in the e-book business.

Still, Dediu estimates that music revenue growth remains steady at 15 percent, while video revenue growth remains at about 25 percent. Oppenheimer also highlighted the positives in the third-quarter earnings call, saying, “iTunes users have downloaded more than 1 billion TV episodes and 390 million movies from iTunes to-date, and they are purchasing over 800,000 TV episodes and over 350,000 movies per day.”