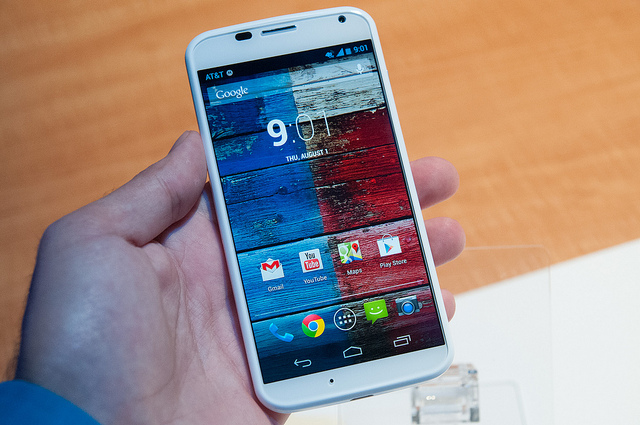 Google’s (NASDAQ:GOOG) Motorola Mobility celebrated the new year by lowering the price of its flagship smartphone to $399. Motorola Senior Vice President of Product Management Rick Osterloh made the announcement on Wednesday via Motorola’s blog.

“[W]e’re offering Moto X at an everyday starting price of just $399 on any major US carrier, without a contract,” wrote Osterloh. “This includes customized devices.” The Moto X previously sold for $550 without a service contract subsidy.

As noted in the blog post, the company briefly offered the 16GB Moto X for $349 during so-called “holiday flash sales.” However, the new $399 price is a permanent reduction. Osterloh also pointed out that consumers could potentially “save hundreds of dollars over two years” by combining the new Moto X price with “good month-to-month or prepaid service plans” offered by some wireless carriers.

As reported by The Wall Street Journal, the Galaxy S4 is currently the most popular of the high-end Android-based smartphones on the market. Samsung’s 16GB Galaxy S4 costs $599.99 without a service contract at Verizon (NYSE:VZ). Similarly, the unlocked and contract-free version of Apple’s (NASDAQ:AAPL) 16GB flagship iPhone 5S costs $649 at T-Mobile (NYSE:TMUS).

Although the Moto X price reduction may help the Google-owned subsidiary sell more devices, Motorola will also receive less profit per device than rival smartphone vendors. According to TechInsights’ cost estimates cited by The Wall Street Journal, the Moto X and the Galaxy S4 both contain about $200 worth of components.

Besides deriving more profit per device, Samsung has also sold far more devices than Motorola. According to data from market research firm Gartner, Samsung accounted for 32.1 percent of worldwide smartphone sales, with more than 80 million units sold in the third quarter. According to Strategy Analytics’ data, also seen by the Journal, Google’s Motorola only sold around 500,000 units during the third quarter, after the device was released in August.