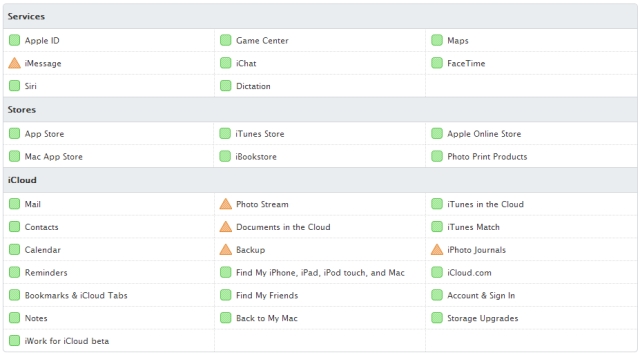 Apple’s (NASDAQ:AAPL) iCloud has been hit by yet another troublesome outage that began early Thursday morning around 12:30 a.m., reports Apple Insider. The outage is still ongoing and has affected multiple services, including iMessage, Photo Stream, Backup services, and iCloud document access.

According to Apple’s system status page, “Users may be unable to use iCloud Documents, Photo Stream, iPhoto Journals, or Backup & Restore. Users may also be unable to send or download attachments in iMessage.” Users were also unable to create new Apple IDs during a 15 minute period late Wednesday night. Although Apple states that the outage has affected “less than 1 percent of users,” it should be noted that Apple’s iCloud has over 300 million total users. This puts the potential number of affected users in the millions.

Apple Insider notes that Apple had an even larger iCloud and iTunes outage in June that affected approximately 20 percent of users, although that service interruption only lasted about an hour and a half. Apple experienced a similar iCloud outage in April that briefly affected Game Center and iCloud-linked mail accounts.

Although relatively few and far between, Apple’s recent iCloud outages have drawn attention to Apple users’ increasing reliance on this crucial service. According to a Strategy Analytics study, Apple’s iCloud and iTunes Match cloud storage services combined accounted for 27 percent of the total cloud storage usage in the U.S. last October.