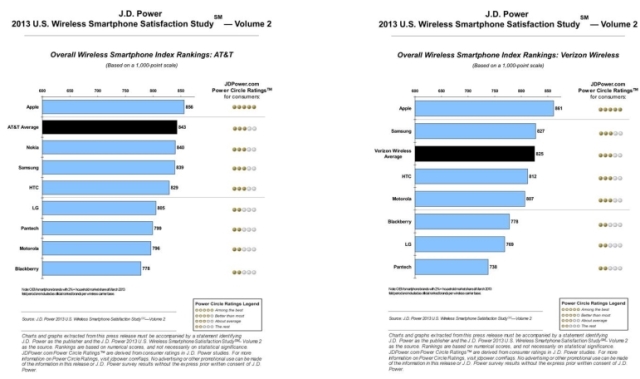 According to the 2013 U.S. Wireless Smartphone Satisfaction Study Vol. 2, Apple’s iPhone was the top-ranked device for customer satisfaction at both AT&T and Verizon, with scores of 856 and 861, respectively. Apple was the only smartphone maker to rank above the average satisfaction score of 843 at AT&T, while Apple and Samsung (SSNLF.PK) both scored above average at Verizon.

Apple wasn’t included in T-Mobile’s satisfaction ratings since the study started in February, two months before the carrier began offering the iPhone. Among the remaining brands, Samsung was the only one to rank above T-Mobile’s average customer satisfaction score of 825.

Apple fared the best of any smartphone maker, with above-average scores at every carrier for which it was qualified to be ranked. The study was conducted between February and August and measured customer satisfaction according to four factors: performance, physical design, features, and ease of operation.