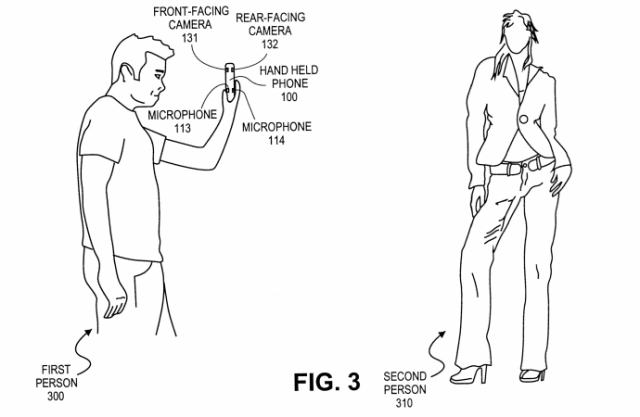 Apple’s (NASDAQ:AAPL) iPhones may soon acquire a built-in “cameraman” feature that will automatically choose which camera to use depending on the situation, reports Apple Insider. In a patent titled “Automatic Video Stream Selection,” Apple outlines a method that allows a “handheld communication device” with front and rear-facing cameras to process video from both cameras simultaneously and automatically select which video to stream.

While this method could obviously be used to improve Apple’s FaceTime feature, it could also transform iPhones into intuitive recording devices in situations where users need to switch between cameras for different speakers or for other reasons. In one embodiment, the iPhone will automatically detect which camera to stream video from based on visual or audio cues.

For example, the iPhone may switch video streams “by detecting the direction of sound or lip movement of the person” through the device’s microphones or camera. This would create a “multiplexed video stream” using video from both cameras. This mode could conceivably be used by a reporter who wanted to provide video footage of a scene whenever they were not talking.

Another embodiment creates a multiplexed video stream that is synchronized to whoever is speaking. This mode could conceivably be used for conducting interviews since the video would automatically stream from the camera that was facing whoever was talking.

Apple also proposes a “’picture-in-picture’ feature” that could be activated by the user. This would allow a user to set a primary video stream that would cover the entire display, while the secondary video stream would be displayed “in a thumb-nail sized area at a corner of the display screen.” Apple also notes that all of these methods could be used for “a live video call,” or simply be recorded and stored for later usage.

Apple’s iPhones are already widely used by the news media. Earlier this year the Chicago Sun-Times newspaper even eliminated its entire staff of photographers and instructed its reporters to use iPhones to supply the photo content for its publication. However, if Apple’s new “Automatic Video Stream Selection” patent is implemented, it might also make the iPhone a capable camera for reporters.

Don’t Miss:Better AppleCare Is Coming Soon to This Major Market.