What Will This Big Earnings Week Bring?

In the chart of the Dow Jones Industrial Average (NYSEARCA:DIA) below, we see that the index is still on a “sell” signal with a downside price objective of 13,750. Recent highs and long term resistance rest at 15, 700 while support is found at the 14,600-14,700 level. Both the SP500 (NYSEARCA:SPY) and Dow Jones Industrial Average (NYSEARCA:DIA) remain below long term channel resistance levels and in overbought territory. 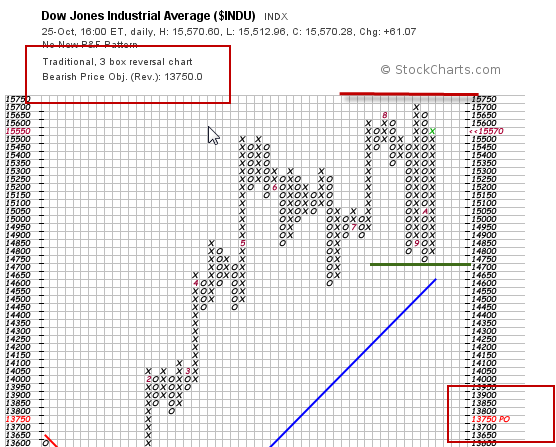 Other noteworthy factors to consider regarding future direction of the Dow Jones Industrial Average and other major U.S. stock indexes:

1. Record high margin debt. Margin debt has just recorded a new record high, more than $400 billion, which has helped power stocks higher in this recent rally. However, margin cuts both ways and if/when a decline starts, it will be exaggerated in speed and severity as margin positions are closed. Current conditions reflect those seen at the 200 and 2007 highs.

This week, the Dow Jones Industrial Average earnings parade continues with Merck (NYSE:MRK) reporting on Monday, Visa (NYSE:V) on Wednesday, Exxon (NYSE:XOM) on Thursday, and Chevron (NYSE:CVX) on Friday. Other major earnings reports will come from the SP500 with Apple (NASDAQ:AAPL) on Monday, LinkedIn (NYSE:LNKD) and Yelp (NYSE:YELP) on Tuesday, General Motors (NYSE:GM), Facebook (NASDAQ:FB), and Starbucks (NASDAQ:SBUX) on Wednesday.

So far, earnings have been relatively positive due mostly to cost cutting while revenue growth has had a more difficult time beating analysts’ estimates.

Other big news this week will come from the Federal Reserve which holds its monthly meeting from which most people expect no change to the Fed’s current quantitative easing program. Estimates for tapering have now been put off to as far out as next spring due to the recent government shutdown and the upcoming budget battle scheduled for later this year and January, 2014.

Major economic reports next week include:

Bottom line: Wednesday’s Federal Reserve statement will be sliced and diced for clues to the future of quantitative easing which has been a key market driver for many months. Earnings and economic reports will cast light on the state of the “real” economy. Technical factors show markets to be overstretched and a divergence between the Dow and the SP500 as the SP500 sets new records and the Dow doesn’t. Wall Street Sector Selector remains in “yellow flag” status, expecting choppy conditions ahead.