Why Nadella’s Microsoft Is Worth More Than Ballmer’s 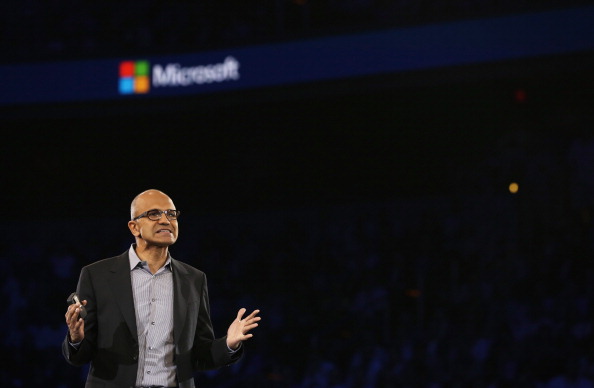 In the race to the top, technology giant Microsoft is one step closer to its arch rival, Apple. Following an increase in market valuation, Microsoft leap-frogged Exxon Mobil to become the world’s second-most valuable company with an overall value of $410 billion. This development makes Microsoft and Apple the world’s two most valuable companies, but the folks in Redmond, Washington, still have a long way to go before they can catch up with their Palo Alto, California, rivals, as Apple still holds onto a valuation of more than $660 billion.

For comparison, Geekwire reports that other big companies in the tech sphere lag well behind the big two, with Google being valued at $374 billion, Facebook at $208 billion, and Amazon at $149 billion.

This is welcome news to Microsoft shareholders, who have been growing increasingly antsy, as the company has had a series of setbacks in recent years. But what it does show is that new CEO Satya Nadella’s plan to trim the fat and get the company back onto the fast-track toward remaining relevant appears to be working.

Since Nadella took over the helm from former CEO Steve Ballmer, the company has downsized its workforce considerably and reorganized to prioritize its resources into developing products and services that are much more profitable. While Microsoft has seemingly fallen behind the eyes of consumers when it comes to staying on top of tech trends, Nadella’s approach has turned Microsoft into a slimmer, more nimble company.

“Microsoft has made a strategic change,” Daniel Ives, a tech analyst at FBR Capital Markets, told The Economic Times. While the company still has some big-time changes to make as personal computer use — which is Microsoft’s bread and butter — continues to dip, Ives says that Microsoft is still faring better than many other large tech companies on the market. “Microsoft has done the best job of trying to skate where the puck is going,” he said.

And the puck seems to be going to the mobile sphere. Microsoft built its empire with its famous Windows software platform for PCs throughout the ’80s, ’90s, and 2000s, but seemingly hit a snag entering the new millennium. As companies like Apple were able to jump on and help propel the switch to mobile computing, Microsoft seemed complacent to continue to push its way ahead by using its old tactics.

Not only that, but as new innovations hit the market, the company also seemed perfectly okay with coming on board after the fact with products that simply didn’t live up to what competitors had put out. Think Bing versus Google or the Windows Phone versus the iPhone, for example.

But the market is changing, and it’s changing fast. At the beginning of the year, Bloomberg reported that personal computer shipments fell 10% during 2013, shipping around 316 million units. That drop accounted for the worst decline in PC market history, as more and more people have opted to adopt tablet and mobile phones in lieu of a traditional desktop or laptop.

As bad as 2013 was, many analysts are expecting 2014’s and 2015’s numbers to be just as ugly,  if not worse. “We don’t think it’s quite the bottom yet,” Loren Loverde, an analyst at International Data Corporation, told Bloomberg. Loverde added that IDC was predicting another 3.8% decline in PC sales this year, and that the trend would likely continue in 2015.

What has helped Microsoft a bit this year is that those predictions by IDC and others haven’t necessarily held true so far. Gartner says that tablet sales increased by a whopping 68% in 2013, but there are signs that consumers may be wavering. Reuters reports that revised estimates predict the same segment will only rise 11% this year, hurting companies like Apple, which has put a lot of stake in the tablet business. The iPhone is a tremendous earning machine for Apple, as well, but as the market becomes more saturated with cheaper smartphones, those revenues are threatened.

But that doesn’t mean that tablet and mobile computing is going away, and that’s the issue Microsoft needs to deal with.

The problem from Microsoft’s perspective? It’s competitors — mainly Apple — have already established themselves as powerful incumbents in the tablet and mobile markets. Microsoft has released the Windows Phone and Surface tablets to try and compete but haven’t even come close. And it’s not just Microsoft — Amazon also took a swing at the mobile phone market and whiffed monstrously with the Fire Phone.

What that may mean is that the issue doesn’t necessarily resolve with Microsoft or Amazon, and could simply be a testament to how deeply entrenched consumers are with their iPhones or Samsung devices. But if Microsoft plans to increasingly push for that top spot on the list of the world’s most valuable companies — and it has a very long way to go if it does — then those are the areas where the firm will need to compete. Microsoft is already evolving to be more efficient and profitable, and it maintains a presence where Apple does not, insofar as that it has one of the top two or three video game consoles in the world, and one of the top search engines, as well.

Though Nadella has undoubtedly already made a mark on Microsoft, what’s yet to be seen is what kind of company he will be helming in the future. Will Microsoft return to its roots, focusing on software and productivity? Or will it continue to venture out into other arenas, producing hardware, mobile phones, and video games? If Nadella’s behavior thus far is any indicator, it looks like the company may be reversing course and focusing on what made it such a huge success in the first place.

Closing the nearly $250 billion gap to catch up to Apple in the rankings may seem like a pipe dream at this juncture, but Nadella seems to have the company on the right track.