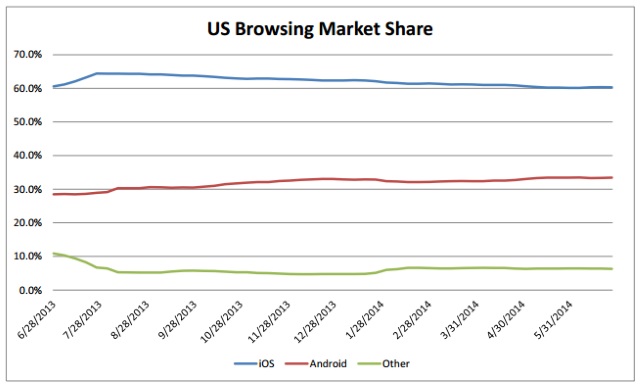 Apple’s (NASDAQ:AAPL) iOS is holding its ground in the mobile web browsing traffic market in the U.S. despite increased competition from Google’s (NASDAQ:GOOG) (NASDAQ:GOOGL) Android, concluded Piper Jaffray analyst Gene Munster in a recent note to investors. Munster based his conclusion on data provided by Quantcast that compared the mobile traffic market shares held by iOS, Android and “Other” mobile operating systems. As noted by Piper Jaffray, Quantcast looked at 1 billion monthly mobile page views to determine its percentages. This quantity of page views represents approximately 1.5 percent of the total viewing market in the U.S.

According to Quantcast’s data, Apple’s iOS accounted for 60.3 percent of the mobile web browsing traffic in the U.S. last month, only a slight decrease from the 60.5 percent share that it held in June of 2013. Although the year-over-year growth of iOS mobile traffic remained essentially flat, the traffic share for Apple’s mobile operating system also went as high as 64.4 percent during the twelve-month period.

In the note to investors, Munster identified three primary reasons why Apple’s iOS generates more mobile traffic than Android. First, Munster pointed out that Apple’s iOS had more than a 50 percent share at both AT&T (NYSE:T) and Verizon (NYSE:VZ) during the June quarter. Second, like many other industry analysts, Munster believes that iOS users tend to be more engaged with their smartphones on a daily basis than Android users.

Finally, Munster noted that iOS likely gets a significant mobile operating system market share boost from Apple’s longstanding dominance of the tablet market. According to Munster, tablets likely generate more traffic than smartphones, presumably because of the larger format. According to market research firm IDC, Apple’s iPad accounted for a 32.5 percent share of the worldwide tablet market in the first-quarter of 2014.

Although Piper Jaffray’s Quantcast data showed that Apple’s iOS has a stable lead in the mobile web browsing traffic market in the U.S., other market research firm’s studies indicate that Android may soon overtake iOS in worldwide mobile web traffic share. According to data from Net Applications, Android’s share of the global web traffic market has been steadily climbing over the past several months. While Apple’s iOS still led with a 45.6 percent share last month, Android is not far behind with a 43.75 percent share. Also, unlike in the U.S. market, Android’s rise appears to be coming at the expense of iOS. As seen in the chart above, the worldwide market share for iOS has slipped from 53.3 percent in March to 45.6 percent last month.

However, Apple’s upcoming product releases may help the Cupertino-based company regain its lost worldwide web traffic market share. Apple is widely expected to debut two larger iPhone 6 models with screen sizes of 4.7 inches and 5.5 inches in September. The screen size increases will likely drive a spike in upgrades as well as attract more first-time iPhone buyers who may have been holding out for a device with a larger screen. This may prove especially true in Greater China, where phablet-sized mobile devices are more popular. Finally, Apple’s rumored iWatch is expected to arrive in October. The introduction of an entirely new iOS-based product will also help boost Apple’s overall share of the mobile web traffic market.