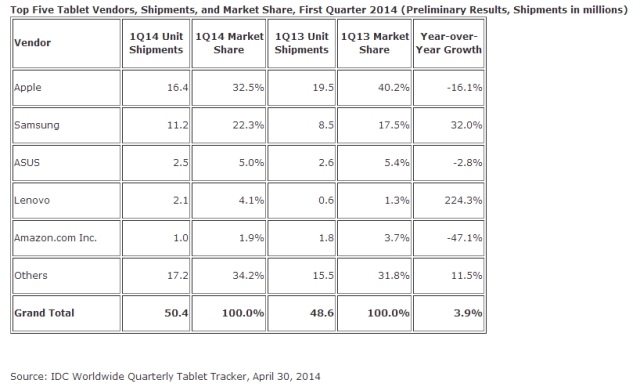 Apple (NASDAQ:AAPL) has maintained its position as the No. 1 tablet vendor in the world despite an overall slowdown in the market. According to the latest data from IDC’s Worldwide Quarterly Tablet Tracker, shipments of tablets and “2-in-1” tablet devices declined 35.7 percent from the previous high-volume holiday quarter and increased by only 3.9 percent from the year-ago quarter.

Worldwide tablet shipments were lower than expected in the first quarter of 2014 at 50.4 million units as the market showed further signs of becoming more mature, reports IDC. “The rise of large-screen phones and consumers who are holding on to their existing tablets for ever longer periods of time were both contributing factors to a weaker-than-anticipated quarter for tablets and 2-in-1s,” stated IDC Program Vice President of Devices and Displays Tom Mainelli. “In addition, commercial growth has not been robust enough to offset the slowing of consumer shipments.”

Although Apple wasn’t immune to the overall market slowdown, the iPad maker still maintained its lead in the global tablet market during the first quarter with 16.4 million units shipped for a 32.5 percent share. However, this was a year-over-year decline of 16.1 percent for Apple. Last year, the Cupertino-based company had a 40.2 percent share with 19.5 million units shipped.

Meanwhile, Samsung (SSNLF.PK) solidified its second-place ranking in the overall market and led the Android tablet makers by growing its market share to 22.3 percent in the first quarter of this year, from 17.5 percent in the year-ago quarter. The Korea-based company shipped 11.2 million units in the most recent March quarter compared to 8.5 million units in last year’s first quarter.

Android-based tablet makers Asus, Lenovo, and Amazon (NASDAQ:AMZN) followed Samsung in third, fourth, and fifth place, respectively. However, each of those tablet makers was far behind Apple and Samsung with a 5 percent or less share of the total market. On the other hand, “others” — a category that covers various white box tablet makers — accounted for a 34.2 percent share of the market.

“With roughly two-thirds share, Android continues to dominate the market,” noted IDC research analyst Jitesh Ubrani. “Although its share of the market remains small, Windows devices continue to gain traction thanks to sleeper hits like the Asus T100, whose low cost and 2-in-1 form factor appeal to those looking for something that’s ‘good enough.’”

Although Apple’s market share contracted last quarter compared to the previous year, Apple CEO Tim Cook offered several reasons for the iPad shipment decline in the company’s last quarterly earnings call. He pointed out that “in the March quarter last year, we significantly increased iPad channel inventory, while this year we significantly reduced it.” Cook also noted that “we ended the December quarter this year near supply demand balance,” while last year’s December quarter ended with a “substantial backlog” that was shipped in the March quarter.