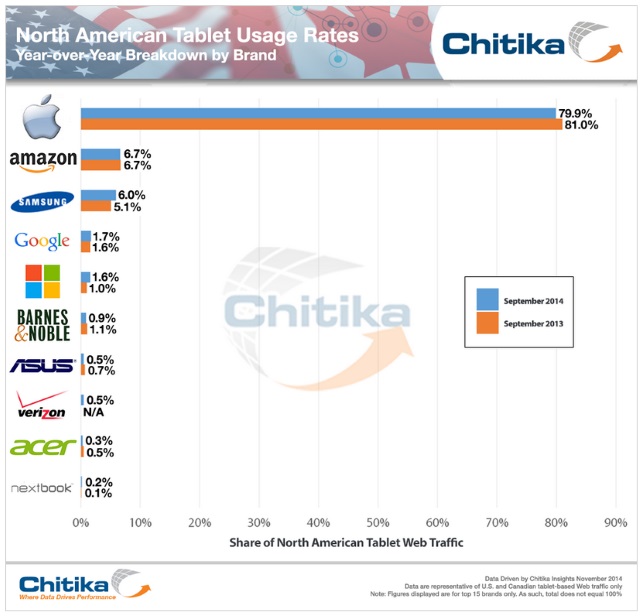 While much has been made about Apple’s shrinking share of the worldwide tablet market, there is at least one metric in which the iPad is in no danger of losing its crown. According to data compiled by online ad network Chitika, Apple still dominates tablet usage rates in North America. As seen in the chart above, Apple’s iPad accounted for a 79.9% share of all tablet-based Web traffic in the U.S. and Canada during September 2014. Chitika derived its tablet usage statistics by sampling “tens of millions of U.S. and Canadian tablet-based online ad impressions running through the Chitika Ad Network.”

While Apple’s share is down slightly from the 81% market share that the company held one year ago, it is still far ahead of any of its rivals, including Amazon, Samsung, Google, and others. Apple also saw the biggest quarter-over-quarter usage share increase by any tablet maker after growing 1.9 percentage points. Chitika noted that this increase was likely due to the discounted iPad models that several major retailers were offering in the run-up to Apple’s release of the iPad Air 2 and iPad mini 3 in October.

Amazon maintained its second-place position with a 6.7% share of tablet-based Web traffic. Amazon recently usurped Apple as the tablet maker with the highest level of customer satisfaction for the first time, according to the latest U.S. Tablet Satisfaction Study from J.D. Power and Associates. Nevertheless, the Kindle Fire tablet maker couldn’t come close to the amount of traffic that iPad users generated.

Third-ranked Samsung showed the biggest year-over-year growth of any tablet maker after increasing its share of Web traffic from 5.1% to 6.0%. However, as noted by Chitika, the Korea-based company also released six new tablet models during the first seven months of 2014, which likely helped boost its usage numbers. 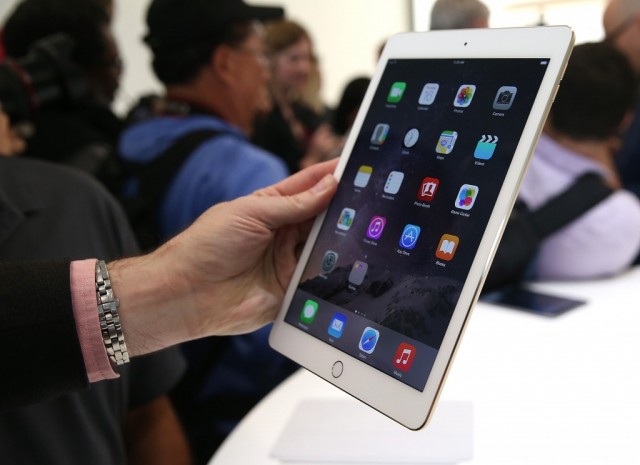 Fourth-ranked Google saw a slight year-over-year increase from 1.6% to 1.7%, while fifth-ranked Microsoft exhibited the second-highest gain after increasing from a 1.0% share last year to a 1.6% share this year. It should be noted that Chitika’s data on Microsoft does not include Surface Pro models, which the network considers to be “more laptop-like.” Barnes & Noble, Asus, Verizon, Acer, and Nextbook each accounted for a less than a 1.0% share of North American tablet-based Web traffic.

Apple’s nearly 80% iPad usage rates in North America stands in stark contrast to the company’s 22.8% share of worldwide tablet market sales, as documented in IDC’s 2014 third quarter tablet market report. Apple already derives a higher profit margin from its hardware than any other mobile device company and the high rate of Web traffic generated by iPads suggests that its user base spends more money on services as well.

Apple CEO Tim Cook highlighted the discrepancy between the numbers of tablets sold by other companies compared to the amount of Web traffic generated by their users during Apple’s fiscal 2013 third quarter earnings call. “[I]f there are lots of other tablets selling I don’t know what they are being used for because that’s a pretty, the basic function is a Web browser,” stated Cook, according to Chitika.

So, despite the iPad’s shrinking worldwide market share, it doesn’t appear that usage of Apple’s tablets has declined much in the North American market. This is good news for Apple, since the North American market is one of the few regions where the tablet market is still growing, according to IDC. “Not only is the US market one of the largest for tablets, but third quarter results also indicate that this is where the growth is,” noted IDC Research Director for Tablets Jean Philippe Bouchard. Apple may even regain the 80%-plus usage rates that it has achieved in previous quarters during the upcoming holiday shopping season when more of its new iPad Air 2 and iPad mini 3 models will be sold.