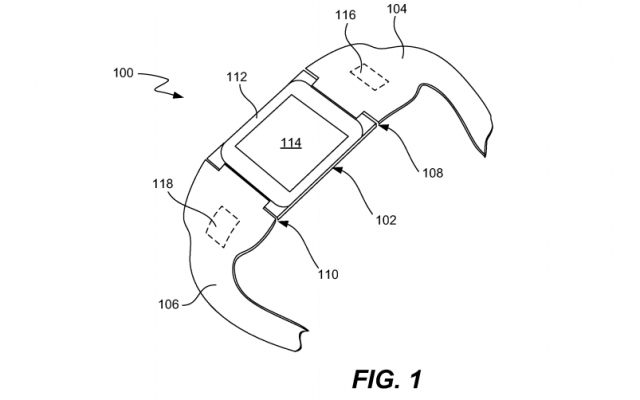 A new patent won by Apple (NASDAQ:AAPL) reveals that the company has actually been developing a smartwatch similar to the much-rumored and eagerly anticipated iWatch. Apple’s patent number 8,787,006, for a “Wrist-worn electronic device and methods therefor,” describes a device that’s consistent with rumors about the iWatch, a hypothetical smartwatch that’s captured the interest of consumers even without any official acknowledgment of its development by Apple.

The patent describes several versions, or “embodiments,” of Apple’s watch design. While each iteration able to interface with an iOS device or a computer, some enable the removable coupling of a portable media player to the watch’s wristband, creating a convertible smartwatch — consisting of a smart wristband and a removable electronic device. In some iterations, the device is integrated into the wristband. The strap itself features circuitry as well. The abstract describes the range of the options patented, and reads: 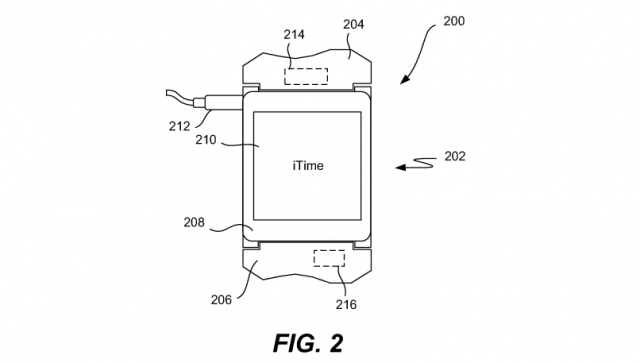 The watch in Apple’s patent, dubbed ‘iTime’ in one illustration, appears in a variety of different iterations throughout the patent. The patent looks at a variety of different embodiments of the smartwatch, but one of particular interest is a version that doesn’t require the addition of another electronic device. That’s the version most closely related to what the iWatch is expected to look like. However, other models feature a receptacle for a “highly portable media player,” and the patent cites the iPod Nano as a compatible device that users would be able to attach and remove from the watch’s wristband.

More generally, the patent notes that a compatible “mobile electronic device can include a display and be independently useable apart from the electronic wristband.” Another version of the watch would include an integrated central section, with its own touchscreen display, control circuitry, and a battery. The straps themselves integrate “additional circuitry or devices,” which could include a number of components, including an accelerometer, an antenna, a GPS receiver, a “wireless communication transceiver,” or a haptic device.

Though the smartwatch is capable of both wired and wireless communication among devices, Apple describes the connection established between the watch and a phone or computer as a piconet — a network created using wireless Bluetooth connectivity. The patent notes that a computer or smartphone can send alerts and notifications to be displayed on the smartwatch. “In general, the notification request can be considered a push notification from another electronic device to the electronic wristband.”

Apps could also send notifications to the smartwatch, but beyond that, the watch enables users to control their smartphone from the smartwatch. Even from a notification, they would be able to control apps on the source device. For example, they could control a media player on their computer, or interact with an app that runs on their iPhone. That ability to interface with a smartphone is what pushes the patent from wristband to smartwatch territory, and the smartwatch would even be able to notify users if a connected electronic device goes out of range, which could alert users if they’ve forgotten a device, or if a device has been stolen.

Apple notes that the smartwatch can also be “associated with” a number of different iterations of the smartwatch include sensors, “such as accelerometers, location (e.g., GPS), proximity, biometric, force and/or the like that extend the capabilities of the electronic wristband or its associated portable electronic device.” The smartwatch could also use one or more sensors, such as an accelerometer or gyroscope, to detect users’ arm and wrist movements, which could be use to respond to notifications via gesture control. The patent notes that a horizontal movement could tell the device to decline an incoming call, while a vertical movement could indicate to accept the call.

The company is rumored to be developing a smartwatch, unofficially dubbed the iWatch, to be launched this fall. Its functionality is widely expected to be very similar to what Apple outlines in the patent, and several recent hires have been interpreted as evidence that the device is in development. Apple’s smartwatch would likely feature a focus on health and fitness, assisted by an assortment of sensors, such as those detailed in the patent.