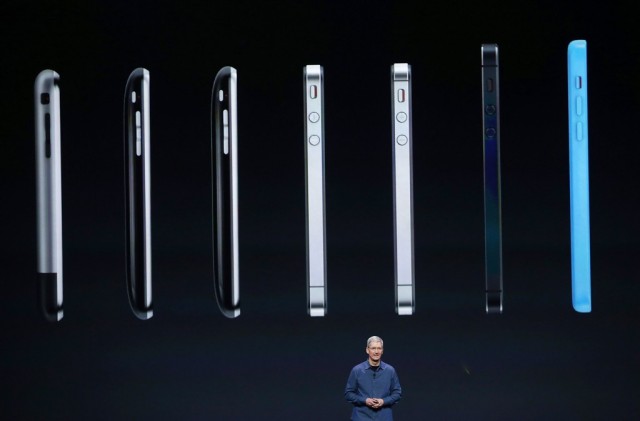 The latest Apple earnings illustrate the tremendous power of the iPhone — and the extent to which Apple relies on it for growth. Apple’s first quarter was its biggest ever by far, with the company reporting a record $74.6 billion in quarterly revenue, which represents 30% growth since last year. As Quartz notes, its $18 billion in profit also set a new record, and its massive 74.5 million iPhone shipments beat last year’s record by nearly 50%. Per its guidance for its second quarter, Apple expects growth to continue, and projects revenue between $52 billion and $55 billion.

IPhone sales reached $51.2 billion to account for 69% of Apple’s overall revenue last quarter, also setting a new record. Quartz points out that the iPhone’s year-over-year revenue growth — measured in dollars — was more than the company’s overall growth. Stronger than ever demand for the iPhone also saw the company handling one of its most impressive logistical challenges yet: Manufacturing and selling nearly 75 million iPhones in a single quarter. The company says that 74.5 million units sold equates to 34,000 handsets sold every hour, 24 hours a day, every day of the quarter.

For years, Apple rivals like Samsung have sold large-screen smartphones, but Apple resisted what it considered a trend toward supersized phones. But last year, Apple conceded and announced that its two new iPhones would feature significantly larger screens. As Apple’s first quarter earnings show, that bet paid off. IPhone shipments skyrocketed to 46% higher than the previous record (which was set a year ago), and iPhone revenue represented a larger percentage of Apple’s total sales than ever before.

As Apple Insider reports, the iPhone 6 was the most popular model in Apple’s first quarter, though some geographies skewed higher on their preference toward the iPhone 6 Plus than others. The iPhone 6 and iPhone 6 Plus attracted more customers who are new to the iPhone than any other product launch, and they also had the highest rate of customers switching from Android than any of the previous three years.

The average selling price of an iPhone also increased, reaching $687, up $50 from from the same quarter a year ago, enabling Apple to reach a gross margin of 39.9%. On its earnings call with investors, Apple attributed the increase to the popularity of the iPhone 6 Plus — which costs $100 more than the iPhone 6 — and the “increased value customers saw in our higher storage capacity offerings.”

The popularity of the iPhone in China rose dramatically, with research firm Canalys reporting that Apple was the number one smartphone maker in China last quarter. As The New York Times reports, Apple saw $16.1 billion in revenue from the “greater China” region, which includes mainland China, Hong Kong, and Taiwan. That figure represents growth of 70% over the same period a year ago, and Apple Chief Executive Tim Cook characterized Chinese consumers’ excitement over the iPhone 6 and iPhone 6 Plus as “phenomenal.”

Apple’s 2012 launch of the iPhone 5 saw Product Marketing Chief Phil Schiller making a big deal of thumb control, jabbing at rival phones that were growing continually larger, as noted by Quartz. Apple followed up the iPhone 5 with the iPhone 5s in 2013, keeping the same four-inch screen. But by 2014, it became obvious that consumers liked bigger phones, and some might have been avoiding the iPhone because it wasn’t available in a larger size. So with the iPhone 6 and iPhone 6 Plus, Apple ate its words and went big. While some purists call for a smaller iPhone again, millions love the iPhone 6 and even-bigger iPhone 6 Plus.

Revenue from Mac and the App Store also played a part in Apple’s record earnings. Mac sales reached 5.5 million, up from 4.8 million in the same quarter last year. Apple’s “Services” revenue category, which includes the App Store, iTunes Store, and other digital storefronts, reached $4.8 billion. But iPad sales continued to fall, with Apple reporting sales of 21.4 million iPads in the quarter, down 18% from the 26 million sold during the same quarter a year ago. But the company relies increasingly on the iPhone — which accounted for 69% of the company’s revenue last quarter but only 56% in the same quarter the year before.

A note from Wells Fargo analyst Maynard Um characterized Apple’s first quarter as “a story of strong strategy and execution in its most important segment — iPhones.” Toni Sacconaghi, a financial analyst for Sanford C. Bernstein & Company, told The New York Times, “A bet on Apple is increasingly a bet on the iPhone. The good news is, iPhones are great. The bad news is, right now that’s driving over 100 percent of the revenue growth of the company.” Many investors say that they would like to see Apple’s revenue become more diversified, which raises some expectations for Apple’s upcoming entry into the smartwatch market with the Apple Watch. The company announced that the Apple Watch will be released in April. Cook, noting that he wears his everyday, quipped, “I can’t live without it.”

It remains to be seen if the company will be saying the same of its first wearable when it finally hits the market. What is clear is that the iPhone is unequivocally Apple’s can’t-live-without-it product — and it’s hard to imagine that changing anytime soon.