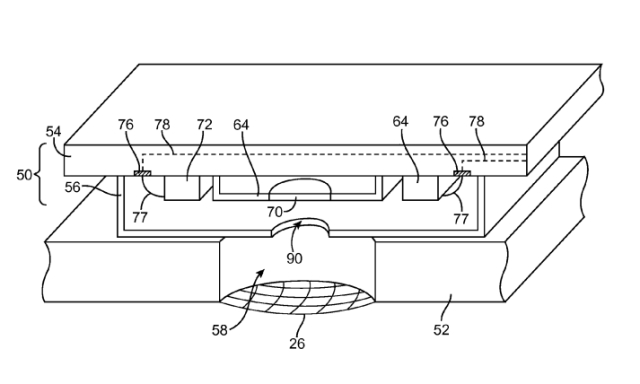 Current Apple (NASDAQ:AAPL) devices already feature several types of sophisticated sensors, including accelerometers and a gyroscopes that can detect motion and orientation, respectively. However, future Apple devices may include even more sensors. Two published Apple patents uncovered by Apple Insider suggest that the Cupertino-based company is considering outfitting iPhones, iPads, and “wrist-watch devices” with various types of environmental sensors, including a temperature sensor, a pressure sensor, and a humidity sensor.

In a patent titled “Electronic Devices With Environmental Sensors,” Apple noted that “Electronic devices such as cellular telephones, portable computers, and tablet computers are sometimes provided with audio components such as microphones and speakers. Audio components are often mounted behind open ports in the device that allow sound to pass through the ports to or from the audio components.”

For example, if an iPhone sensed that the surrounding temperature could cause it to overheat it would activate a “safe mode” that would minimize its chances of sustaining permanent damage. This would be similar to how some electronic devices use an accelerometer to determine if a device is in free fall. If a device senses it is falling, it will secure the hard disk to prevent data loss.

Another patent titled, “Electronic Devices With Temperature Sensors” outlined a similar invention, but focused exclusively on the construction of the temperature sensor. Since electronic devices tend to generate their own heat, Apple proposed placing the temperature sensor on a “button member” that is thermally isolated from the rest of the device through the use of insulating materials. The temperature sensor could also be incorporated into an external switch or button, in order to allow better interaction with the surrounding environment. Although it is not known if Apple will incorporate these environmental sensors into the next generation of devices, it should be noted that the iWatch is rumored to include several medical sensor technologies that would allow users to monitor various biometric data related to health, exercise, and diet.