Apple’s Sales are Nothing Special, But Look at Those Profit Margins!

As Microsoft (NASDAQ:MSFT) struggles with shrinking sales of Windows PCs, Apple (NASDAQ:AAPL) is holding onto a large share of the industry’s profits, despite selling only a small fraction of the world’s PCs, according to data published by Asymco.

In fact, Apple sells just 5 percent of the world’s PCs, but makes 45 percent of the industry’s profits. With low sales, Apple is being propped up by high margins, which most PC vendors just don’t have.

“The real problem for the PC vendors is not that they have such low margins — theyve had low margins for decades. Its that the volumes which made up for low margins are disappearing,” said analyst Horace Dediu.

Asymco compiled various data to give a broad but all-encompassing view of the PC market. Here’s some of what they found: 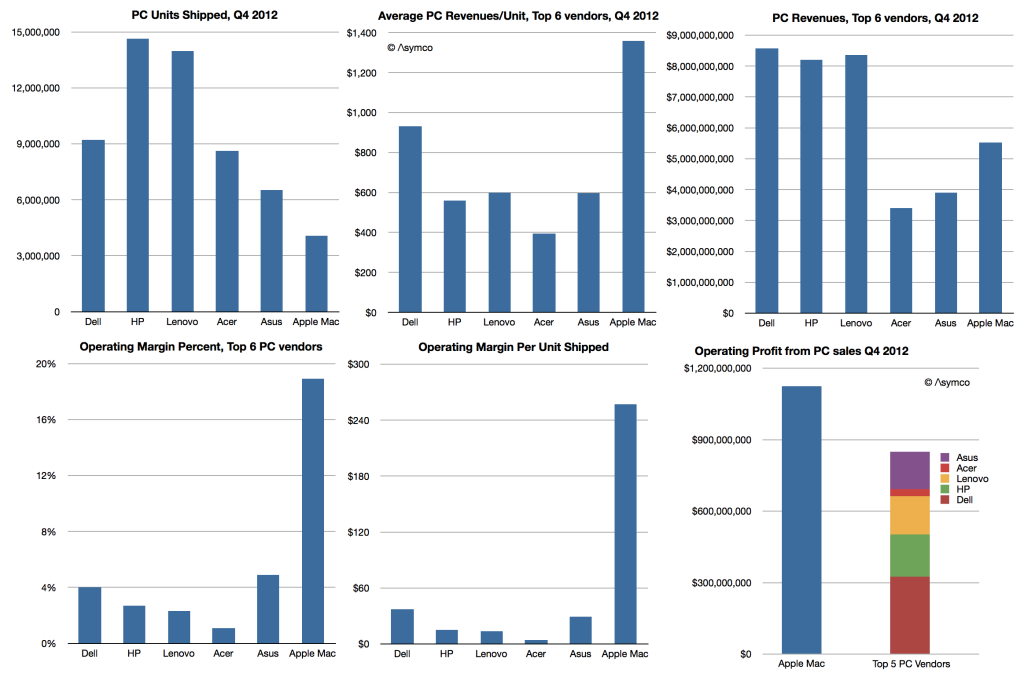 Apple isn’t shipping nearly the volumes of PC competitors like Dell (NASDAQ:DELL) and Hewlett-Packard (NYSE:HPQ), as demonstrated by the first chart, but it certainly demands the highest revenue per unit, according to the second. While Dell, HP, and Lenovo still bring in higher revenues than Apple, a lot of that goes to covering their operating and production costs. Conversely, Apple is pocketing nearly 20 percent of revenues as pure, delicious profit. Dell, HP, Lenovo, Acer, and Asus all bring in only a fraction of Apple’s margins. And when all tallied, Apple alone rakes in more total profit than the top 5 PC vendors combined — or at least it did in the fourth quarter of 2012, which Asymco says “perhaps” demonstrated the largest quarterly decline in PC shipments in the last two decades.

Here’s a breakdown of how Asymco’s Dedieu came up with the numbers:

The only inference I made was with respect to Apples margins for the Mac. These are based on deriving a gross margin of 26% and adding an estimate of the SG&A and R&D overhead of 7.1% of sales, a figure which applies to the entire company. This yield an operating margin of 18.9%.

If this estimate is considered then the operating profits from PC operations imply that Apple generates more profit than all the top 5 PC vendors combined.

Assuming further that other vendors have the same profitability ratio as the top 5 combined yields a figure of 45% profit capture of PC market for Apple. This is not as good as its performance in the phone market, where Apple has about 72%, but its not bad.

Because Dedieu only inferred Apple’s margins on the Mac, there’s definitely some room for error in his calculations, but it seems fair to say that Apple is still walloping competitors when it comes to profit, even if the Windows PC is still the computer of choice for the broad population.

It might be too late for PCs — even Apple has contributed to the cannibalization of computer sales with its tablets and smartphones — but it does seem companies like Dell and HP could take a cue from Apple and focus on more high-end products. There are plenty of customers willing to shell out extra cash for quality, or at least perceived quality — Apple has demonstrated that. And with the proliferation of smartphones and tablets, there’s less need for low-end computers anyway. The strongest part of the PC market going forward will likely be the most powerful laptops and desktops, those that can perform tasks that simply can’t be done on small mobile devices.

Microsoft will also have to play a leading role in such developments, though. Apple certainly has an advantage in that it designs its own software and hardware, which means they fit together seamlessly. Microsoft, too, could take its cue from Apple here, and work more closely with PC makers to develop a high-end product with great appeal — something that’s not only powerful, but that connotes the same sort of elite status that Apple has used to distinguish itself in its comeback years.