Are Messaging Apps to Blame for a Dip in Social Network Use? 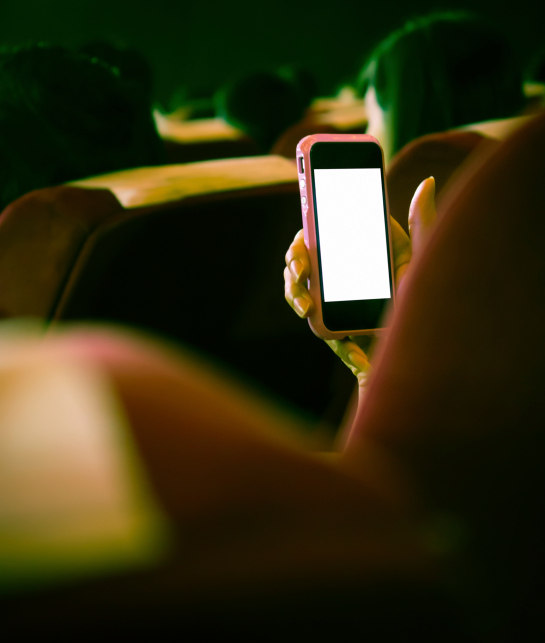 As TechCrunch noted, research conducted by U.K. telecoms regulator Ofcom found that the use of social networking websites dipped in the U.S., U.K., China, and Japan between September 2013 and October 2014. The report notes that while social networking and reading news online are the two most popular Internet activities on a smartphone in all countries studied except Australia — where mobile banking is more popular than reading news online — the number of people accessing social networking sites in the U.K. each week fell to 56% of users in October 2014 from 65% in September 2013.

While the number of weekly social network users increased year-on-year in many countries, in the U.K., U.S., China, and Japan, the proportion fell. In September 2013, 65% of U.K. Internet respondents reported using social networks at least once a week; that figure fell to 56% in October 2014. In the U.S., the figure fell from 56% to 54%. In China, the proportion fell from 62% to 57% over the same period, and in Japan, it dropped three percentage points to 42%. 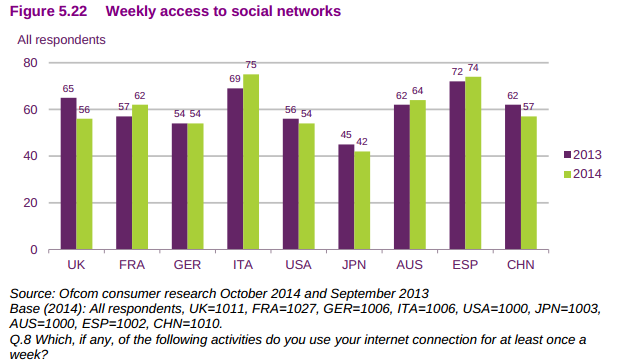 The social networking activities that users engage in are constantly diversifying

Ofcom says that a possible reason for the decline in social networking usage in the U.S., U.K., Japan, and China may be the growing popularity of social media services that don’t involve traditional networks of connections. TechCrunch notes that online video sites and instant messaging are two popular online activities that are thought to be detracting from social networks’ hold over users’ online social lives, and cannibalizing social network usage.

Video is an especially important part of the strategy for services all along the spectrum of social networking. So far, the traditional powerhouse in online video is still dominant. Ofcom reports that while a quarter of mobile Internet users used Facebook to access video content in the U.S., U.K., Spain, and Italy, 36% of U.S. mobile internet users visited YouTube at least once in August 2014.

But as Business Insider reported recently, online video is an area where Facebook is determined to increase its share. Facebook has added an autoplay feature for videos in the News Feed, increased mention of the importance of video in its calls with investors, and is reportedly trying to get YouTube stars to create content especially for its platform. Video is an area of focus for Twitter, as well, as it plans to add the ability to record and share native videos sometime in 2015.

YouTube has traditionally enjoyed a monopoly over online video, and Facebook wants in on the opportunity to reach a demographic that increasingly is turning away from Facebook: teenagers. And even YouTube isn’t immune to declines in usage. Facebook’s growth in desktop video views has already taken a small chunk out of YouTube’s audience as YouTube’s unique video viewers on desktop decline. YouTube showed a 9% decrease in viewers year-over-year, falling to 150 million unique viewers in September.  The decline is attributed in part to a shift to mobile and in part to broader industry trends diversifying where users get their content.

What constitutes a social network?

Similarly, users’ idea of social networking services — which Ofcom defines as “A website that allows users to join communities and interact with friends or to others that share common interests” — is expanding beyond the boundaries of traditional social networking services. That fact is further emphasized by Facebook’s acquisition of messaging app WhatsApp earlier this year, and by the popularity of alternate social platforms like Snapchat or Instagram, which Facebook also owns.

Facebook, in its constant effort to experiment with ways to expand and diversify its reach through a variety of social experiences, recently released an app called Rooms, which enables users to create discussion boards on any topic and invite others to join, either via a private or public invitation. Rooms enables users to use different usernames from room to room and define the rules and tone of the rooms they create. The app is reminiscent of the early days of the Internet, recreating the unlinked array of chat rooms and discussion boards for the Instagram generation.

A Business Insider article over the summer referred to messaging apps as “the growth story of the decade in mobile.” Between March 2013 and March 2014, the messaging app market, as represented by the top seven players, expanded 148%, adding 900 million users.

While photo-sharing apps in general, and Instagram in particular, also saw impressive growth, messaging represents a much wider, more international category, with more companies building successful apps and finding ways to monetize them. From Facebook Messenger to Snapchat, WhatsApp, LINE, WeChat, Viber, and Tango, messaging apps continue to add users in record numbers, demonstrating that users are happy to build their own, private circles for their social interactions on mobile.

As Josh Miller, who leads the team that created Facebook’s Rooms, revealed at the time that the app was unveiled, the goal is to approach the app as a platform rather than a social network. A platform gives users the tools to create their own community and to choose their identities for themselves. He noted that with Rooms, “we didn’t build the social network, we built tools for you to make the social network that’s perfect for you.”

While not every new social networking app pushes that idea to the length that Rooms does, it’s clear from the diversity of the social experiences that users enjoy on their phones that they like to be able to define how they interact with others, choosing whether they converse privately or publicly; on a dedicated online video site or via the videos that show up in their feed on a social network; or via a large social network or through a messaging app that connects them with smaller, more immediate groups of people.

The increasing complexity of the social networking landscape makes it possible for users to try many modes of staying connected with each other, and traditional social networks face both more and wider competition than ever before.