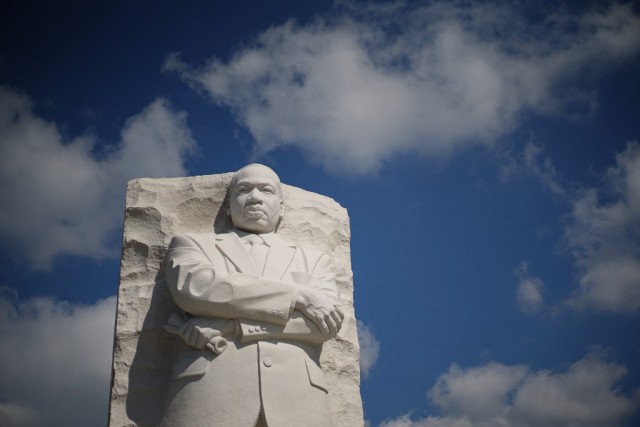 This Monday, January 19, most Americans will find some way to commemorate the life of slain civil rights activist Martin Luther King, Jr., either by participating in a memorial march, by performing volunteer work, or by simply pausing to reflect on King’s legacy. Of course, how you choose to commemorate Martin Luther King, Jr. Day may be at least partly determined by how your employer chooses to treat the holiday. A recent Bloomberg BNA Survey found that only 37% of American employers will provide a paid day off for Martin Luther King, Jr. Day. While this figure is slightly higher than what was found in last year’s survey (35%), it is a far lower percentage in comparison to most other federal holidays. “After three decades as a federal holiday, getting Dr. King’s birthday as a paid day off has increased slowly and steadily in prevalence but it remains the exception rather than the norm for the majority of American workers,” noted Bloomberg BNA’s Matt Sottong.

Rev. Jesse Jackson — a contemporary of King who has long pushed for more businesses to give workers the day off — has focused his attention on the tech industry this year. “This Monday only a handful of technology companies will close their doors and honor the King Holiday,” wrote Jackson in an open letter to the tech industry on the Rainbow PUSH Coalition website. “It does not make sense to tout diversity and inclusion, to promote change and innovation and not recognize the King Holiday.”

Facebook, Google, Twitter, and Yahoo are among the handful of tech companies that are closed this Monday, while Apple and Microsoft are two major tech companies that will remain open, according to USA Today. Apple’s decision to remain open is especially surprising, considering that Apple CEO Tim Cook has often expressed his admiration for the civil rights leader. 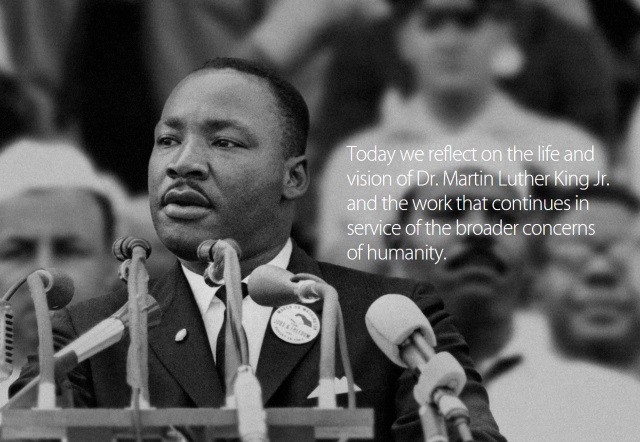 In 2013, at an awards ceremony honoring Cook, the Apple CEO noted that he has three photos in his office — two of Robert Kennedy and one of Martin Luther King Jr. Last year, in a Bloomberg Businessweek op-ed piece in which Cook publicly announced that he was gay, he cited a famous quote by King as one of the inspirations behind his decision to come out. Apple has also featured the civil rights leader in its “Think Different” advertising campaign. More recently, the company prominently displayed an image of King on its homepage to mark the MLK holiday.

Jackson’s push for more tech companies to give employees the Martin Luther King, Jr. Day holiday off follows a Rainbow PUSH Coalition campaign last year that urged Apple, Twitter, Facebook, Hewlett Packard, Google, and other Silicon Valley companies to improve the diversity of its workforce. Apple, Facebook, Twitter, and several other tech companies had no African Americans on their senior executive teams, per Rainbow PUSH. Similarly, in a report titled “Minority Inclusion in Debt Capital Markets: A Ranking of Corporate Issuers,” the Rainbow PUSH Coalition noted that Google, Apple, HP, and Oracle were some of the lowest ranked tech companies when it came to using minority firms in its debt offerings.

Following pressure from the Rainbow PUSH Coalition, Apple, Facebook, Google and several other companies released diversity reports for the first time last year. The majority of most companies’ employees were white, including Apple at 55%, Facebook at 57%, and Google at 61%. All three of those companies’ workforces were also about 70% male. 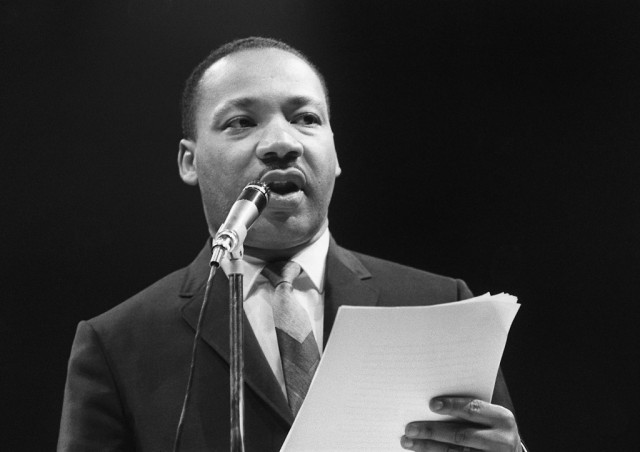 So are Apple and other tech companies cynically paying lip service to an iconic civil rights leader without backing it up with real actions? While there’s no doubt that Apple and most other tech companies have a long ways to go in achieving a more diverse workforce, making the Martin Luther King, Jr. Day holiday a mandatory paid day off may not necessarily be the best way to implement change.

Apple CEO Tim Cook has already noted he is “not satisfied with the numbers” in the Apple’s diversity report and wrote that the company is “committed to being as innovative in advancing diversity as we are in developing our products.” Although the upper echelons of Apple’s leadership may still lack diversity, the company has made improvements over the past several years with the hiring of former Environmental Protection Agency (EPA) chief Lisa Jackson in 2013 and the promotion of Denise Young Smith to VP of worldwide human resources in 2014. Last year, Apple also revised its “Nominating and Corporate Governance Committee Charter” to include a commitment to seek out “highly qualified women and individuals from minority groups to include in the pool from which Board nominees are chosen.”

So should tech companies make a paid Martin Luther King, Jr. Day holiday part of the industry’s overall efforts to improve diversity? In the case of Apple, a company that has actively promoted itself with King’s image, it does seem odd to keep its doors open during the holiday that bears the civil rights activist’s name. On the other hand, Apple and Microsoft – two companies that don’t shut down for the holiday – both promote King’s legacy in other ways. According to USA Today, Microsoft features a program that encourages its employees to perform volunteer work, although it’s not clear what this program involves.

Similarly, according to an internal Apple email obtained by the San Jose Mercury News, Apple is actively encouraging its employees to volunteer over the next several months. “As we reflect on the significance of Dr. King’s contributions, there is no greater way to celebrate his legacy than to serve the communities where we live and work,” wrote Apple’s Denise Young Smith. “In his honor, we are doubling our Matching Gifts program for the time you volunteer from January 19 until the end of the quarter on March 28. This means for every hour you serve, we’ll contribute $50 to the eligible organization you’ve chosen. I encourage all of you to work with your managers to find time in your busy schedules, either as a team or as individuals, to serve.”

Although it would be ideal if this charitable program was paired with a paid day off to perform volunteer work, it should be noted that Apple’s program may be more closely aligned with the true spirit of Martin Luther King, Jr. Day than a simple paid day off. As the MLK quote cited by Cook in his op-ed piece states, “Life’s most persistent and urgent question is, ‘What are you doing for others?’”