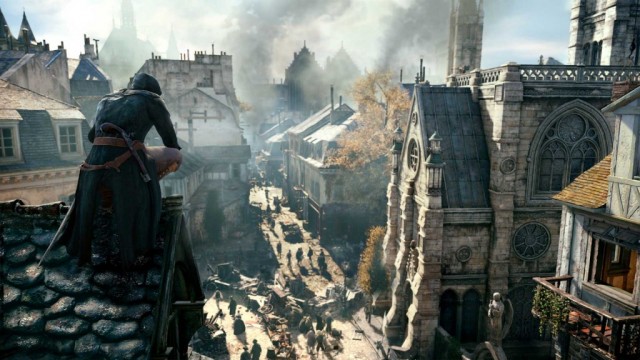 One of the coolest things about the Assassin’s Creed franchise — aside from sneaking through crowds to stab a dude in the back — is that it’s educational. Seriously. Each game in the series takes place in a real historical era and jibes with the actual events that occurred in that place and time. Invariably, you encounter the famous figures of the age, and often befriend them. Developer Ubisoft has just released a new trailer and blog post that unveil some of the famous people we can expect to bump into in Assassin’s Creed Unity.

The game takes place in 1789 Paris, on the eve of the French Revolution. History buffs will be unsurprised to learn that the game has you cross paths with characters like Maximilien de Robespierre and Napoleon Bonaparte. But that’s just for starters. Side missions will introduce players to some of the other people making names for themselves around that time, including Dr. Guillotin, who lent his name to the execution device, Madame Tussaud, of wax museum fame, and Antoine Lavoisier, the father of modern chemistry.

For all the action and violence that takes place in Assassin’s Creed, it’s clear that Ubisoft really does take the games’ educational value seriously. The game worlds the company creates are extraordinarily well researched. Famous landmarks are all intact and can be explored — for instance, the developer spent two years painstakingly recreating the Notre Dame cathedral for the game. Each time you discover a location, character, or artifact of historical significance, something that happens frequently in the games, you can tap a button to read a paragraph (or five) about it.

Ubisoft has published a series of blog posts addressing many aspects of the Unity, including the side missions, a brief history of the French Revolution, and why the characters speak with English accents when the game takes place in France. (On that last account, they determined French accents would be distracting for non-French players.)

Assassin’s Creed Rogue, for its part, will be set during the French and Indian War. Ubisoft has been quieter about which historical figures and locations will be present in the game, but if it’s like previous games in the series, you can expect to learn a lot about that particular conflict and time period as well. We’ll have more information about both games as their release dates approach.