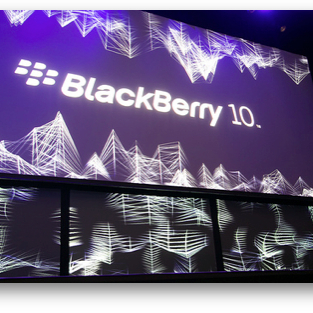 In what could be viewed as either a desperate BlackBerry (NASDAQ:BBRY) grasping at straws or a stroke of innovative genius, BlackBerry CEO Thorstein Heins has stated that the operating system running on the newly released Z10 BlackBerry smartphone is not just for its phones but may also eventually power tablets and full-blown PCs, according to ABC News. The way that this would work would be that the BlackBerry OS 10 powered smartphone would plug into a specially-made BlackBerry tablet or laptop that effectively only works as a screen and an input device. The smartphone would handle the data storage and processing, providing a unified experience to the user. All their apps and data would be the same, regardless of which “device” was used to access them.

BlackBerry’s only attempt so far at developing a tablet–the Playbook–ultimately fell flat on its face. Even after dropping its price from $499 to $149 for the base model, it has hardly made a dent in the increasingly important tablet market. However, the powerful, QNX Systems-developed operating system powering the Playbook is what is behind BlackBerry OS 10, which powers the new Z10 smartphone, according to Ars Technica.

BlackBerry purchased QNX Systems back in 2010 to help update its aging BlackBerry operating system for the new decade. While the Playbook might have been a bust, BlackBerry was able to use its development as a learning experience and a way to refine its new QNX-powered BlackBerry operating system. (QNX System’s operating systems power everything from the BlackBerry z10 to nuclear power plants, according to the company’s website). Heins stated, “To me, this is not just the next smartphone. This has the power of a laptop. This is not just a smartphone anymore. This is your personal computing power. Think about what you can do with that. How many personal computing devices do you carry? Why not unify this to one device that executes all your computing needs?” This is an interesting proposition but it does have one key flaw: the user still has to carry around the stripped-down tablet or laptop to use it, even if it is being powered by their smartphone. There are also other companies with similar products or plans to launch products already…

Ubuntu Linux operating system developer Canonical Ltd. has already stated plans to do exactly this, in an interview with the BBC in January. Also, Asus has also already developed its Padfone, which is part smartphone, part tablet and even part laptop with an add-on keyboard. The since the Ubuntu operating system is the most popular version of Linux on the market, Canonical’s  smartphone/tablet/laptop proposition would have access the full library of Linux and Unix compatible applications already available. And like Google’s Android OS, the Ubuntu OS is free. Asus’s offering also has a wide range of apps available to it already, since it is powered by Android OS. This has been BlackBerry’s real weakness since the iPhone was launched. There are just too few apps available for its devices and with each ‘different’ operating system it launches, the old apps are left behind and developers are left wondering if it is even worth the time, money and effort to develop for the BlackBerry platform.

Heins also said that, “We are talking about a mobile-computing experience that makes sure that for you as a user, you only have to carry one computing device. Then you get peripherals around it  that make your life much more easy than it is today carrying a tablet, carrying a smartphone, carrying a laptop, going to your office and having a desktop.” As for what hardware BlackBerry would actually make to enable this idea, Heins said, “There are various configurations you can think about. We are working on a few of those, so allow me to not comment on those in depth. But we will talk about a few of those concepts at BlackBerry World.”

So is BlackBerry’s unified smart device idea desperation or genius? Only time will tell, but it is fair to say that even if it successfully launches the idea to consumers, it will already have stiff competition. BlackBerry just cannot seem to get a break, even with ‘innovative’ ideas like this one. It has been playing catch-up in the smartphone market since the iPhone staggered it with a punch in 2007.