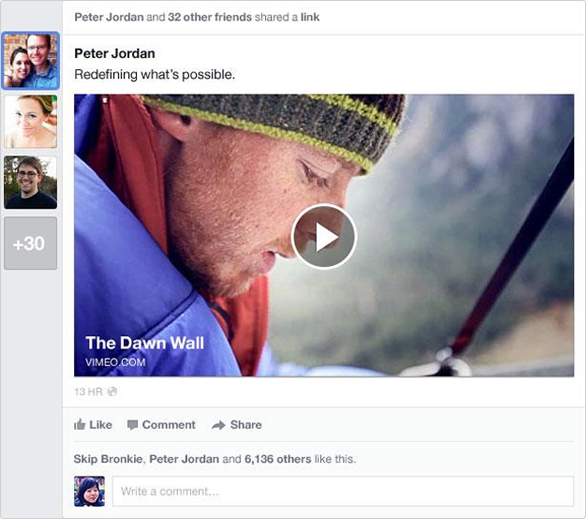 It’s been 10 years since the first video was uploaded to YouTube, and the platform has grown to become the world’s top platform for online video in the years since. But Advertising Age reports that Facebook “crashed the party” that YouTube threw to celebrate its 10th anniversary by announcing the launch of a branded-video program called Anthology, highlighting just how much potential Facebook has in video and raising the question of how much longer YouTube can stay on top.

Anthology will see publishers and video producers like Vice, Vox Media, Tastemade, and Funny or Die creating videos for advertisers. Creative Shop, Facebook’s in-house agency, will run Anthology videos as ads on the social network, bolstering Facebook’s position as it tries to supplant Facebook as the top destination for online video.

While advertisers can ultimately run their Anthology videos as sponsored content on publishers’ sites or as ads on sites like YouTube, Hulu, Yahoo, or even TV, the biggest benefit of working with Facebook will be the depth of data that Facebook has on the types of videos that users like to watch. Publishers and video producers that participate in the Anthology program will be able to use that data to inform the content that they create for advertisers.

The Next Web’s Owen Williams writes that it’s the first time that YouTube actually needs to worry about losing its place as the foremost platform for online video. Facebook video — which is young compared to YouTube, which launched in 2005 — now has 4 billion daily viewers, up from the 3 billion that Facebook announced in January and the 1 billion it had last September.

Facebook got serious about video in 2014, when it adjusted its algorithms to weight video more heavily. Facebook’s fast growth in video contrasts with YouTube’s more gradual ascent; YouTube reached 4 billion daily video views in 2012, eight months after it hit 3 billion and seven years after it first launched. (YouTube no longer reports its daily video views.)

“YouTube should be scared of Facebook,” Williams wrote on The Next Web, noting that Google may struggle to match Facebook’s “video powerhouse” because it hasn’t successfully built out a social graph like Facebook has.

In Williams’s assessment, it’s just a matter of time before the “YouTubers” who regularly upload videos their massive communities of fans will have similar counterparts on Facebook. When you add a video to a public post on Facebook, the News Feed algorithm will show it to significantly more people than it would a photo or a text-only update.

On Facebook, videos show up directly in users’ News Feeds, where they spend the most amount of time on the social network. While YouTube notifies your subscribers when you upload a new video, getting the word out to others is up to you.

By contrast, Facebook’s News Feed algorithm can drive huge amounts of traffic to a video. Williams points to a video shared by Vox on Facebook. Vox’s page has approximately 260,000 likes, but the video has received more than 1.1 million views since being shared on April 10. The same video shared on YouTube has only 89,000 views.

Of course, it’s unknown to content creators how long Facebook will stick with its current algorithm. It’s also possible that the huge amounts of traffic that the News Feed can drive to videos will dry up if the platform becomes saturated with video content.

And Facebook doesn’t yet have any way for content creators to monetize their videos, though early adopters will benefit when it does implement one.

But not everyone is convinced that Facebook will replace YouTube in the near future. Writing for The Wall Street Journal, Mike Shields reports that despite Facebook’s undeniable momentum in gaining video views, advertisers aren’t yet convinced that the platform is a viable alternative to TV.

While major ad buyers acknowledge that Facebook’s video figures are impressive, they note that its actual ad inventory pales in comparison to YouTube’s. YouTube features pre-roll ads — a form that Facebook has avoided — and has a more developed video ad business. Adam Shlachter, chief investment officer at Digitas, told the WSJ’s Shields: “The growth of video views on Facebook is staggering. But it’s still not 100% clear what the opportunities are to capitalize on that.”

Visible Measures looked at 82 Web video campaigns that were released in March and in aggregate reached 437.5 million people through a combination of paid advertising and organic sharing. More than half of these campaigns used Facebook, and among all of these campaigns, Facebook accounted for 35% of total viewership versus 65% for YouTube.

At the end of 2014, Visible Measures reported that Facebook’s share was in the single digits. Visible Measures Chief Executive Brian Shin said: “There is a huge opportunity for Facebook to grab video ad dollars because of its targeting. But we don’t see those dollars coming from YouTube.”