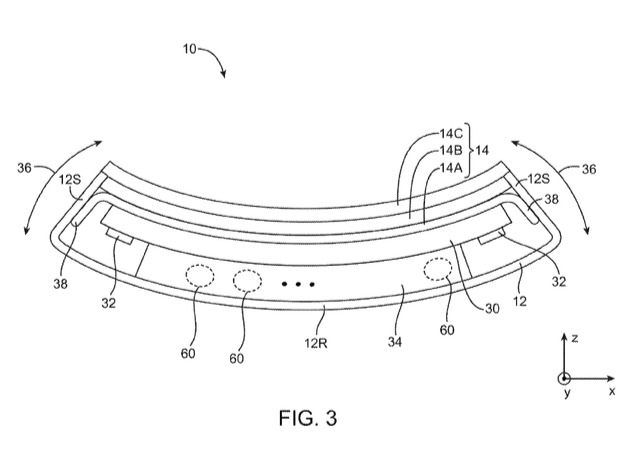 Apple has been granted a patent for a device, like an iPhone, made almost exclusively from flexible components, which would enable the phone to be bent, folded, and use their flexibility as a method of user input. The patent could be the key not to just to putting “Bendgate” to rest — and doing a flexible iPhone right — but to improving wearables like the eagerly-anticipated Apple Watch.

Patent no. 8,929,085 for “Flexible electronic devices” was first spotted by Apple Insider, which notes that unlike other patents for flexible devices, Apple’s newly awarded patent cites malleable external components, such as the chassis and cover glass, in addition to flexible internal components, like the battery, circuit board, display, and other electrical components. As the patent puts it, in an abstract that almost certainly sets the record for instances of the word “flexible”:

The patent describes how a flexible device could be fitted with a flexible OLED display, use a battery that is either completely flexible or formed from rigid pieces and flexible joints, and have “flex sensing components” that would sense deformations of the device and interpret them as commands to change what the device is doing or to turn the device on or off. In some embodiments, the device could even eschew a cover glass altogether, relying instead on support structures on the underside of the bendable display.

A flexible housing unit would contain the internal components of the device, such as circuit boards, sensors, motors, and speakers. The patent suggests that instead of milled aluminum, Apple could mold the chassis from plastic, thin glass, fiber composites, or another combination of materials that would be capable of withstanding the continual flexing of a bendable device. The housing could consist of a soft plastic or silicone that would fill the volume around batteries and circuit, or could take a more traditional approach by augmenting rigid fasteners with “engagement features” to attach flexible components.

A completely flexible device would enable a variety of novel user interface and input concepts. Users could squeeze, bend, or twist the device to activate sensors that then invoke system commands. Users could twist a device to answer a call, start an app, or change the volume of audio or video media. Additionally, a flexible device could also be foldable for storage, and could be configured to sense that a device has been folded, and cause it to enter standby mode.

Apple Insider notes that the patent mentions that the device could have bi-stable flex regions, which would give it two or more standard configurations. Internal components could have both concave and convex positions that, when activated, would enable the device to bend in either direction. That could enable Apple to build larger devices, which could be folded for storage.

But even more interesting than the technology’s potential applications for big devices are its implications for small ones. While the patent notes that flexible devices could be more resistant to the damage usually sustained during drops, thanks to their ability to bend while absorbing the impact, the flexibility of components or of an entire device could also be a key feature for wearables like the Apple Watch, which already has a flexible display — though it’s fixed in place to avoid the damage that would otherwise occur with frequent flexing.

Flexible batteries, in particular, are an area of interest for the growing number of companies building wearable devices. The tech community has noted that flexible batteries could enable better, more comfortable designs for wearables. As battery technology improves, batteries will get smaller, becoming less of a barrier for innovative wearable designs and making better battery life possible. Those advances combined with a stable, flexible battery could lead to big improvements for future models of the Apple Watch.