A banner for Pandora Media Inc., the online-radio company, hangs in front of the New York Stock Exchange walk on its first day of trading as a public company on June 15, 2011 in New York City. (Photo by Spencer Platt/Getty Images)

Collectively, Pandora and YouTube are responsible for 65% of the streaming music market. Pandora is the leader in this category, but YouTube is not far behind. But, YouTube, which is part of Google, still makes more money than Pandora.

And, Pandora is taking steps to catch up. The online music service recently announced a new feature that enables artists to record custom messages aimed at fans. Called the Artist Messaging service, the new feature enables artists to record custom messages for fans. The messages span a wide variety of formats ranging from announcement of new albums to crowdfunding campaigns.(Popular rocker Lenny Kravitz has already recorded a test message for the service). The program is in pilot mode and, according to Chris Phillips, chief product officer at Pandora, will be expanded based on results of the pilot program.

At the Code/Media conference recently, Tim Westergren, chief executive officer at the service, said that the initiative was part of a larger roadmap for artists to “claim their identity” on the service. It started with the introduction of artist analytics last year. The analytics service also known as AMP, enables artists to view play data about their individual songs and albums. For example, artists can view a breakdown of individual locations where their songs are being played.

Phillips told The Cheat Sheet that the company has not devised a formal process for the new feature, but Pandora does provide artists with guidelines to “help artists with what to say.” This includes previous examples of successful messages. “It’s a collaboration informed by data about what works but leans heavily on passion and voice of artists,” he said.

The service’s latest foray into artist marketing is surprising given that it markets itself as an online radio service. In an age of fragmented platforms and reduced revenues, having a medium with the reach and power of radio is a benefit in and of itself. But, Phillips told me that the company does not have plans to monetize the service. “We primarily monetize based on selling advertising,” he said.

In doing so, the service will have to compete with multiple platforms, such as iTunes Radio, YouTube, and Spotify. Together, these platforms offer a comprehensive digital ecosystem for artists to market themselves. For example, pop sensation Beyoncé used a combination of Twitter, iTunes, and YouTube to release and market her previous album.

Even though the album was released around midnight, it still clocked the highest number of downloads in iTunes history. Simultaenously, videos for each track were released on YouTube. More recently, she racked up a number of views for her latest single “7/11″ using the service. The Internet’s largest video service –YouTube — has been aggressively courting artists with flattering numbers about its payouts.

Two reasons for entering the ecosystem

Pandora’s entry into this ecosystem has been instigated by two factors. The first one is a clamor for revenues from Wall Street investors. Since being listed on the stock exchange, the company has turned in a profit only in a single quarter. Royalty revenues have been a major lag on its revenues accounting for almost 43% of total expenses in the last quarter. The service’s share of national ad spending (which carries larger margins but is more competitive) by large brands has been declining for some time. Simultaneously, its share of local spending (where margins are low but competition is relatively less) by local businesses has increased. 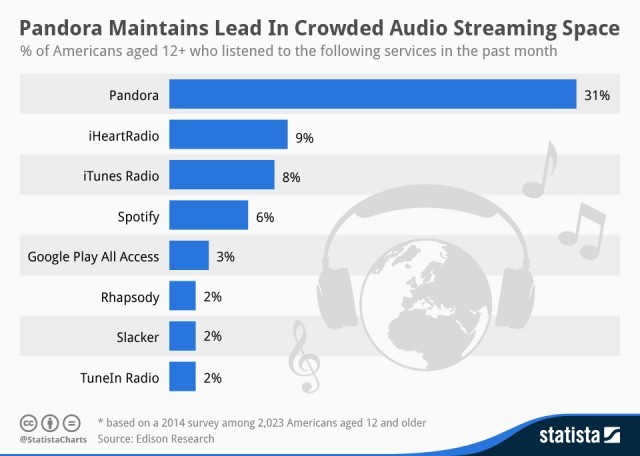 The radio ad market is worth $17 billion. Local ads account for $14 billion of the total market. Currently, this market is dominated by terrestrial radio. But, that is expected to change in the future with analysts predicting that online radio will grow at a faster pace as compared to terrestrial radio. Considering that the online radio space is getting increasingly crowded, a significant share can fend off competition and translate into major revenues for the online music service.

The second reason is related to the first. The company has filed a court case that seeks to reduce its statutory rates (money paid by the company to artists per-play) by almost 20%. Other streaming services, such as iTunes and Spotify, work with music labels to determine these rates. However, Pandora negotiates these rates with SoundExchange, a non-profit for performance rights. SoundExchange is pushing for a 79% increase in the same rates, citing the fragmented nature of today’s music ecosystem.

Pandora’s foray into artist development will give it additional leverage with artists and enable them to target individual markets in a systematic manner. The company can cite its initiatives to further make the case for value. It also makes the platform more attractive to artists. “The new service can show the value of Pandora for promotion of music, the artist, and other opportunities that benefit the artist, record labels, and larger music maker ecosystems,” said Phillips.