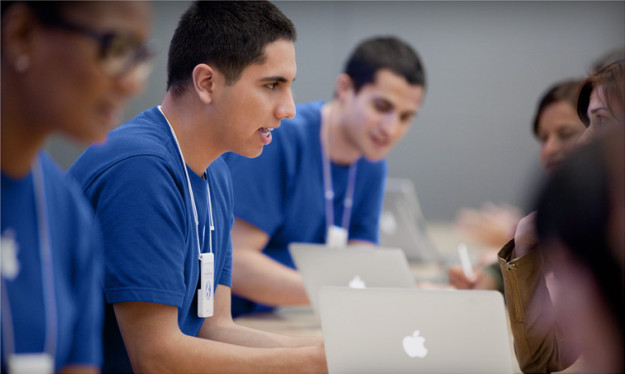 Apple’s (NASDAQ:AAPL) retail stores are beginning to replace the current mobile point-of-sale system that uses the iPod touch with a new system that uses the iPhone 5S, according to unnamed sources cited by 9to5Mac. The current iPod touch “EasyPay” system has been in use since 2009, according to 9to5Mac. Besides offering the obvious advantage of allowing Apple Store employees to make or receive phone calls without a separate device, the iPhone 5S-based POS system also includes several additional new features.

As noted by Forbes, the upgraded system includes a new “shell” or “sled” that attaches to the iPhone 5S. Made by electronic payment transaction technology provider VeriFone (NYSE:PAY), the new shell features the capability to read chip-and-pin cards, the new standard in credit card security. The chip-and-pin POS system requires users to enter their personal identification number (PIN) after swiping their card. The new iPhone 5S VeriFone shell includes a number keypad on the back of the device for the improved credit card security feature.

However, perhaps one of the most interesting aspects of the new iPhone 5S-based POS system is what it may be capable of doing in the future. As noted by Forbes, the new VeriFone shell includes an area where a near field communications (NFC) receiver could be installed. Rumors of an upcoming Apple mobile payments service have been gaining steam ever since The Wall Street Journal reported that the Cupertino-based company was developing the system earlier this year and many industry watchers believe that an NFC chip that allows users to make wireless retail transactions will be a key element of this service.

Apple already holds at least one patent for an NFC-based retail shopping system and some analysts have predicted that the iPhone 6 will include an NFC chip. On the other hand, the Touch ID fingerprint scanner that is found on the iPhone 5S could provide another method for Apple to quickly and securely complete transactions in the Apple Store. It should be noted that Apple already has a significant number of credit card-linked accounts through iTunes. As noted by CEO Tim Cook during the company’s recent earnings call, “We now have an almost 800 million iTunes accounts, most of these with credit cards.”

While it remains to be seen if the iPhone 5S-based POS system is Apple’s first step in implementing an NFC-enabled mobile payments system, the new system still offers customers and Apple Store employees plenty of security and usability improvements.