Does Apple’s Spending Confirm the iWatch? 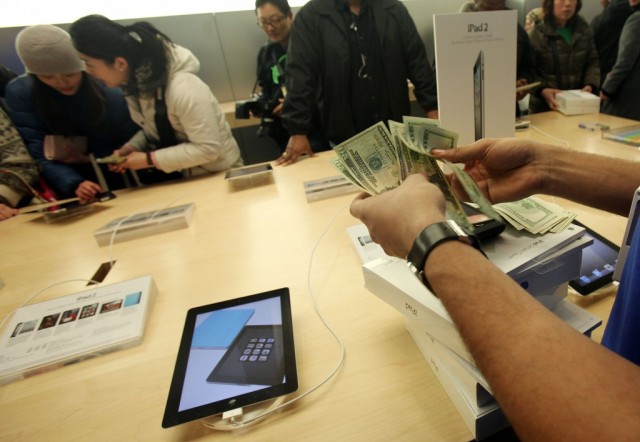 Apple has made no secret of the fact that it is working on some important new products that will be unveiled this year. During the company’s fiscal 2013 fourth-quarter earnings call almost a year ago, CEO Tim Cook repeated his promise of “exciting new products … across 2014,” reports Seeking Alpha. More recently, at Re/Code’s inaugural Code Conference in May of this year, SVP of Internet software and services Eddy Cue noted that, “Later this year … we’ve got the best product pipeline that I’ve seen at Apple in my twenty-five years at Apple.”

Of course, with Apple being the highly secretive company that it is, those general statements were the extent of the new product details that the company executives were willing to share. However, countless purported component and information leaks from the company’s supply chain have provided Apple watchers with plenty of rumors to mull in the meantime. While unverified information about unreleased Apple products should always be taken with a grain of salt, most industry analysts believe that the company is planning on releasing two new iPhone models with larger screen sizes of 4.7 inches and 5.5 inches in September. Other details about the devices are fuzzier. The so-called “iPhone 6” may or may not have a sapphire-covered screen, a Near Field Communication (NFC) chip, or a 128GB capacity option.

There is even less information and analyst consensus on Apple’s long-rumored entry into the wearable tech market. The so-called “iWatch” is rumored to include health-monitoring and fitness-tracking sensors that will presumably work in conjunction with the health data storage platform called HealthKit and the associated Health app. However, besides a few isolated rumors about the difficulties that Apple has supposedly encountered with the production of the device, information on Apple’s iWatch has been scarce and there have been no component leaks. In a note to investors obtained by 9to5Mac, KGI Securities analyst Ming-Chi Kuo even suggested that the highly anticipated product might be pushed into next year.

However, at least one analyst believes that there is already plenty of evidence available that suggests Apple’s iWatch will be arriving this year. In a recent note to investors obtained by AppleInsider, RBC Capital Markets analyst Amit Daryanani pointed out that Apple spent a record $15.4 billion on manufacturing and component costs in the June quarter, an 18.5 percent increase over the same quarter last year. This suggests that “AAPL is potentially not just gearing up for iPhone 6 ramp but could be securing capacity for a new product (iWatch?),” wrote Daryanani via Barron’s. According to AppleInsider, Daryanani also highlighted a “material spike” in Apple’s spending on tooling costs. Both expenditures suggest that Apple is preparing for a massive roll out for both its iPhone 6 models as well as the iWatch.

Besides providing more evidence for an upcoming iWatch launch, Apple’s increased manufacturing and component spending also bolsters previous reports that suggested the Cupertino-based company was preparing for the largest iPhone launch in its history. According to insider sources cited by The Wall Street Journal in July, Apple told its suppliers to manufacture between 70 million and 80 million units combined of the larger screen models before the end of the year. In comparison, Apple ordered 50 million to 60 million units combined of the iPhone 5C and iPhone 5S last year.

Multiple media outlets have reported a rumor that Apple’s iPhone 6 models will be unveiled at a media event scheduled for September 9. Other rumors have suggested that the iWatch will be unveiled at an event in October. However, as previously noted, some analysts have also predicted that the iWatch will not go on sale until next year due to production difficulties. Either way, it appears that Apple customers and investors are excited about the company’s upcoming products. Last week, Apple shares closed above $100 for the first time since the company implemented a seven-for-one stock split, and on Monday the stock achieved a new all time high of $102.17 in early morning trading.