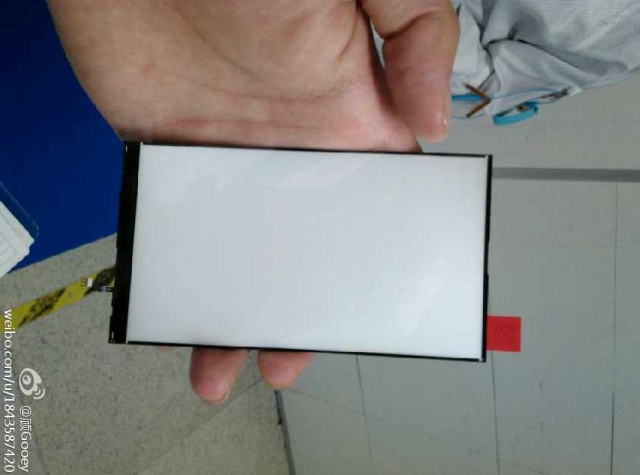 The latest purported leak from Apple’s (NASDAQ:AAPL) supply chain appears to offer the best evidence yet for a large-screen iPhone 6 device. While most of the previous leaks have involved computer renderings or aluminum molds for manufacturing iPhone 6 cases, the latest leaked images appear to show a genuine Apple iPhone 6 component.

Like many previous leaks, these images first appeared on Weibo, China’s popular microblogging website. Although it is impossible to derive precise measurements from the photos, the anonymous poster claims that the images show an LED backlight for a 4.7-inch iPhone 6 LCD display. As noted by Steve Hemmerstoffer from the French tech website Nowhereelse.fr, the part appears to be genuine based on its similarity to the backlight panel used in the iPhone 5S. Like the backlight panel used in the last generation iPhone, the flex cable is mounted on the bottom of the component. Although the flex cable is slightly shorter, the similarity in design suggests that the part was produced for an Apple product.

Besides the close up image of the backlight panel, the leaker also posted an image that shows the individual components used to make the backlight panel, as well as an image that shows a stack of fully assembled panels. As noted by Apple Insider, this is only the second major production part leak that has emerged from the Cupertino-based company’s supply chain this year, following the release of images last month that purported to show a front panel assembly for the 4.7-inch iPhone 6. It should be noted that Apple’s suppliers seem to have a tighter control on leaks this year, since by this time last year there had already been several significant component leaks for the iPhone 5C and iPhone 5S.

Besides providing further evidence that the iPhone 6 will be available in a 4.7-inch screen size, the leak also seems to indicate that the production of Apple’s next-generation iPhone has gotten off to an early start. This aligns with recent supply chain checks made by Morgan Stanley analyst Katy Huberty. “At this point, we see no major bottleneck in iPhone 6 production and an earlier production ramp could improve volumes early in the cycle,” wrote Huberty in a research note obtained by Business Insider. Huberty reported that sales for the iPhone 6 were expected to be 20 percent higher than last year’s iPhone 5S.

The backlight panel leak follows a recent report from Taiwan’s UDN news site that suggested that Samsung (SSNLF.PK) had been passed over as an iPhone 6 display supplier in favor of InnoLux. UDN’s sources also reported that LG Display (NYSE:LPL) and Japan Display were selected to be Apple’s other primary display suppliers.

Multiple media outlets have reported rumors that Apple’s iPhone 6 will be available in two larger screen sizes: a 4.7-inch model and a 5.5-inch model. Although most sources suggest that the smaller model will be released first, both devices are expected to be launched sometime this fall.