If you have ever felt that enormous tech companies like Facebook were taking over the world, your suspicions may too far off from the truth. In fact, it’s hard to think of another business that may have single-handedly transformed an entire industry in the way that Facebook has.

According to a study by Deloitte, Facebook has supplied the worldwide economy 4.5 million jobs and has generated $227 billion in economic activity. That’s against approximate costs of $8 billion, and essentially makes the social media network a bonafide economic powerhouse. The study itself — which was commissioned by Facebook — notes that the company stimulates the economy through three main channels: as a tool for marketing, as a platform for developers, and by generating demand for data and connectivity — or the need for mobile data and internet providers to create networks for individuals to use Facebook. 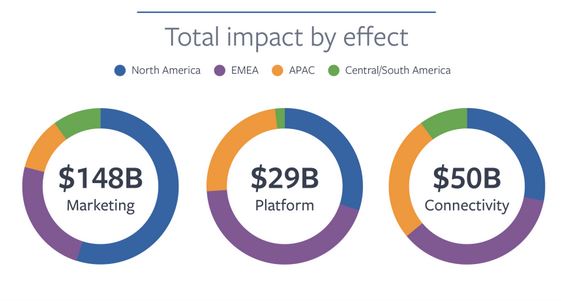 Facebook reportedly had the biggest economic impact in the United States, where the company generated $100 billion in activity while supporting more than 1 million jobs. In Europe, the totals were $68 billion and more than 1.1 million jobs. Facebook executives commented on how it’s not just Facebook’s ability to create jobs for engineers and developers, but for millions of workers that can use the social media network as an employment platform.

“Across the world there is a greater urgency about creating jobs,” Facebook’s Chief Operating Officer Sheryl Sandberg said. “The good news is that the tech industry is powering the economy and creating jobs within and beyond its own campuses. Every day, businesses of all sizes, sectors, and skill sets are using the Facebook platform to grow and expand.” 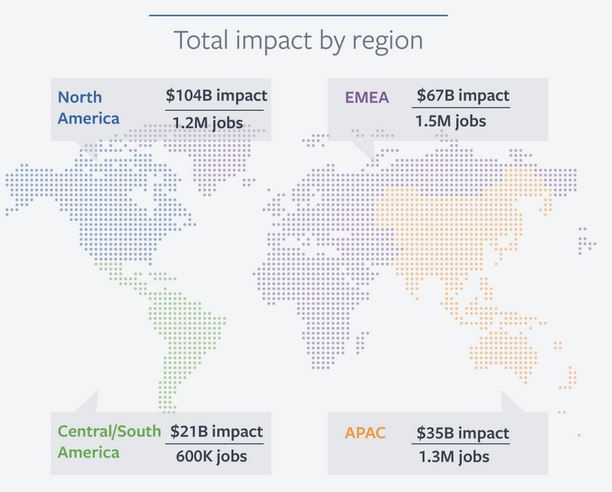 Because the Facebook study was commissioned by, well, Facebook, it is attracting some criticism. Despite the self-congratulatory stance that Facebook’s brass seems to be taking in the wake of Deloitte’s release, many economists aren’t buying in. The Wall Street Journal is reporting that some analysts are specifically pointing to things like the assumed value of a “like,” and the idea that Facebook is responsible for a huge percentage of mobile phone sales as suspect.

“The results are meaningless,” Stanford economist Roger Noll told The Wall Street Journal. “Facebook is an effect, not a cause, of the growth of Internet access and use.”

Another economist, Tyler Cowen at George Mason University, says that Facebook likely does have a big impact, but feels that the company is inflating its importance. “The value of smartphones is that they help you read Facebook — in addition to other benefits — not vice versa,” he said.

But these economists apparently have good reason to be suspect. For example, the WSJ says that Deloitte director Ana Aguilar, who was one of the people in charge of the study, used a European survey in which 16% of respondents said they could not live without social media to come to the conclusion that Facebook was a motivating factor behind mobile phone sales.

Even with those concerns in mind, it’s hard to argue that Facebook does have a tremendous economic impact, even if Deloitte’s research may or may not provide a truly accurate measurement. But let’s put things into perspective: Facebook has 1.35 billion monthly active users, and that doesn’t even count some markets that block the network, like China. Pew Research says that of all adults who use the internet, 71% of them use Facebook. Without a doubt, the company is as ingrained in the world’s culture and economy as anything. But there are some perfectly reasonable doubts being expressed as to the accuracy of Deloitte’s findings.

If we choose to take Deloitte’s study at face value, it’s easy to be impressed by the enormous reach Facebook has in today’s world. And there’s definitely reason to think that its impact will only be magnified in coming years, as the company diversifies with even more channels, like Instagram, while exploring new technologies, like virtual reality.

Facebook may or may not be driving 16% of smartphone sales, but the fact that a company that’s little more than a decade old has become an economic power in such a short amount of time is still an impressive accomplishment.