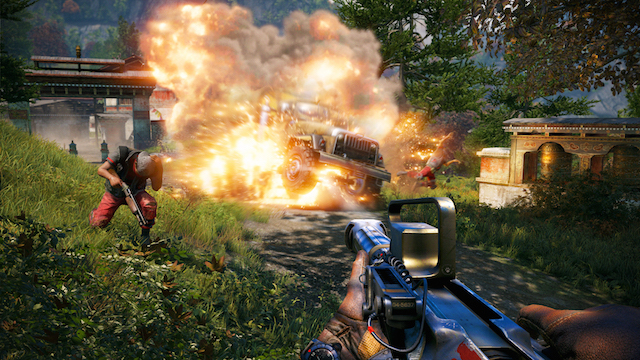 Far Cry 4 is almost here, which means gamers will have another enormous open world to explore, should they choose to play this game over its many, many AAA competitors this holiday season. The people at Ubisoft certainly hope you choose to play it, so they invited me for a hands-on preview of a near-final build of the game to give you an idea of what to expect when it comes out on November 18.

A PR rep put me in front of a TV and handed me a set of headphones and a PlayStation 4 controller. My preview started at some point near the beginning of the game, after the player has been set free to explore the game world.

First off, Far Cry 4 looks fantastic, filled with all the most vibrant colors that exist in nature, from blazing blue skies to lush forest greens, plus long draw distances and rarely noticeable graphical pop-ins. On PlayStation 4, at least, the game is a looker.

Far Cry 4 stars a man named Ajay who was born in the Himalayan country of Kyrat, but he grew up in the U.S. after moving with his mother when he was four. As the game begins, he arrives in Kyrat to scatter his mom’s ashes and discovers that a brutal tyrant named Pagan Min has taken over the country, destroying their religious artifacts and using their farms and industry to fund his army.

Ajay quickly gets caught up in the resistance, which is led by two people, Sabal and Amita, who often have polar opposite ideas about how to fight against Min’s forces. Sabal is a traditionalist who wants things to go back to the way they were, while Amita is more progressive, focusing on issues like education and women’s rights. As you play through the main story line, both Sabal and Amita try to sway you to do things their way.

To get a idea of what the missions are like, I went to an indicator on the map and watched a cutscene play out between Amita and Sabal, who were arguing about what to do next. Amita thought we should collect intel from a nearby base, while Sabal wanted to help defend a friendly outpost from an attack. The cutscene ended with Amita storming off and Sabal wandering out to sulk. As Ajay, I had two options: I could talk to Amita and choose to carry out her plan, or go with Sabal’s. 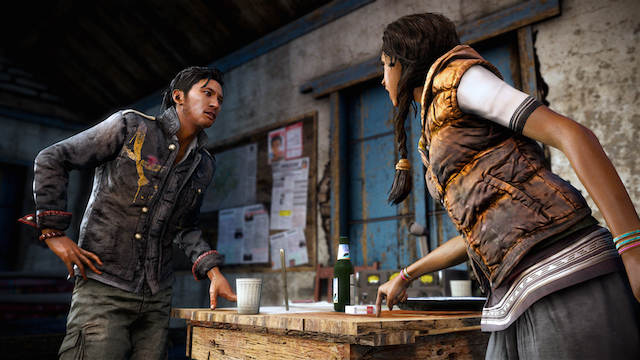 The developers I spoke to said your choices don’t have a major effect on the the story — you’re always trying to stick it to Pagan Min — but your choices may lead to a variation on a mission or a different goal. I went with Amita’s plan to collect intel from a nearby base.

When I got to the base, I found what looked like a massacre. The base had been destroyed, and everyone killed. Plus, a number of “hunter” enemies were prowling nearby. Hunters use bows and arrows, and are nearly impossible to track, because they can’t be tagged like other enemies once you see them. Hunters can also commune with animals, so they can sic wolves and birds on you from a distance. Far Cry 3 had nothing like these guys. So I combed through the camp at the areas highlighted on my map, looking for the intel, pausing only to fight the numerous hunters that snuck up on me.

Once I found the three pieces of intel, I reported back to Amita, who was very pleased I had stuck to her plan. I had gained some of her trust, but presumably gotten on Sabal’s bad side (sorry, bro).

After completing the mission, I wondered what good is an open world if you don’t take some time to explore? It was time to wander around aimlessly and see what kind of trouble I could get myself into.

I soon came upon a truck driven by a local member of the resistance. On the gun mounted in the back of the truck was an American Southerner named Hurk. Hurk, who also appeared in the “Monkey Business” downloadable content of Far Cry 3, provided a hilarious interaction by giving me a lesson on fist-bumping, and being confused about which side he was fighting for. Surely that’s not the last of him we’ll see in the game.

Down the road, I came upon a rickety little one-seated helicopter. If it worked, it would provide some serious freedom of movement, so I hopped on and took off. I flew up and up and looked all around, taking in the vast openness of the world below me. I felt like a kid who had discovered the keys to his parents’ car. 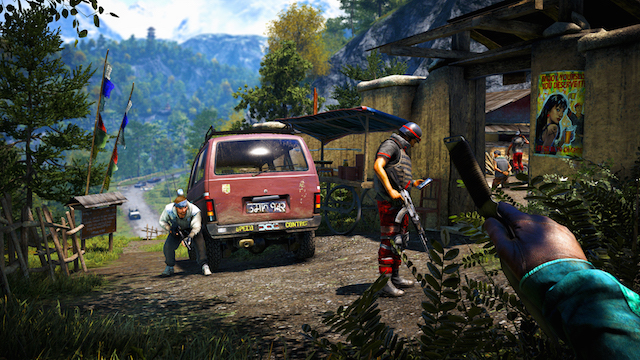 But I’m a stickler for in-game maps, and just like in Far Cry 3 (and Assassin’s Creed, for that matter), each section of the map is fogged over until you climb to the top of a tower in the area to clear it. The helicopter offered me freedom of exploration, but I wanted an un-fogged map.

So I landed and hopped in a car to drive toward a bell tower. On the way, I sped through the middle of an enemy outpost (indicated from afar by a pillar of smoke) and caught the attention of about a dozen bad guys. I was dead set on the bell tower, however, so I raced on through, losing my pursuers a mile or two down the road. The tower was guarded by a few drowsy enemies, but my shotgun took care of them without much of a fuss. When I reached the top of the tower, a satisfying chunk of the map cleared up.

Since my route back to Amita and Sabal’s village was through the outpost I’d encountered on the way to the bell tower, I knew what I had to do next. I drove toward the outpost, ready to sneak in and stealth-kill all of the pro-Min soldiers. But as I approached the outpost I saw a large gray shape lumbering on the side of the road. Ladies and gentlemen, I’d discovered an elephant.

I ditched the car and sidled up to the beast carefully, half sure I was about to be impaled by a tusk. My caution proved unnecessary, because I hopped on its back without incident. Which is to say, I was riding an elephant. Elephants control more or less like cars, with one exception: You can press the L3 stick to, I believe it said, “rampage.”

I piloted the beast down the road and into the outpost with all the confidence in the world. I’m proud to report that the hulking pachyderm did not let me down. A group of enemies greeted me on the road, so I mashed the L3 button, making the elephant charge toward the poor fools. As I approached, I pressed the attack button, making the elephant toss its massive head and send enemies flying like spilled popcorn. 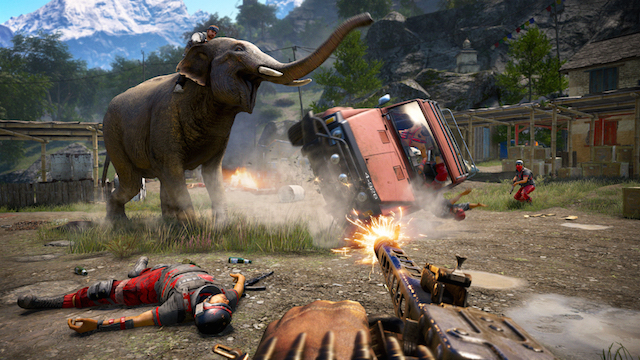 I was determined to stay on the elephant as long as possible, so I pulled a sharp left and lumbered toward an enemy who was shooting at me from behind a waist-high fence. It took a little doing, but I was able to maneuver the beast through some tight terrain, killing baddies as I went. (Shamefully, I did kill some enemies on the other side of the road by shooting them from my seat atop the beast).

Since I was more focused on elephant-based destruction than on freeing the outpost, the bad guys managed to press the alarm, which sent two more carloads of enemies into town. By the time they arrived, however, I was back on the road and I saw them coming. I charged directly at the cars, aiming for a head-on collision. To my pleasant surprise, elephants trump cars in Far Cry 4. The cars went flying, and soon I had extinguished all enemy life in the outpost, which led to a brief cutscene showing the flag of the resistance being raised on a pole out front.

My experience in Far Cry 4 didn’t present much of a challenge, but it took place early in the game, and I have lots of experience with the series. Assuming the difficulty ramps as you progress, Far Cry 4 promises to offer many of the same pleasures of its predecessor — and then some.

Overall, the game seems a lot like Far Cry 3, but with more of everything. More animals, more weapons, more vehicles, more side missions, more things to do in the open world. I had a lot of fun during my hour or so with the game, and I look forward to spending many more hours in Kyrat. The game will be released on November 18 for PlayStation 4, Xbox One, PlayStation 3, Xbox 360, and Windows.

Disclosure: Ubisoft paid for my trip to Montreal to preview the game.