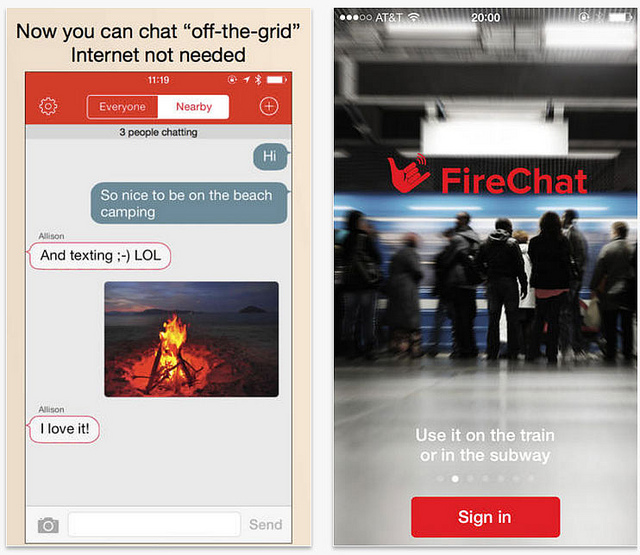 iOS users don’t get to have all the fun anymore. Android users can join in on the FireChat fun now, too!

FireChat’s ability to reach other users without an Internet connection or SMS has reached Android phones. Through a mixture of Bluetooth technology and FireChat’s own mesh network technology developed for Android, FireChat creator Open Garden that allowed the startup to extend the app to the Android platform. FireChat is now available on the Android platform. The newest version also includes a boost for iOS users too, cross-platform messaging, allowing Apple and Android users to chat via the app.

Like its iOS-only predecessor version, the new FireChat, dubbed “FireChat Love,” relies on peer-to-peer mesh networking technology to enable the network’s strength for off the grid communications. This technology is based on individual devices, so each smartphone or other device in the network helps strengthen it. Now Open Garden has added the infrastructure to facilitate building the network across the two largest smartphone platforms, providing the potential for the network to grow even further.

A larger network means messages can go further, making it more likely to reach someone further away without having to send a text or rely on data-supported messaging apps. Originally built based on a broadcast feature exclusive to Apple products, the technology that enables the AirDrop feature on MacBook computers, the Open Garden extended the technology to the Android platform using Bluetooth, which can carry the peer to peer mesh network.

FireChat’s CEO extolled the potential of the new FireChat in a press release:

“With summer around the corner, it’s time to spread the love and open the walled gardens of peer-to-peer communications. We named this release FireChat <3, aka ‘FireChat Love,’ because it brings people together,” said Micha Benoliel, Open Garden’s CEO and co-founder. “Up until now, off-the-grid messaging between iOS and Android was not possible. Now there is a bridge between these islands. This takes us one step closer to our vision of helping people connect, even when there is no infrastructure. In doing so, we enable communications off the grid, off the expensive data plans, and off the privacy invaders.”

FireChat’s new Android app has gotten some attention on Google Play. The app is already in the 500,000 to 1 million downloads tier. More than 11,000 users have left feedback and ratings for the new app. It currently has a 3.3/5 star rating on Google Play, suggesting it has some fans and detractors already. Android is just the beginning for Open Garden.

FireChat’s technology will be expanding beyond the borders of Open Garden’s app. The company confirmed to TechCrunch that it is working on a software development kit to make the technology available to third-party developers, further enabling the ability to chat without cell phone towers or data.