Google (NASDAQ:GOOG) closed the regular session down 0.86 percent on Thursday at $910.86 per share, as investors braced for what many expected to be underwhelming earnings reported after the bell.

Initial market reaction to the miss has been negative. Shares fell 4.15 percent in post-market trading. Negative sentiment was compounded by news that adjusted operating income as a share of revenue fell from 33 percent in the year-ago period to 28 percent in the second quarter of 2013.

Google pulled 55 percent of consolidated revenues from overseas in the second quarter. The company’s paid enterprise business is starting to seriously pick up across Asia, as companies such as India’s Madras Cements, South Korea’s Posco, and Japan’s ANA Holdings Inc. incorporate Google software into their businesses.

In a market where Microsoft (NASDAQ:MSFT) still dominates, Google is experiencing a boom, as Asian businesses adopt business-tailored versions of software such as Gmail, Google Maps, and other applications. Google enterprise tools also allow business software to be used on a variety of devices, and that is particularly important in Asia, where many access the Internet primarily through mobile devices, hampered by poor landline infrastructure.

Google said that just nine years after the inception of its enterprise wing, 58 percent of Fortune 500 companies now use some paid form of its software across their businesses. 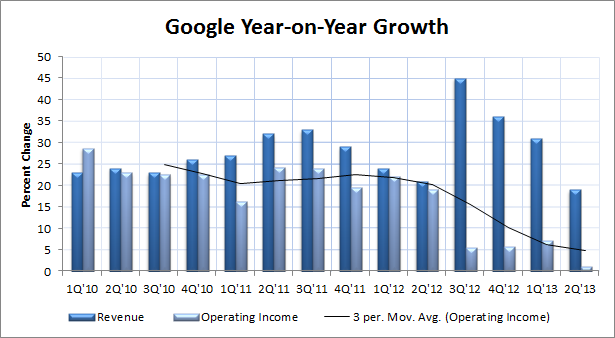