Google Maps, Yelp, and Foursquare All Bet on One Thing 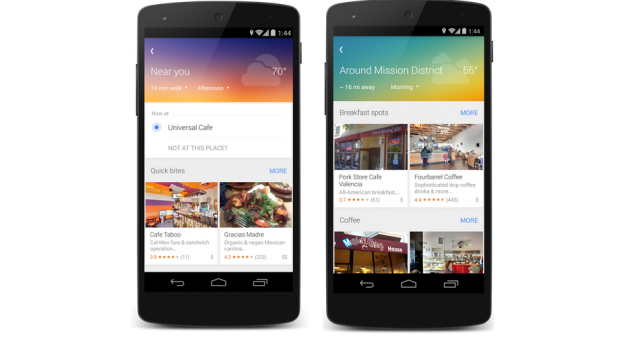 The next big thing for Google (NASDAQ:GOOG) (NASDAQ:GOOGL) Maps is actually the same thing that Foursquare and Yelp (NYSE:YELP) are trying to offer consumers: tools to search for and discover places and local businesses around their current location.

Google Maps’ addition of local discovery features was recently revealed with the unveiling of an update to the Android and Apple (NASDAQ:AAPL) iOS apps. In a post on the Google Maps blog, Taj Campbell, a Google Maps product manager, announced a new feature called Explore for the Google Maps app. The post describes the feature as a quick way to find interesting spots near your current location, or near another location that you’ve entered, such as when planning a trip for example.

“Now, whenever you want to discover places in your area, simply tap the new Explore button at the bottom right corner of your map to get a quick look at what’s nearby (where available.) With Explore as your guide, you’ll see different places and activities that adapt to each area and moment throughout your day. This also works when you’re browsing other neighborhoods and cities on the map so you can plan your day’s outing or daydream about your next vacation.”

Users can decide how to define what’s “nearby,” and can tell the app whether they want locations within a five-minute walk or a 20-minute drive. Explore’s suggestions change based on context, factoring in weather and time of day. Google notes that the feature performs best if users turn on the Location Reporting and Location History settings, which enable Google to use the device’s recent location data and store it in connection with a Google account.

The Explore feature will also provide more information about a user’s current location when he or she taps the “My Location” button or a blue dot on the map. From there, information like restaurant reviews and transit schedules are accessible, and users can save places for later. The blog post notes that the app will improve as users confirm the places that they visit. 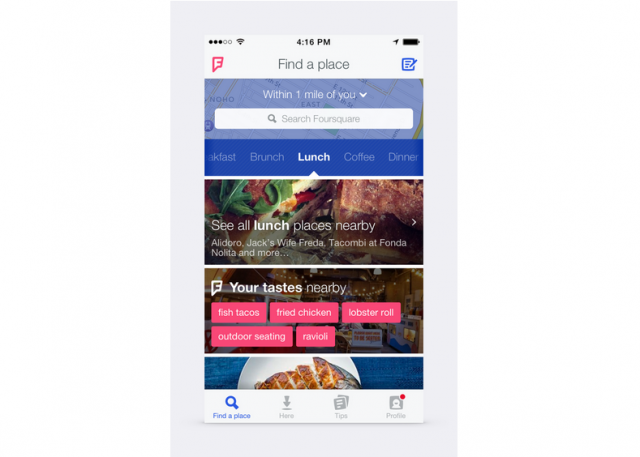 Mashable points out that the Explore feature “takes a jab at” Foursquare and Yelp, which enable users to explore nearby locations, read reviews, and check in. Or at least they used to; Foursquare is in the midst of reinventing itself, and an update this week did away with the Foursquare check-in. A post on the Foursquare blog noted that check-ins are moving to Foursquare’s recently debuted Swarm app.

The two apps work together, so that users who do have Swarm installed will see a “Check In” button on the page for a restaurant, for example, while those who don’t have Swarm installed will only see buttons to “Rate,” “Save,” and “Share.” Past check-ins, friends, and photos are migrated automatically to Swarm. Additionally, Mashable explains that Foursquare is clarifying the differences between Swarm and the main Foursquare app:

“Foursquare and Swarm will soon have two different friends lists. On Foursquare, a friend or follower will be able to give you recommendations. Swarm, however, will be relegated for the people whom you want to share your location with so you can better make plans.” 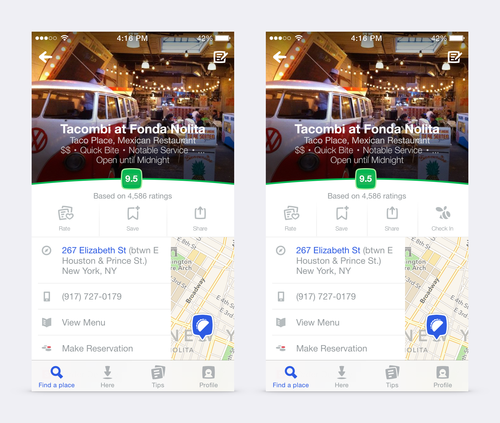 Foursquare’s blog post shows off the company’s new logo and screenshots of its redesigned app, but also notes that the company sees the updated app as the beginning of the “personalized local search” future that “we’ve been talking about since we started Foursquare.” The company notes that users who have been on Foursquare will continue to see their check-ins and history inform their recommendations, while new users will “still get all the benefits of a better way to explore any neighborhood, no check-ins required.”

Like Google Maps, Foursquare notes that the app will quickly improve as users add information. “No two people view the world exactly the same, so no two people will have the same experience with the app. Once you teach Foursquare a couple things about you — add tastes, follow experts, or even just walk around for a few days — the app will be 100 percent yours.” The post reveals that Foursquare is moving to focus primarily on discovery and recommendations. Rather than showing check-ins from friends or places that they’ve visited, users see tools that help them find places nearby — and that focus is similar both to that of Google Maps and Yelp. 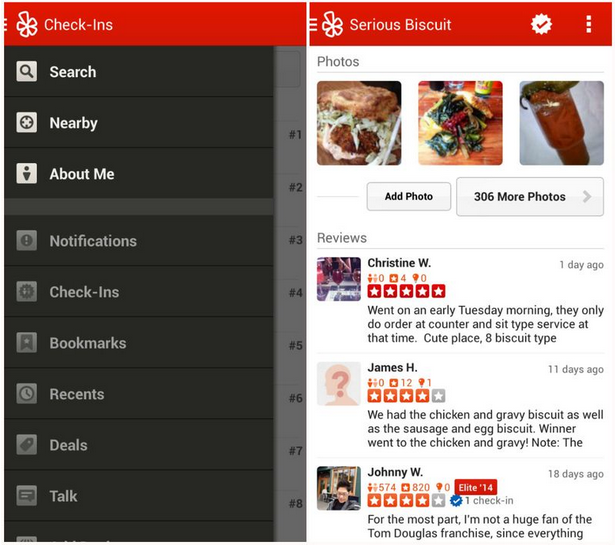 That makes Foursquare even more similar to Yelp, which has a similar focus on ratings and local discovery, though Mashable recently noted that Foursquare’s updated app looked like “a prettier version of Yelp.” Yelp is perhaps the most ubiquitous source of reviews, and can even integrate reviews from a user’s Facebook (NASDAQ:FB) friends. Yelp’s mobile app enables users to look for local places via a map view and a list view, and can filter results by a number of factors.

Early in July, Yelp noted in a post on its blog that 98 percent of Yelp users have made a purchase from a local business that they discovered through Yelp. Yelp said that Nielsen data found that many consumers preferred Yelp over other review sites like TripAdvisor and Angie’s List. When searching for restaurants, consumers said that they used Yelp three times as often as OpenTable, and four times as often as Zagat. Another recent post on the Yelp blog noted that the company had revamped its API, expanding developers’ access to Yelp data and moving to maximize Yelp’s exposure and advertising revenue.

“Yelp’s API, full of rich content about local businesses around the world, has been heavily integrated into some pretty cool projects, including Apple’s iOS and OS X, Yahoo Search, and the Pebble smartwatch,” Yelp wrote. “Thousands of companies have used Yelp’s API to build local information into their products and services, giving consumers even more access to great Yelp content, like Yelp review snippets, photos, ratings and business listing information.”

With both Google Maps and Foursquare moving into Yelp’s territory of helping users discover local places, each app is vying for users’ favor as their neighborhood guide of choice. Google Maps is becoming a tool that’s useful not only to get directions, but to discover places nearby and search for local businesses. That’s a direct pass at Yelp, which could plausibly see its traffic suffer as users have more options, including less obvious competitors like Facebook, to easily discover local businesses. While consumers have ranked Yelp’s reviews as high quality, trustworthy, and influential, better app experiences could pull users away and make it increasingly necessary for Yelp to rely on integrations with third-party apps.

While it may be logical for Google Maps to add to its array of features, it’s a more controversial choice for Foursquare to relegate what some users view as its main functionality to a supplementary app. As Foursquare tries to become a new destination for reviews and discovery, users are already complaining that it’s losing sight of its core utility: being able to see which of their friends were close, and where they were. The company’s logic behind the splitting of Foursquare and Swarm is that most people used Foursquare for check-in or discovery, but not for both, though ratings for Swarm have been low, with users complaining about the fragmented experience between the two apps.

Google’s bet on local discovery may be more likely to succeed than Foursquare’s or Yelp’s, as having everything, including directions, all in one app is most likely to appeal to consumers who want integrated and easy access to a variety of features. Features which, after all, are intended to make it easy to discover new places around them.