Here’s Why People Bought a PS4, Xbox One, or Wii U

You can’t hide from Nielsen. The “information and measurement company” holds a mirror up to humanity to show us who we truly are. The target of Nielsen’s latest survey is console gamers. Nielsen wanted to know who was buying the eighth generation of consoles (the Xbox One, PlayStation 4, and Wii U), and what made them choose one over the others. To find out, it sent a survey to gamers tease out the answers. 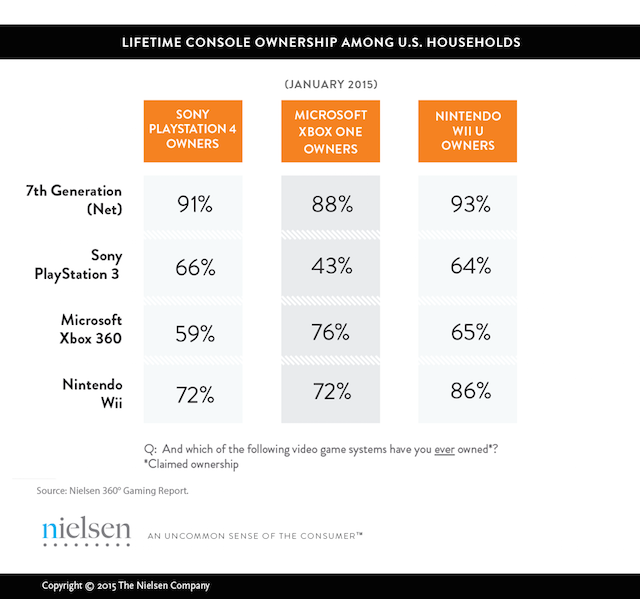 According to the results of the survey, nearly everyone who currently owns a new console has also owned at least one of the previous generation of game consoles: the Xbox 360, PlayStation 3, or Wii. That’s not too surprising, seeing as the new consoles are still fairly young — the Wii U came out in November 2012, while the Xbox One and PS4 launched in November 2013. We’re just leaving the “early adopter” stage of the new systems’ life cycle, and most early adopters of game consoles are serious gamers.

As for why owners of the newest game systems chose the one they did, the reason varies from console to console. The top reason PlayStation 4 owners chose that console is because they perceive it to offer “better resolution.” Xbox One owners mostly chose the console for its “brand,” and Wii U owners were mostly interested in “fun factor.”

These reasons all line up with the general reputations surrounding the systems. In 2014, resolution was a big talking point around the PlayStation 4, as several big cross-platform games were being released in 1080p for the PS4, but only 720p for the Xbox One. Meanwhile, the Xbox brand does have a reputation for being a premier online gaming system, and the Wii U’s fun factor is often discussed when talking about Nintendo’s first-party games, like Super Mario 3D World and Super Smash Bros. for Wii U. 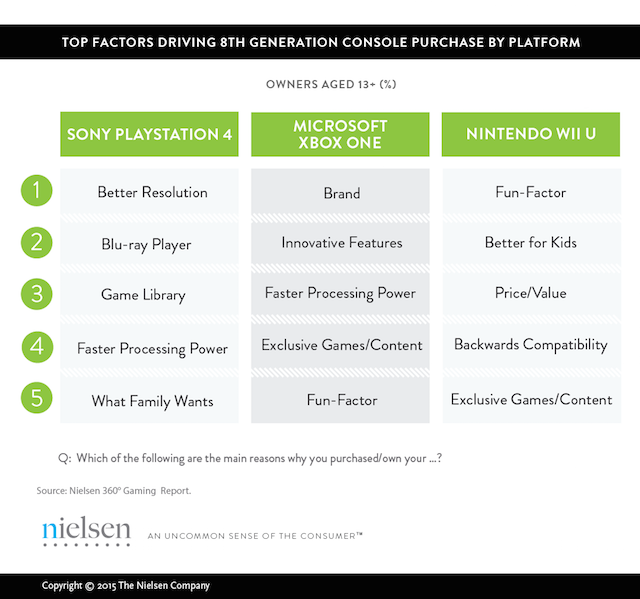 Other reasons PlayStation 4 owners chose the console is because of its Blu-ray player, game library, faster processing power, and because it’s the console their family wanted. Xbox One owners were interested in the console’s innovative features, faster processing power, exclusive games/content, and fun factor. Wii U owners liked its family friendliness, price/value, backwards compatibility, and its exclusive games/content.

Overall, those are mostly good reasons to own the respective consoles, although this does raise some questions. It’s not clear what the survey means by “faster processing power,” which PS4 and Xbox One owners both cited. Faster than what? The competition? The previous generation of consoles? Also, some responders don’t seem to realize that the Xbox One, like the PS4, can also play Blu-ray discs (the Wii U cannot).

One thing the article doesn’t state is how many customers Nielsen surveyed, so it’s hard to tell how representative of console owners these findings are. Still, it’s interesting to see official data on why customers are making the choices they’re making.

What the survey also doesn’t illustrate is why Xbox One sales are lagging so far behind PlayStation 4. Both consoles have similar libraries of games, and neither has much of a leg up when it comes to exclusive titles. That may change over time, and it could be that PlayStation 4 owners bought the console for its upcoming exclusives. But as it stands now, the Xbox One is a cheaper console with comparative specs.

The question that remains is whether or not buyers realize that.