Does Amazon Want You to Shop Automatically Without Actually Shopping?

In an ingeniously timed launch that had Twitter users speculating over whether it was an early April Fools’ joke, Amazon announced a program that will enable customers to order household items with the touch of a single, physical button. The Amazon Dash Button is Amazon’s latest in a series of moves to make shopping easier for customers. The goal it now seems to be aiming for is to make shopping easier by removing the need for you to actively shop at all.

The program represents a partnership with an assortment of consumer brands — including Bounty, Clorox, Glad, Tide, Huggies, Olay, and Gillette — that offers “important things you always run low on.” You hang, stick, or place the pill-shaped, WiFi-connected Dash Button in your kitchen, laundry room, bathroom, or “anywhere you store your favorite products.” When you’re running low on, say, laundry detergent, you press the Dash Button to reorder and Amazon will deliver your usual laundry detergent two days later.

When you first set up the Dash Button, you’ll have used the Amazon app on your smartphone to connect the button to your home WiFi network and select the product you want to reorder each time you touch the Dash Button. Once it’s connected, a single press automatically places an order, and Amazon explains that it will send an alert to your phone, enabling you to cancel if you change your mind. The Dash Button will respond only to an initial press before a product is delivered, as a safeguard against accidental multiple orders. Amazon Prime members can request an invitation to try the Dash Button now. Amazon says that users who are selected will receive an email with an invitation to select which brand-specific buttons they want in the coming weeks. 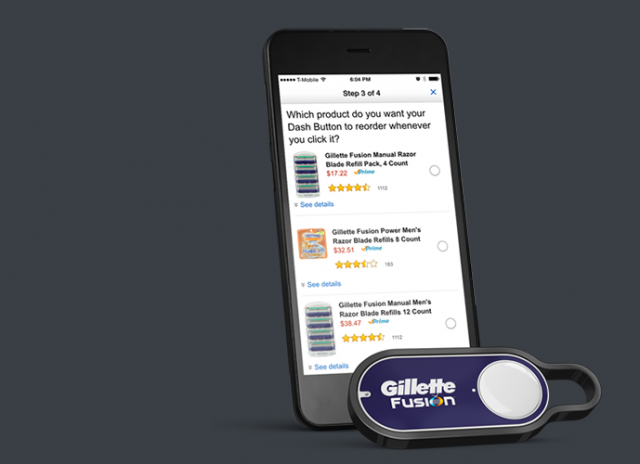 Amazon has already implemented a “Subscribe & Save” option on many expendable items. The option, visible on the page of a product that needs to be periodically replenished, offers customers the convenience of choosing to have products delivered every one to six months. For busy customers, that’s easier than making a one-time purchase and needing to remember to restock the product themselves.

As Mike Isaac notes in The New York Times, what Amazon is doing with the Dash Button program is important, “if not a bit outrageous.” He reports that buried in the documentation that accompanied the program’s release, is a description of the Dash Replenishment Service, or DRS, a way to build reordering products from Amazon directly into household devices. Whirlpool, one of Amazon’s test partners, will soon offer a washing machine that detects when you’re running low on detergent, and automatically orders a new box from Amazon. Quirky will sell a coffee pot that can not only reorder coffee beans from Amazon before you run out, but can also order coffee filters and a water filter. It will be able to measure the use of all three, and order each one separately, as necessary. Brita is developing a pitcher that can order new filters, and Brother is building a printer that will automatically order ink.

While the program will initially see Amazon partnering with just a few device makers to build the replenishment service into their products, Isaac characterizes the description of the service as a “call to arms for developers” and a bet that the future of at least some of Amazon’s retail operations will rely on the Internet of Things and its proliferation of connected devices. And he reports that Amazon says it wants to work with device makers of all sizes, “from Maytag to inventors tinkering in the garage.” While the partners will be limited at the outset, the company said that the service will be publicly available in the fall. 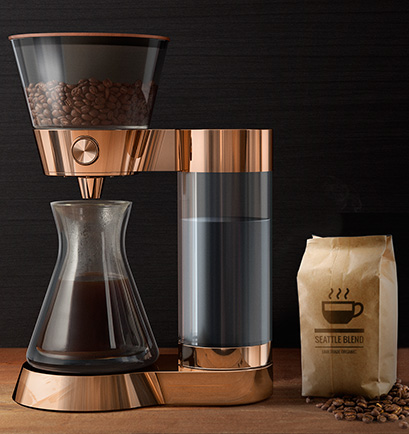 The more smart devices that are connected to DRS, the more people may find it convenient to skip the local grocery store and order everyday items from Amazon, instead. Isaac sees this as “classic Amazon strategy.” While Amazon would likely not make money on sales of connected devices from partner manufacturers, it would see increased demand through the automated ordering they enable. Amazon could also stand to benefit from the new troves of data it could collect on what we regularly shop for — even when that active shopping is taken out of the equation.

Timothy B. Lee at Vox writes that the Dash Button is the “future of computing,” and an example of how the plummeting cost of computer chips can change how we interact with computers. The Dash Button is capable of connecting to the Internet, something that would have cost $1,000 to $2,000 two decades ago. By the end of the last decade, an Internet-connected device could be built for $100 or $200 — inexpensive enough for families to buy some single-use computing devices, but still expensive enough that it only made sense to buy one if it offered a lot of value.

But prices have continued to fall, and are getting close to the point where you can build an Internet-connected computer for $10 or $20. Applications that seemed frivolous at $1,000 or even $100 now look sensible. A lightbulb you can turn on and off with your phone wouldn’t be worth $100 or $1,000, but at $10, you’re likely to consider it. Lee thinks that if current trends continue, Internet-connected computers will cost only $1 or $2 by the 2030s, a price at which no application would be too frivolous. The average family could have dozens of simple, connected devices — which won’t replace their smartphones or PCs, but will constitute the vast majority of the devices they own.