How Apple Is Reinventing iPhoto With the New Mac Photos App 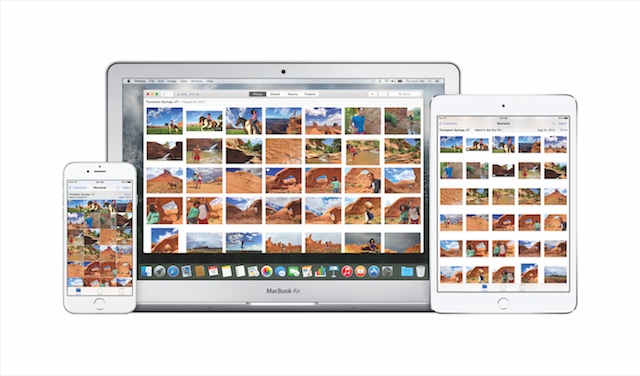 Apple is reinventing the way that you’ll handle the photos you take with the devices you use every day in a major reinvention of the familiar iPhoto software you’ve gotten used to on Mac. A public preview of its new Photos app has launched for users to test with the public beta of OS X 10.10.3. As Apple Insider reports, anyone in the public OS X Beta Program can test out Apple’s forthcoming Photos app for Mac, which is preinstalled in the latest 10.10.3 build. You can sign up for the beta program with your Apple ID. During the signup process, you’ll be prompted to make a backup of your Mac with Time Machine, see a warning about the possible drawbacks of testing beta software, and then install a program that registers your Mac with the beta program.

The new Photos app is Apple’s replacement for iPhoto on Mac. Its interface takes cues from the Photos app for iPhone and iPad, but it represents much more than a cosmetic upgrade. The new app is iPhoto reinvented with users’ multiscreen and cross-platform habits in mind, and enables users to take photos on a phone, tablet, or camera and have them sync effortlessly among devices. It also brings many of the features of the iOS Photos app to the Mac, including strong iCloud integration and a variety of automatic and manual editing features.

With the new Photos app you can:

Writing for The Verge, Josh Lowensohn and Nathan Ingraham report that while it’s easy to take and share photos, what to do with them afterward — storing and organizing them — is a big problem. The new Photos app rethinks how users manage their photo library on a Mac, terrain that’s been iPhoto’s for more than a decade. Apple is discontinuing iPhoto along with Aperture — a professional organization and editing tool that will be removed from the Mac App store in the spring, when Photos is distributed on new computers. The Photos app brings the same tools that users have become familiar with on the iPhone and iPad to the Mac.

Users can now store every image they shoot on their iPhone in iCloud Drive, and Apple gives them the option to optimize storage on their devices by storing the full images live in iCloud. Instead of locally storing every image in full resolution, smaller, optimized images that take up less space will be displayed on mobile devices and even on Mac. Photos can import JPG and RAW files and treat them like the photos shot on iPhone. Photos also enables users to make edits, create calendars and books, use face detection to sort photos by the people in them, and share photos in iCloud or with third-party services.

The app is much more lightweight than iPhoto or Aperture, but won’t function as an Aperture replacement. But almost everything in iPhoto found its way into Photos. Apple will let users move their iPhoto or Aperture library into Photos and preserve their edits, and iOS users who have turned on iCloud Photo Library will see all of their photos and albums show up in Photos.

TechCrunch’s Darrell Etherington noted when Apple launched the developer preview of the Photos app in February that Photos reflects the maturation of the general consumer as a photographer. Photos was designed with a cross-platform user experience in mind, and is built for the speed and scale that users need as they use better cameras and take more photos. Photos represents a shift in Apple’s software strategy, and making Photos a single experience available on both iOS and Mac helps the process of editing and organizing photos to transcend the particular device on which users complete these tasks.

Our communications, media consumption, and other connected activities increasingly revolve around multiple screens. In a world where users increasingly own a computer, a tablet, and a smartphone, it makes sense to sell software as a utility to make the switching between screens more seamless. Syncing issues are one of the major complaints reported by users in a study by market research agency Trinity McQueen on the “multiscreen life.” As Apple builds out its hardware and software ecosystem, it will try to sell consumers on the value of completely immersing themselves in that ecosystem, and the ease with which Photos lends itself to the multiscreen lifestyle will only further reinforce its point.