Why Google Is Being Charged By The European Union 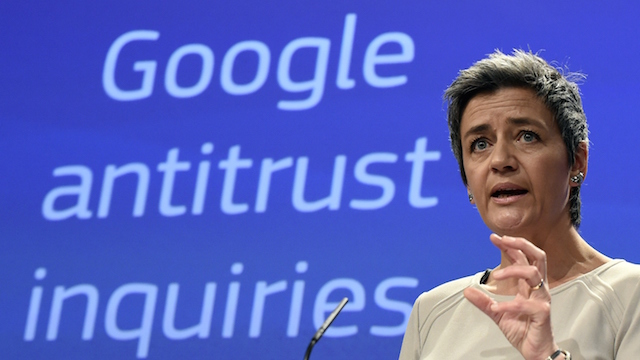 It has also begun official proceedings to investigate whether Google’s Android operating system forces phonemakers to favor Google’s services and apps. Margrethe Vestager, the European Union competition commissioner, explained, “If the investigation confirmed our concerns, Google would have to face the legal consequences and change the way it does business in Europe.”

The abuse charge centered around accusations that Google diverts traffic from its competitors to its own products and services, particularly when it comes to shopping websites. These allegations led the European Commission to issue a set of formal charges, known as a Statement of Objections, and Vestager said the inquiry might eventually expand beyond shopping sites.

Many online operators have complained about Google abusing its dominance in other areas, such as travel and mapping. The preliminary conclusions, outlined in the Statement of Objections, are as follows (emphasis in original):

Google systematically positions and prominently displays its comparison shopping service in its general search results pages, irrespective of its merits. This conduct started in 2008.

Froogle, Google’s first comparison shopping service, did not benefit from any favourable treatment, and performed poorly.

Google’s conduct has a negative impact on consumers and innovation. It means that users do not necessarily see the most relevant comparison shopping results in response to their queries, and that incentives to innovate from rivals are lowered as they know that however good their product, they will not benefit from the same prominence as Google’s product.

The European Commission also said it was stepping up a separate investigation into whether the phonemakers who use Google’s Android operating system face contractual requirements to place Google’s apps in prominent positions on their mobile devices. Vestager said, “Smartphones, tablets and similar devices play an increasing role in many people’s daily lives, and I want to make sure the markets in this area can flourish without anticompetitive constraints imposed by any company.”

Android is the largest mobile operating system in the world, with approximately an 81% market share, compared to Apple’s 15% stake and Microsoft’s less than 3%.

The New York Times reports that Google defended itself against the accusations with several blog posts. In a post to Google’s official blog, titled, “The Search for Harm,” Senior Vice President of Google Search Amit Singhal wrote, “While Google may be the most used search engine, people can now find and access information in numerous different ways — and allegations of harm, for consumers and competitors, have proved to be wide of the mark.” He enumerated the choices that users have for search engines, shopping sites, social networks, and news providers, and cited specific examples to counter the idea that Google has used its dominance in search to hurt the businesses of competitors.

“Companies like Axel Springer, Expedia, TripAdvisor, and Yelp (all vociferous complainants in this process) have alleged that Google’s practice of including our specialized results (Flight Search, Maps, Local results, etc.) in search has significantly harmed their businesses,” he wrote. “But their traffic, revenues and profits (as well as the pitch they make to investors) tell a very different story.”

In another post to the Google blog, this one titled, “Android has helped create more choice and innovation on mobile than ever before,” Android Vice President of Engineering Hiroshi Lockheimer wrote that Android partner agreements are “voluntary — again, you can use Android without Google — but provide real benefits to Android users, developers and the broader ecosystem.” He added, “And in comparison to Apple — the world’s most profitable (mobile) phone company — there are far fewer Google apps pre-installed on Android phones than Apple apps on iOS devices.”

The case is brought as the biggest American tech companies increasingly face scrutiny by European regulators. The Times notes that Vestager seemed intent on countering criticism that Europe’s antitrust officials are being protectionist and anti-American in taking on not only Google, but Apple in Ireland, Amazon in Luxembourg, and investigating how companies like Facebook really protect users’ data. It’s possible that tax, antitrust, and privacy rulings could cut into their profits and influence their operations around the world.

Google has 10 weeks to respond to the charges. An internal memo, obtained by Re/code, told Google employees that the impending charges were “very disappointing news” but maintained, “We have a very strong case, with especially good arguments when it comes to better services for users and increased competition.”

The New York Times reports that if Google fails to rebut the formal charges, Vestager could levy a fine that could surpass 6 billion euros — about 10% of Google’s most recent annual revenue — but the largest single fine yet levied in such a case was the 1.1 billion euros the commission fined Intel for abusing its dominance of the computer chip market. Google could also settle the matter, but whatever the company negotiates, the deal is expected to have a greater impact on its business than three previous attempts to settle with Vestager’s predecessor.