How Facebook Will Get You to Use Messenger for Everything 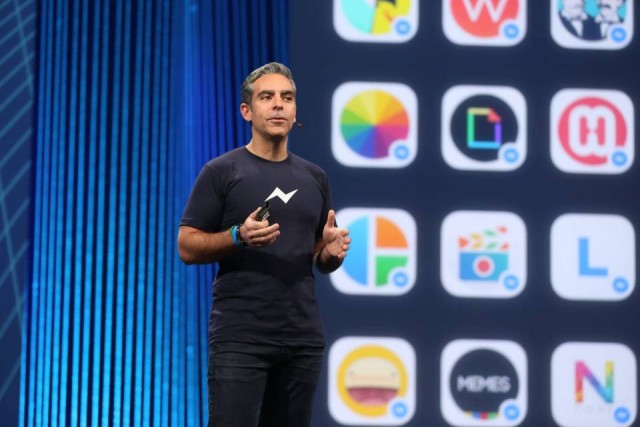 At Facebook’s F8 developer conference in San Francisco, the social network announced it will enable developers to create apps that integrate with Messenger, its messaging app that now has 600 million monthly active users. Facebook chief executive Mark Zuckerberg said that Facebook wants to make it easier for those users to share more content through Messenger. The social network unveiled more than 40 new apps that enable users to “enhance their conversations with GIFs, photos, videos, audio clips,” and other forms of “creative expression.”

You can discover these apps via the composer, or tap Install when a friend sends you a message from a Messenger Platform app. Facebook’s Messenger head, David Marcus, formerly president of PayPal, said that more than 40 apps are participating at the launch of Messenger Platform. These first apps are available on Messenger now, and Facebook has already opened the Messenger Platform to developers. In a post on its developers’ site, where it lists the first 47 apps integrated with Messenger, Facebook explains:

With Messenger Platform, an app’s content can be shared through private and group messages to spark conversations that are creative and expressive, while providing developers with growth and reengagement opportunities. Messenger Platform apps can display the option for a person to install the app from within Messenger, or to reply using content from the app. If the person receiving the message doesn’t already have an app installed, they can tap Install to be taken directly to the app store to get started using the app. This means people can discover apps recommended by their friends, naturally through their conversations. 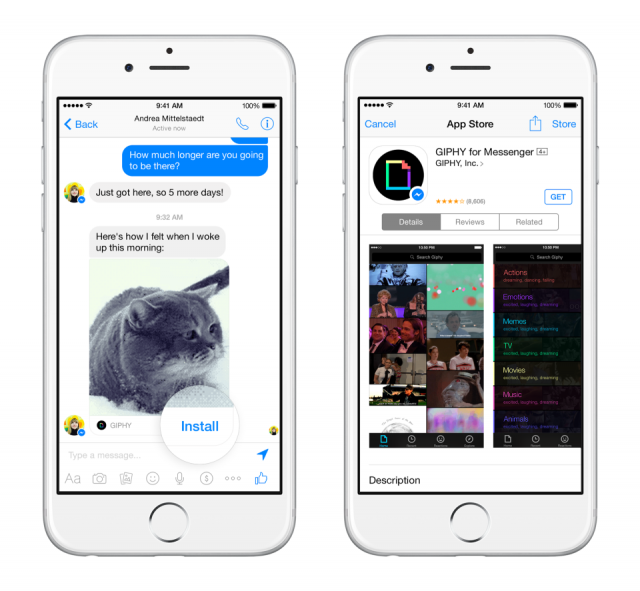 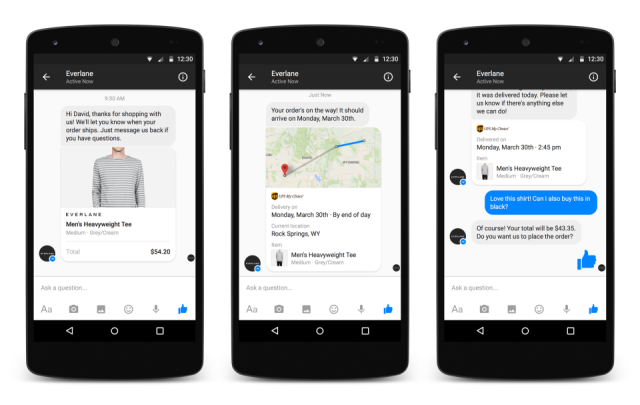 Throughout the process, you’ll have the option to ask a question or make a request of the company you’re doing business with, and Facebook promises that you’ll “get quick responses” through this “single, ongoing thread between the person and the business.” Facebook’s initial partners for the feature are Everlane and Zulily, and additional merchants will be added in the coming months. According to Time, Zuckerberg said of the feature, “I don’t know anyone who likes calling businesses — it’s just not fast. Helping people communicate more naturally with businesses is going to improve almost every person’s life.”

Rachel Metz of MIT’s Technology Review characterizes the move as a response to the growing popularity of mobile messaging apps. She points out that users of Facebook Messenger can already share photos, videos, stickers, and maps of their location. They can also make voice calls through the app and send money to other users. But enabling third-party developers to integrate with the app could prove an advantage over apps like WeChat and Snapchat. The Messenger Platform will also help the app to take over some of the tasks and functionality that we’d normally need email or even other apps for, therefore helping Facebook to push Messenger even closer to the center of your conversations and communications. 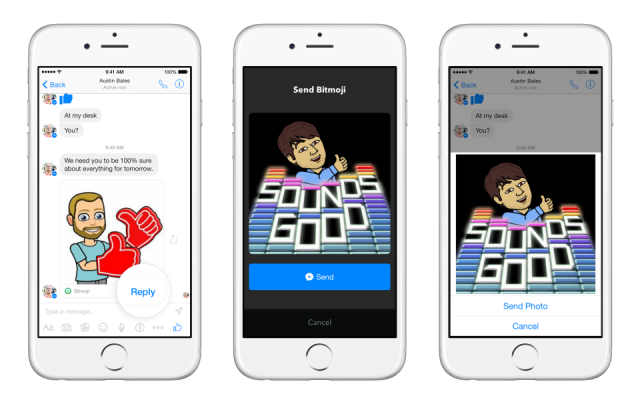 Casey Newton, writing for The Verge, explains that ever since Facebook split Messenger off from its main app last spring, it’s been laying the foundation for Messenger to become the western world’s answer to Asia’s mega-messengers: apps like LINE and WeChat, which combine communication, gaming, e-commerce, and more into a single platform. The GIF-sending apps don’t seem like a big deal alone, but when you consider Businesses on Messenger, “Presto,” Newton writes, “Messenger is now an e-commerce platform.” Messaging apps are positioned to succeed email as powerful advertising tools on a platform that feels personal.

Newton spoke with Chris Cox, Facebook’s chief product officer, who characterized Messenger Platform as a sort of experiment. “We’ll see what people need, and what they want out of it. You learn a lot watching people try to use it.” Messenger has jumped into the running to become the next mega-messenger and build a platform on top of a service we use to communicate and interact with the people we care about. And if all goes according to plan, Facebook will leverage Messenger’s central location in many users’ social lives to get you to use it for everything.

Some of the new functions of Messenger will replace activities you currently complete in a browser, and some that you might carry out in other apps, according to Steven Levy of Backchannel. He explains that Facebook has always believed that asynchronous nature of email is ill-suited to the always-on “social graph” that connects us to our friends and family, and has long tried to offer an escape from “the tyranny of the inbox.” 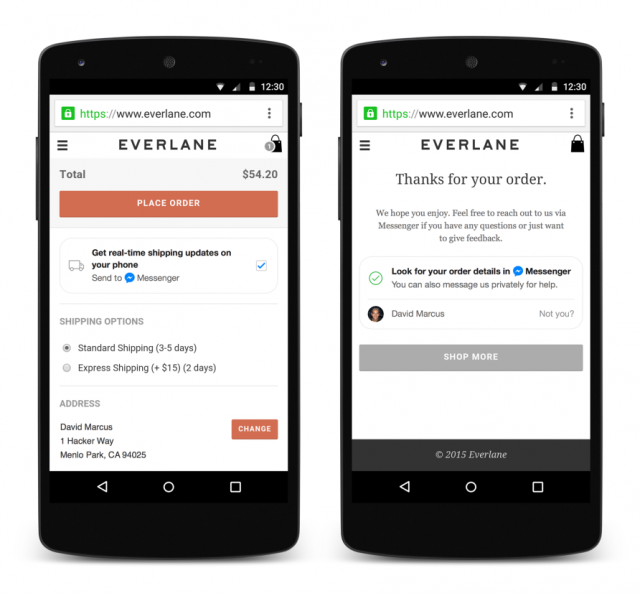 Messenger is trying to replace email for many kinds of communication, and Facebook is hoping that Messenger will become as integrated into your daily life as its main app is now. Levy points out that the number one app in terms of where users spend their time is Facebook. Below it rank various browsers, email services, and apps, and by further pulling functionality and time from those others, Facebook wants to make Messenger a central platform for mobile users.

Under Marcus’s leadership, Facebook has demonstrated that separating the messaging functionality from the social network’s main app enables it to operate Messenger as a platform. Third party developers will inevitably add thousands of features, tools, and distractions. With each addition, users will have fewer reasons to need to exit Facebook’s world.

Asked when he thinks that the conversational paradigm offered by Messenger will eclipse email, he replies, “It’s hard to say. People might want to have both for a while because they are used to having emails.” But he adds, “Over time, as we build capabilities and more interaction in those threads, the utility goes up, and the need for you to have something else goes down.”