How Food Companies Knew Years Ago What You’ll Eat Tonight 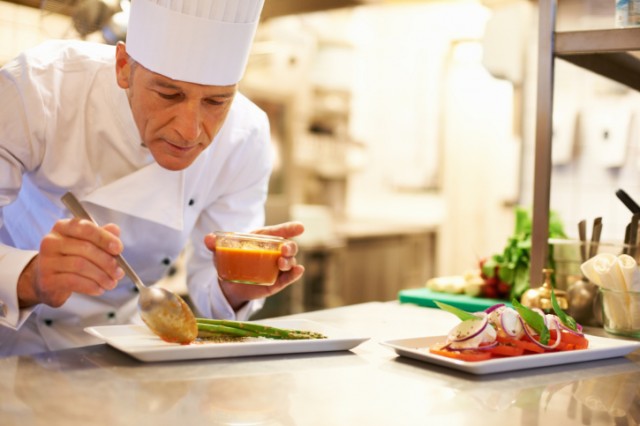 When did you decide what you wanted for dinner? Maybe 20 minutes before you started cooking, ordered takeout, or chose a restaurant? Maybe a few nights ago, when you made plans with friends, or perhaps a few days ago, if you’re really organized, when you planned what groceries to buy for the week? In any of those cases, there’s someone who knew what you’d want to eat long before you did: professional food trend forecasters who predicted the rise of Greek yogurt, kale, or the cronut.

For a fascinating piece aptly named “These people know what you’re going to want to eat before you do,” Vox’s David Sax spoke with a variety of food trend forecasters to find out how the process of predicting food trends works. It turns out that it takes a lot of smart data analysis and a healthy dose of instinct about what people are going to want to eat.

Sax started with Barb Stuckey, a food developer for food and drink innovation firm Mattson. Mattson describes its team as “specialists in new food and beverage products.” Mattson and a few other companies like it take on clients from the food industry who are interested in developing products that correlate with what customers want when they want it, and not after. Stuckey looks at the trends that relate to the specific demographics and market that a client is trying to target, using market research, data analysis, and trips into “the field” to observe food trends where they originate and as they unfold.

Sax reported on how the process works and why it’s necessary for companies to pay attention to the trends that define what customers crave when they consider what to eat for dinner:

“If you haven’t already noticed, America is in the throes of food-trend fever.  What was once the preoccupation of epicures and gourmands has now become everyday popular culture, as cupcake bakeries continue to pop up in the heartland, and once-obscure flavors, like Thailand’s Sriracha hot sauce, become as familiar as Heinz ketchup in our pantries. New food trends are popping up quicker, spreading more widely, and flaming out faster than ever before, which makes the food industry’s job of appropriating them much more difficult.  By the time a fast food chain has test marketed its line of Cronut knockoffs, the wave of public interest has already passed.  Figuring out what the next food trends will be, and strategizing how to capitalize on them, has become that much more important. This has been a boon for the world of food trend predictions and forecasting, a small, highly influential subset of the food industry that has grown alongside the prominence of food trends.”

Enabling clients to experience diverse trends in equally diverse settings is part of Mattson’s strategy in helping clients identify what’s next. While small food companies or chefs at independent restaurants can quickly add new products according to taste and trend, the innovation process takes years at large corporations. Because the development process at mainstream food companies takes years and millions of dollars, risk-averse executives rely on food trend forecasting to make sure that they get it right.

Food trend forecasting is a practice that Sax, via Vox, says “combines culinary obsession and food knowledge with economics, data aggregation, sociology, and anthropological field research” into a discipline he terms the “intelligence wing of the food industry.” The research involves compiling data on what consumers eat and what they’d like to be eating, drawing trends based on that data, and figuring out where the trends are headed. The data come from consumer surveys, sales figures, and quantitative research, all studied with the goal of predicting trends with enough time to prepare.

Trends originate in a variety of places. Some start with flavors that grow popular in specialized markets and immigrant communities, then are naturally incorporated into mainstream menus. Other trends originate with suppliers, who drive demand for a specific flavor with marketing campaigns. And still others originate from a more traditional source: the chefs behind fine dining experiences, whose flavors and dishes eventually make it to the mainstream market. But the path a trend takes isn’t as straightforward or predictable as it once was.

Trend cycles are growing shorter, which makes it critical for big brands to be prepared so that they don’t respond to a trend after consumer interest has waned — that is, when it’s already too late. Sax says that trends can’t be relied upon to follow their traditional vertical paths “from high-end kitchens to restaurant chains and eventually to supermarket products” anymore. He writes, “Today trends are flying in from all directions, emerging from sideways influences, bottom-up tastemakers, and landing without warning from way out beyond the periphery.”

And as much data is involved, instinct still plays a role, too. Kara Nielsen of food innovation firm Sterling Rice told Sax that there is a difference between trends, which are slow to develop and have deep cultural roots, with fads, which are “superficial manifestations” of the trends. And Peter Mattson told Sax that food trend forecasters “need to have an irrational obsession with food,” combining creativity with the intellectual ability to formulate and substantiate hypotheses about potential trends.

That capability comes into play not only for forecasters at firms whose clients are big food companies, but also at those companies themselves. For McCormick, which produces a Flavor Forecast annually, predictions based on knowledge of the industry, marketing and customer research, and opinions from a panel of outside tastemakers, become self-fulfilling prophecies. Hundreds of flavor combinations — which have to work “within at least three categories, such as a savory main, snack food, and a cocktail” — are tested until 10 are chosen for the final report, according to Sax’s Vox piece.

Then product development kicks in, and industrial and consumer products are set in motion. Clients rely on the trends in the Flavor Forecast as predictions for the way the market will go, and then place orders for that flavor. Sax notes, “ If they call something a trend and then use that prediction to sell those flavors up and down the food chain, it’s like Goldman Sachs putting a buy rating on a stock they’re promoting and then profiting when the stock’s price inevitably goes up in reaction to that rating.”

And while the McCormick method may rely a little less on true trend forecasting, perhaps the ultimate example of using data to predict trends is the work of trend forecaster Suzy Badaracco, who began her career as a forensic photographer and criminalist. Sax writes, “She is trained in military-grade intelligence and chaos theory with an expertise in pattern recognition, and she employs the same methodology developed by the US Marines, FBI, and Scotland Yard to predict military strikes, terrorist attacks, and murder sprees.”

Badaracco’s firm, Culinary Tides, aggregates data from industry reports, published articles, government trade reports, scientific studies, and other statistics like travel trends. A database analyzes more than 1,400 reports per month for about 200 units of data per client, and builds an 18-month “predictive window” based on the specific needs of the client. “We deal with white space — things that don’t exist,” Badaracco said to Sax. “Chaos theory. And we prove it will exist by massive amounts of quantitative data.” Unlike other forecasters, she doesn’t rely on field research and firsthand observation.

But she does agree with other food trend forecasters that food trends evolve more quickly, in less predictable ways, and the uncertainty makes forecasts increasingly necessary for the mainstream food industry professionals looking to stay ahead of the curve. Some companies are more able to shape trends than just capitalize on them, but either way, figuring out what’s going to be a successful.

And if you want an illustration of the complexity of trends and their inevitable rise and fall, just look to the newest data tool that’s making the rounds of tech blogs now. Yelp Trends analyzes Yelp’s 57 million reviews to count the usages of a given word — craft beer, kale, cupcake, pumpkin — in the reviews that the platform’s users have written in various cities.

Tracking is a lot easier than forecasting, but if you’re curious about what food trends we’re in the middle of now, a new tool from Yelp can shed a little light. While the tool isn’t meant for prediction and isn’t nearly as far-reaching as the data analysis that real food trend forecasters use, it’s interesting to watch the progression of trends that forecasters predicted years ago.

In San Francisco, the number of reviews mentioning craft beer surpassed the number that mentioned PBR early in 2013.

In Los Angeles, the cronut took off as the cupcake was in decline.

Kale is slowly climbing toward avocado, which recently surpassed spinach as the most popular choice among New Yorkers.

In New York, kimchi’s spikes in popularity have evened out as Sriracha has been less popular, but on a steady climb.

Bubble tea, while popular in 2006 and 2007, has remained less popular than smoothies and juice in Chicago.

Yelp’s data goes back to 2006, and while it’s not as reliable or scientific as Google Trends or other trend analysis tools, it’s fun. Playing with the tool enables you to compare the rise and fall of the same trend in different cities, and to compare how different trends overlap with another.

That reveals the power and value of data on consumers’ behavior and preferences, and as Sax points out in his Vox article, makes it clear that there’s only one thing about the trends beyond the scope of forecasters’ current analysis: that there will be an ever-growing number of predictions about what we’ll eat, what we’ll drink, what we’ll order on a night out versus what we’ll put in our carts at the grocery store (or on our computers, tablets, or phones, if Amazon and Instacart have anything to do with it).

So the next time you try Starbucks’ new drink or notice a new flavor popping up at every chain restaurant, you can be pretty confident that a host of food trend forecasters and industry experts knew it was coming — and are just waiting for your reaction to see how the trend plays out.