How Google Re-Envisions Controlling a Car Even More 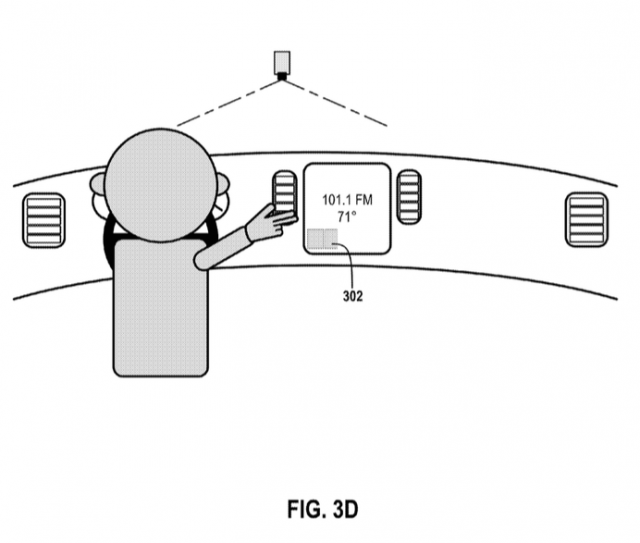 With its work on self-driving cars, Google has reimagined the way that drivers control their vehicles. Based on a patent recently granted to the company, the tech firm continues to envision new ways to make controlling a car more intuitive and less distracting.

The patent, awarded on January 27 and spotted by Quartz, describes a system for controlling a car with gestures, negating the need to touch all the knobs, dials, and screens that currently distract drivers when they’re on the road.

Patent No. 8,942,881, for “Gesture-based automotive controls,” describes Google’s vision for placing sensors throughout the interior of a car and using them to detect hand gestures made by the driver. Quartz reports that the system seems aimed at making a car more intuitive to control, and drivers could learn and use an assortment of gestures to control the functions of their vehicle without taking their eyes off the road.

Users could get directions to a destination, change the temperature of the vehicle, or change the volume of music playing without having to locate and manipulate the corresponding buttons or knobs on the dashboard. The patent explains that while the user is driving, it can be difficult to locate and manipulate controls, and that the locations in the vehicle where controls can be placed are limited.

Using a system for gesture control, the driver or a passenger of the vehicle would be able to perform gestures with his or her hands, fingers, arms, legs, head, or a combination thereof. The gestures feature shipping, tapping, pointing, grasping, pinching, or waving, as well as other movements, like those used in American Sign Language.

Those gestures could be performed in regions of the vehicle like the steering wheel, dashboard, air conditioning vent, seat, headrest, arm rest, or rearview mirror, or in relation to the ear, arm, or shoulder of the user. The regions could also include the space between the driver’s head and the steering wheel, or the region between the driver’s head and the window.

Gestures made in those spaces could serve the purpose of modifying the volume or music selection in the vehicle, changing the volume or content of an entertainment system or other display, modifying the fan speed or temperature of the climate control system, moving the position of a seat, switching the action of the windshield wipers, opening or closing a window, or adjusting the speed of the cruise control system.

For instance, the driver could swipe his or her hand down near the car window to open it, swipe a hand to the left near an air conditioning vent to lower the temperature, and all the while keep one hand on the wheel and avoid looking away from the road.

The method also sees the system “selecting, based on the correlation, a function associated with the given gesture in combination with the given region, and initiating the function in the vehicle.”

Quartz writes that many patents are awarded to companies that don’t have any immediate plans of using them in a consumer product. In an email to Quartz, Google said that it holds “patents on a variety of ideas–some of those ideas later mature into real products or services, some don’t. Prospective product announcements should not necessarily be inferred from our patents.” But if the company did decide to implement the technology, it could easily find a home in Google’s self-driving cars, with the patent using as an example of a vehicle “configured to operate in an autonomous mode.”

In today’s age of drivers being distracted by smartphones, dashboard touchscreens, and even voice-activated personal assistants, it’s possible that Google’s gesture control tech could be a way to reduce distractions and keep drivers’ eyes on the road. However, it’s worth noting that users would need to remember the actions that different gestures trigger, and the technology would need to minimize the cognitive distraction of controlling different functions of the car.

The U.S. government lists some of the statistics on distracted driving, which it notes is caused by distractions including texting, using a phone, or using a navigation system. Often at fault is text messaging, which requires visual, manual, and cognitive attention from the driver and is therefore “by far the most alarming distraction.”

Engaging in visual-manual subtasks — like reaching for a phone, dialing, and texting — reportedly increases the risk of getting into a crash by three times. Additionally, five seconds, the average time that a driver’s eyes are off the road while texting, is enough time to cover the length of a football field blindfolded when traveling 55 miles per hour.