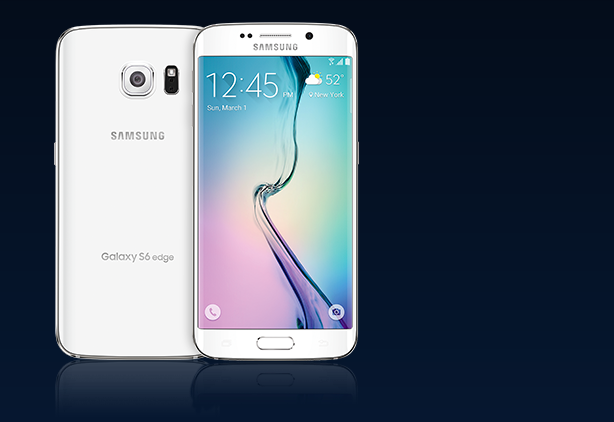 Some tech-savvy consumers prefer Apple’s iPhones to flagship smartphones built on Google’s Android, while some prefer phones like Samsung’s Galaxy phones. But those who think that the iPhone is always better than one of Samsung’s flagship phones may need to rethink that philosophy. Joanna Stern writes in the Wall Street Journal that the Galaxy S6 and the Galaxy S6 Edge overturn some “basic truths” about Samsung’s phones: that they’re made of cheap plastic, that their cameras can’t keep up with the iPhone’s, and that their Android software is impossibly cluttered.

But none of that is true anymore with the Samsung Galaxy S6 and the S6 Edge, which begins shipping in the United States on today. The new design and new materials of the flagship smartphones underscore the earnestness of Samsung’s effort to regain the ground it lost following the lukewarm reception of its last flagship phone. Neither of the new Galaxy phones offer original ideas, and Samsung has removed some of the features that traditionally differentiated its phones from its competitors’, including waterproof design, removable storage, and removable battery. But with the series of improvements that the S6 and S6 Edge offer, Stern says that the Galaxy has a leg up on not only other Android phones, but also the iPhone.

The Galaxy S6 is a 5.1-inch smartphone that features rounded edges. The S6 Edge is a similar phone with the same size screen as the Galaxy S6, but features edges that curve downward at the right and left sides of the phone. The new smartphones will be available in three colors — Black Sapphire, White Pearl, and Gold Platinum — and offer the choice of 32GB, 64GB, and 128GB of memory. Stern says that the S6’s design looks like “a compilation of the iPhone’s greatest hits,” and both phones measure just 0.27 inches thick, like the iPhone 6.

As Farhad Manjoo pointed out in The New York Times, data from IDC shows that Samsung surpassed all smartphone makers in market share until last year. Then came the Galaxy S5, a smartphone criticized by reviewers and users alike for its cheap hardware and convoluted software. That misstep, coupled with increased competition from Apple and Chinese phone makers like Xiaomi, saw Samsung’s market share and profit begin to decline. With the S6 and S6 Edge, Samsung will attempt to reverse that slide. Manjoo says that the new smartphones seem “designed to convey a simple message: Samsung has changed.” 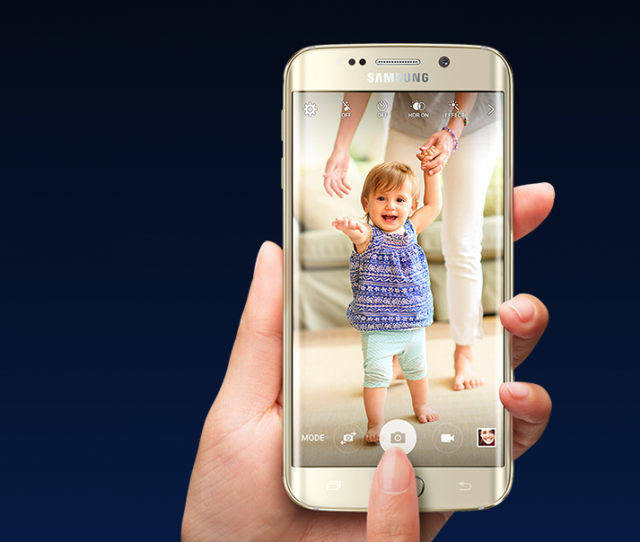 That message is communicated most overtly by the physical design of the phones. Samsung replaced the faux-leather and faux-metal of its previous phones with glass and aluminum reminiscent of Apple’s iPhones or other high-end Android phones.

The front glass on the S6 Edge features a gentle curve along the sides of the screen. Manjoo notes that these sloping edges make the phone easier to hold, and offer room for useful features, like the phone’s ability to display the time on the edge of the screen at night. But he also characterizes the feature as gimmicky, one in a long-standing series of unnecessary options that Samsung has packed into its phones. Samsung has reduced the number of features and user menus throughout the phones’ software, and Manjoo says that the software feels cleaner and easier to use.

The Galaxy S6 and S6 Edge will have formidable competition from the iPhone 6 and iPhone 6 Plus, which sold in record numbers after Apple unveiled them last fall. Their sales, which propelled Apple to a quarter of world-record profits, also pushed Apple into a tie with Samsung for global market share in the fourth quarter. Each company had 20% of the market, but Apple was on its way up, while Samsung was on the decline from 30% the year before. While Apple is Samsung’s competition at the high end, Samsung is also contending with an array of smartphone makers on the low end, like China’s Xiaomi and India’s Micromax.

Writing for VentureBeat, Mark Sullivan notes that the 5.1-inch, 577 pixels-per-inch HD super-AMOLED displays are brighter than those of earlier Samsung devices, and are easier to see in sunlight. The phones’ 577 pixels-per-inch screens also compare favorably to the iPhone 6’s 4.7-inch display with 326 ppi. Stern notes that this translates into sharper photos, video, and text on Samsung’s phones versus Apple’s.

However, CNET’s Roger Cheng notes that the shift in materials comes with sacrifices, as Samsung dropped the microSD slot for expandable memory and the removable battery. But Samsung tries to make up for that loss with a variety of hardware features that make it more competitive with the iPhone and other top-of-the-line Android phones. 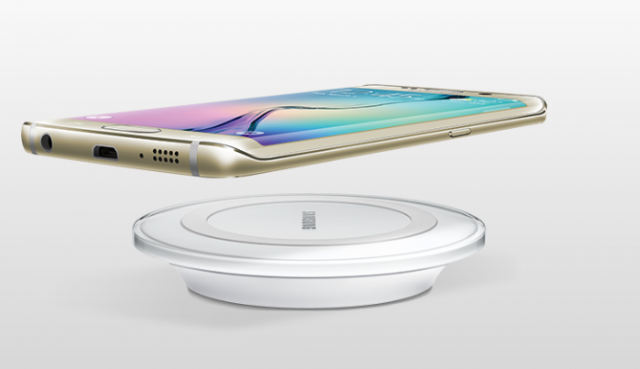 How do the S6 and S6 Edge measure up against the iPhone?

Both the S6 and the S6 Edge have dual-lens 16-megapixel cameras with F1.9 shutter speed. They also feature what Samsung calls auto real-time HDR, designed to reduce shutter lag. A sensor detects the white balance and auto-corrects it, and image stabilization software reduces blurring caused by moving the phone. An autofocus feature places a square around faces and follows them as they move.

Sullivan says that in tests of the cameras on the iPhone 6 and the Galaxy S6, he noticed a difference in image clarity, detail, and white balance. He says that Samsung’s camera produced a brighter shot that’s more true to life than the iPhone’s shot, while the iPhone 6 produced an image that was sharp, with a more dramatic balance between light and dark. A test by The Verge concluded that the S6’s shots are a little warmer than the iPhone 6’s, “but not offensively so,” and the two phones handle low-light differently. Stern says that while the iPhone’s low-light shots were more washed out, the coloring was more accurate, and Samsung’s phones struggled to autofocus quickly in low light.

Stern also reports that despite the higher-resolution screen, the Galaxy S6 gets slightly better battery life than the iPhone 6. In a battery test, which cycles through a series of websites with brightness set at about 75%, the S6 lasted just over seven hours, while the iPhone 6 lasted six-and-a-half hours, as did the Galaxy S6 Edge. While there’s no more swappable battery, Samsung attempts to make up for that with faster charging. Stern says she was able to get a 50% charge within 30 minutes. Both the S6 and the S6 Edge integrate wireless charging and support the WPC and PMA wireless charging standards. Samsung says the phones wirelessly charge their batteries to 20% capacity in 30 minutes. 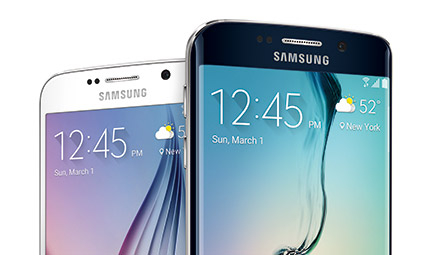 Both the S6 and the S6 Edge run on Samsung processors, and Sullivan attests to the speed of the S6. Stern notes that the octo-core processor and 3GB of RAM keep things running “at record pace.” Sullivan says that he noticed “no lag at all” when he turned on HD video in split-screen mode and began launching and using apps. And the new Galaxy phones also sport an updated fingerprint reader, which is used to log into the phone and for mobile payments. Sullivan says the setup process is similar to that of the iPhone 6, though he thinks that the S6 reader might be slightly faster to respond than Apple’s reader.

Stern agrees, and notes that she didn’t encounter any error messages when using the sensor. The improved fingerprint reader will be of increasing importance when Samsung launches its Samsung Pay mobile payments platform, which will be based partially on technology from LoopPay and will launch on the Galaxy S6 and S6 Edge in the United States during the second half of the year.

But the S6’s user experience struggles to measure up to the iPhone, or even to other Android phones like the Moto X and Nexus 6. Samsung has pared back the TouchWiz Android overlay, reducing the apps, widgets, and features that got in the way of navigating and accessing the core functions of previous Samsung phones, and  revealing more of Android’s Material Design in the process. TouchWiz has been stripped down to a limited set of features that Sullivan says can “legitimately help productivity.” The screen-splitting feature enables users to pull a phone number from an email and punch it into the phone dialer also visible on the screen, or save the number in a bookmark on the home screen for dialing later. 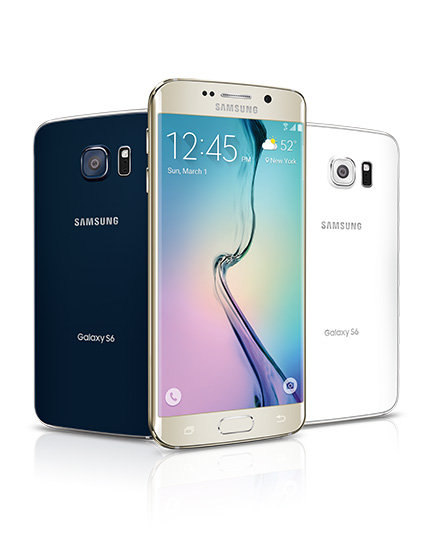 How much do they cost?

Sprint has said that it will sell the Galaxy S6 via its leasing program, which starts at $80 a month, and the Galaxy S6 Edge will cost $85 a month. The carrier hasn’t yet announced its contract and off-contract prices, but Sprint’s Boost Mobile will offer the Galaxy S6 Edge for $650 without a contract, which offers an indication of what Sprint will likely charge.