How to Buy an Apple Watch 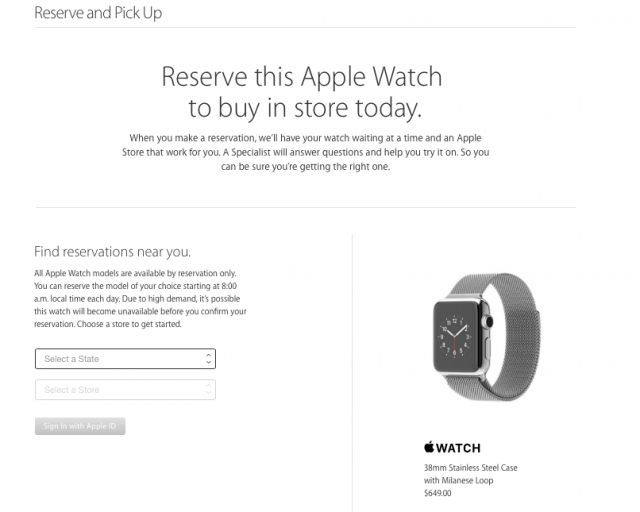 Since the Apple Watch’s much-anticipated launch, Apple’s first smartwatch has been available to purchase exclusively online thanks to inventory shortages. But the Apple Watch’s online-exclusive availability is finally changing with the launch of a new service that enables users to reserve an Apple Watch online and pick it up at their local Apple store. Reserving a watch online and picking it up in-store is a great choice if you know you want to purchase an Apple Watch, but would prefer to look at your selected model hands-on before buying to be sure of your choice.

Chance Miller reported for 9to5Mac that Apple launched a new “Reserve and Pick Up” system for Apple Watch customers in the United Kingdom, Australia, and several other countries as local time brought the date to June 17. The system has since also gone live to the online Apple Store in the United States, where users can click “Check reservation availability” on the page for a specific case and band combination, like the Apple Watch with a 38mm stainless steel case and Milanese Loop that we chose above.

To check the reservation availability of a specific model, Apple prompts users to choose their state and nearest store, and then if stock is available, to sign in with their Apple ID. From there, they need to request and verify a registration code via a text message to complete the reservation. Once a user has made a reservation, he or she can try on the Apple Watch in-store before making the purchase.

Shoppers will have a limited amount of time to pick up the selected watch before it’s returned to the store’s stock, and they can only book one reservation at a time. Availability will reportedly be “sparse,” according to Miller, and will be limited to select models of the Apple Watch.

Apple says that all Watch models available in-store are offered only by reservation, meaning that you still can’t walk into your local Apple store and buy one without reserving it online before you walk inside. Reservations begin at 8AM each day, and Apple has warned users that stock can change before they complete the reservation process due to high demand. The company had previously indicated that in-store availability for the Apple Watch would begin about two weeks from June 4, so the launch of the reservation program seems in keeping with that timeline. The new service also seems to indicate that supply is beginning to even out with demand.

Jonathan S. Geller reports for BGR that since the Apple Watch was released on April 24, it’s been a difficult device to purchase due to tightly constrained inventory. Until Apple opened the Reserve and Pick Up service, you could only purchase a watch online, either with a sales associate at an Apple store or by going to Apple’s website and ordering one yourself. Apple opened preorders ahead of the device’s official launch, and only some of the people who preordered the device had actually received one by late April. Many more users didn’t receive their Apple Watches until sometime in May, or even in June, depending on when they placed their orders.

Of course, if you’re positive about your Apple Watch selection, and would prefer to wait for it to ship than to make the trek to a local (or not so local) Apple store, you can easily order your Apple Watch online by selecting your chosen case and band combination on Apple’s website. The Apple Watch is currently available to purchase online and in retail stores in the United States, the United Kingdom, Australia, Canada, China, France, Germany, Hong Kong and Japan. And beginning on June 26, the Apple Watch will also be sold in Italy, Mexico, Singapore, South Korea, Spain, Switzerland, and Taiwan.