How to Know What Your DNA Says About You 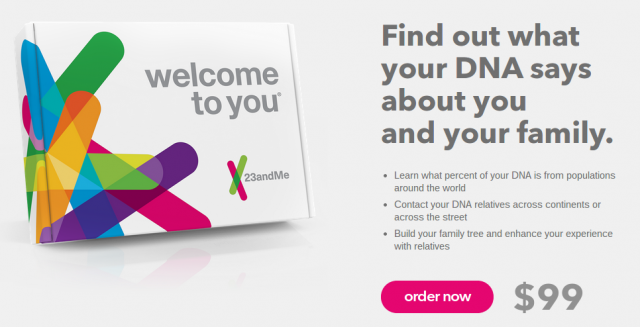 In the ten years since the first human genome was sequenced, the time and cost of obtaining raw genetic information has dropped to an almost unbelievably low level, putting the ability to know your own genes and what they say about you and your health in the future within reach. So how can you decode your DNA and find out exactly what your genome has to say about you? In theory, it’s simple.

Sounds simple enough, right? The mechanics of the direct-to-consumer genetic testing provided by 23andMe, a frontrunner in the industry, was that streamlined — until the Food and Drug Administration ordered 23andMe to stop selling its DNA health reports, which it said were illegal since they’d never been approved by the agency. Since then, it’s gotten a little more complex to find out exactly what’s in your DNA. Now, the process looks more like this:

It used to be that the same lab that tested your DNA would look at the results and tell you what they mean — but not anymore. The regulations on access to genetic information are just taking shape, but the FDA’s prohibition of 23andMe’s health reports has given rise to the popularity of new class of services, ones that just provide interpretation of raw genetic data.

A DNA test typically costs between $99 and $199, and you have a choice of providers, from 23andMe to Ancestry.com to National Geographic’s human ancestry project. Similarly, you have several choices of services to interpret the raw genetic data that your test will yield, including Promethease, Interpretome, LiveWello, and Genetic Genie.

Using a web service called Promethease, for example, users can upload their raw 23andMe data and receive a report that interprets the information and divides their genes into “good news” and “bad news.” As Technology Report explains, increasing numbers of consumers are uploading their genetic data into websites like Promethease, which have become the “largest purveyors” of consumer genetic health services (and could become the next target for regulators).

As Technology Review reports, Promethease began as a two-man side project run by geneticist Greg Lennon and programmer Mike Cariaso. It compares a person’s DNA to entries in SNPedia, a public wiki on human genetics that Lennon and Cariaso created and run with the help of “a few dozen” volunteer editors. The concept was to build a wiki, modeled on Wikipedia, to keep track of what scientists were learning about each gene variant. SNPedia now includes information on 57,000 gene variants, and through Promethease is used to build as many as 500 gene reports a day.

Many consumers arrive from 23andMe, which notes on a relevant page on its website that it can “no longer offer our health-related genetic reports to new customers,” who will receive ancestry information and their uninterpreted raw genetic data when they purchase the Personal Genome Service.

While DNA data is now relatively easy to gather, it’s significantly more difficult to find the exact medical meaning of the results. As Technology Review explains, consumer DNA tests determine which common versions of 23,000 genes make up a person’s individual genotype. While variants have been linked to risk of diseases, using genetic information to predict risk is an inexact science. David Mittelman, the chief scientific officer of Gene by Gene, tells Technology Review that he doesn’t consider risk assessment based on genetic data to be “mature enough to be a consumer product yet.”

The FDA cites the risk that incorrect interpretations of raw genetic data could lead consumers to seek out unnecessary treatment, drugs, or even surgery. As Technology Review notes, the banned health reports that 23andMe provided with its Personal Genome Service attempted to merge a variety of risks into one neat score — an approach opposite to Promethease’s choice to keep genetic risks and their potential links to diseases separate. Researchers haven’t figured out how individual risks interact, and consumers need to be aware of the imperfect nature of the results that they’ll receive, and be prepared to look at them as a starting point for a conversation with a medical or genetics professional.

Since DNA information is essentially digital, consumers can take a test and obtain raw genetic data from one provider, and take that data and get it analyzed elsewhere. That will make the industry difficult to regulate. When contacted by Technology Review, the agency said that it has the authority to regulate software that interprets genomes — even if the services performed with such software were given away for free.

But Lennon tells Technology Review that he considers Promethease beyond the scope of the FDA’s regulation. Unlike 23andMe, the service doesn’t provide kits or conduct tests itself, but simply operates as a “literature retrieval service” to present the same information that one could find in scientific journals. In Lennon’s view, if the FDA regulates Promethease, it would also have to regulate WebMD and Wikipedia.

Following the FDA’s action to stop 23andMe — a company led by Anne Wojcicki (wife of Google cofounder Sergey Brin) and originally hailed as the Google of personal health care — from selling its reports, traffic to sites that provide interpretation of DNA tests has jumped. Technology Review reports that Interpretome sees 80 to 100 visitors a day, and Promethease averages between 50 and 500 reports each day. Those numbers illustrate that people see real value in the imperfect assessment that a DNA test and its interpretation can provide, and they’re willing to seek out ways to find the information that they want — even if the FDA keeps it from being neatly packaged together for the time being.

Many consumers who are determined to learn what their DNA holds are looking for some measurement of risk — diseases that they’re genetically predisposed to develop, or weaknesses that might inform proactive lifestyle changes. But assessing that risk completely would essentially require the interpretation of a language of which our current understanding is very incomplete. While services want people to able to understand their genetic data, the reality is that science still understands very little of the language of the human genome. But for many, some knowledge of what their genes hold is better than none, especially in the quest to know and quantify the self as deeply as is possible.